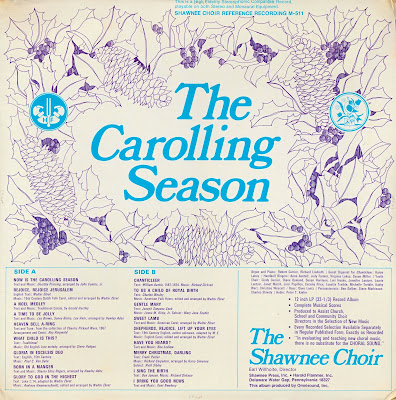 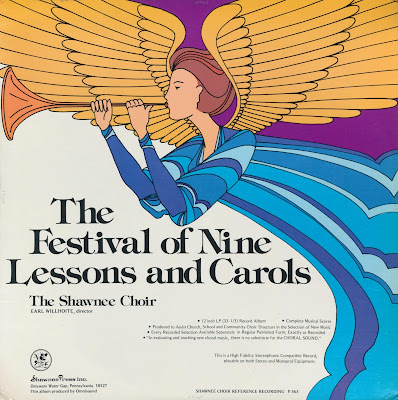 Here are the other two wonderful Shawnee Choir "reference recording" LPs ripped and scanned for this blog by Brad, the King of Jingaling.  Speaking of, be sure to check Brad's site for the Line Material booklets from 1956-62 (save for 1957).  I had hoped that maybe I had a 1957 LM brochure sitting around, but memory told me mine was the 1960 catalog.  For once, my memory was correct.  Oh, well.

I suppose that, if your church has a first-class choir, these LPs would make fine reference recordings, but not many church choirs are on or near the level of the superb Shawnee outfit.  Whatever.  All I know is that lovers of brilliant choral performances live to find LPs like these.  Well, if they're into vinyl.  If they have a phonograph.  Then again, with folks like me, Brad, Ernie, Buster, and all the other vinyl bloggers digitizing audio media of old, I guess it's not necessary to own a phonograph to enjoy vinyl.  Amazing.  I made a claim, and then I obliterated it.  But I'm a good sport about such things.

What am I babbling about?  Don't ask me.  It's mild migraine time, I'm afraid.  That's what I'm dealing with right now as I type--a light migraine with occasional stabbing pains and a general feelings of "I'm not real."  That not-quite-here feeling is one of my psychological migraine symptoms--I also, on rare occasions, have audio hallucinations, OR my sense of smell is altered.  I've read that the pain aspect of a migraine is caused by inflammation outside the brain, whereas the neurological symptoms--an altered sense of smell or a not-quite-here feeling (in my case)--are caused by inflammation of the veins inside the brain.  What a wonderful thing to be discussing when we're about to hear exquisitely performed holiday music.  So, just leave me to my migraine, and meanwhile the Shawnee Choir will make anything-but-easy choral arrangements sound like child's play.  Absolutely gorgeous stuff here, and thanks again to Brad.  I had planned to get these up sooner, but you know the old joke: If you want to give God a good laugh, tell him your plans.  I guess that applies to both grand plans and to the little ol' plans of bloggers.

The Festival of Nine Lessons and Carols)--The Shawnee Choir (1977) 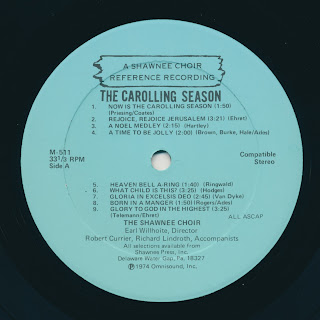 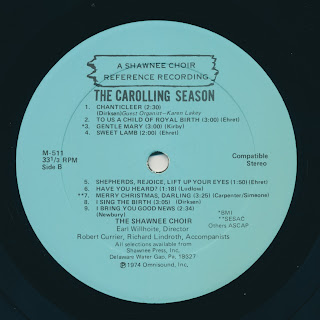 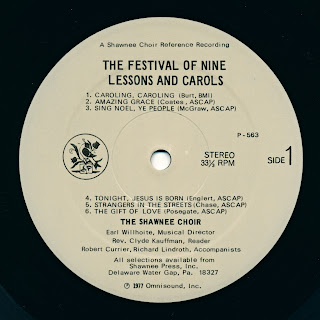 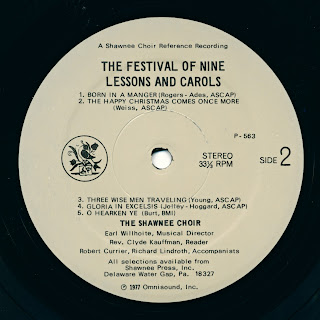 Hi Lee, I hope your migraine has subsided and your feeling much better. As always, your words on the blog are precious. You really come up with some zingers or whatever they are called. I love this: "If you want to give God a good laugh, tell him your plans. I guess that applies to both grand plans and to the little ol' plans of bloggers". I am going to print this out and frame it. I hope you do not mind, but I will change the word bloggers to the common man. Brilliant.
Thank you for these two new, uh old, Shawnee LPs. Bryan

Thank you, Lee & Brad both. These will fit well into the 2020 Christmas downloads folder. I don't start a 2021 folder until near the middle of the year. Most of the stuff I find at the beginning of the year was actually from last year, so the folder stays open for a while. :)

Happy to share. We've got a great Christmas music community out here and I enjoy collaborating with the great folks I've gotten to know over the years.

Never heard that track before--thanks! I think I first encountered the saying in a magazine interview with jazz pianist George Shearing.

Thanks again! I'm glad to be part of that community.