Whittemore and Lowe--"Pop Hits on Two Pianos," plus bonus tracks 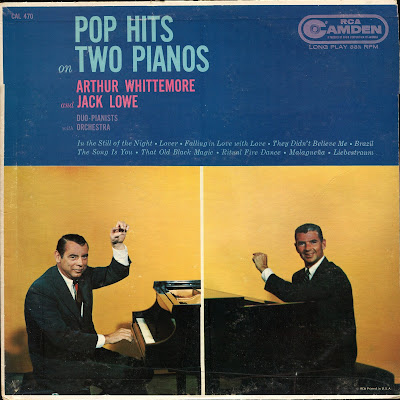 The 1959 RCA Camden LP, Pop Hits on Two Pianos (above), reissues nine of the ten tracks from the 1946 Whittemore and Lowe 78 set Two Grand. which RCA had the duo pianists redo, under the same title, in 1956, possibly having decided it wasn't grand enough.  Anyway, the Camden LP omits The Continental, so I ripped it from my 78 copy and inserted it as a bonus track, because I'm like that.

In addition, from shellac in my collection, we have two 1948 orchestra-less sides, plus two 1951 prepared-piano numbers that also qualify as "tape music," given the tape effects therein (quick splices, delay, possibly some speed manipulation), so you can't say without fear of rebuttal that I've scrimped on the Whittemore and Lowe.  By the way, Ernie was the person who brought the prepared piano sides to my attention a while back.  Thanks, Ernie.

Arthur and Jack were kind of a less flamboyant Ferrante and Teicher, and they were first.  Like F&T, they did light classics, pop standards, Broadway, and even country, but in a more laid-back way.

(With orchestra conducted by Russ Case, 1946)

(Without Orchestra; dates courtesy of Buster)

Hi Lee - This looks terrific. The dates for the three unknown items are as follows, per the A Classical Discography website:

W&L recorded quite a few classical items for RCA.

I'll have to bookmark that discography.

I did that? Hmmm, must have been a while ago. I do remember seeing these guys on your blog back in the day, and I've picked up a few of their recordings. There's a kiddie LP from them, I think, that I've been meaning to rip. Thanks for sharing this one, and the bonus tracks!

Thanks for the bonus tracks, Lee - I already have the album.