Proof that anything is possible: A professionally done cheap-label LP cover! 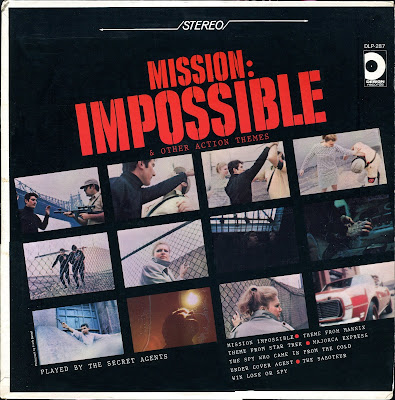 Discogs lists the year for Mission: Impossible and Other Action Themes as 1967 for the Canadian issue, and 1968 for the U.S. issue.  Note that the cover contains the mono prefix "DLP," but with "Stereo" at the very top, which saved the label, Design, from having to print "SDLP."  (A triumph of ink-saving.)  Meanwhile, in its Design discography, Both Sides Now assigns this catalog number to Richard Hyman's Genuine Electric Latin Love Machine  (the what?), which is a typo, of course, because Hyman's LP came out on Command, not Design.

At the time, that all seemed interesting and worth sharing.  I have no idea why.

Anyway, today we have the Secret Agents (yeah, sure) performing the M:I theme, plus "other action themes," which include renamed versions of Sabre Dance. Gliding Dance of the Maidens (a.k.a. Stranger in Paradise),  Funeral March of a Marionette (a.k.a. Alfred Hitchcock Presents), and Dance Macabre. Theses have been re-titled Under Cover Agent Theme; The Saboteur; Win, Lose or Sp;, and Majorca Express.  Action themes.  Ohhhh-kay.

After all, what is a cheap label to do?  Use legit action themes for the filler tracks?  Actually, for once, the genuine titles outnumber the cheats--a full five of this album's eight tracks are actual TV or movie themes.  How did that happen?  Was Design's quality control slipping?

The musical results are much better than we can logically expect, in large part because the Secret Agents are first-rate musicians, despite some shaky arranging,  abrupt and awkward fade-outs, and a total playing time of under 21 minutes (!).  Everything sounds under-rehearsed, though there are some superbly performed moments (e.g., the closing of Majorca Express, which makes up for the rest of the track).  And the discotheque version of Star Trek is far out--groovy, even.  This collection has its moments, and then some.  Even the sound quality is good.  Someone got fired; I just feel it.

Actually, the most amazing thing of all would have to be the jacket--a cheap-label cover that looks like some love went into it, and which actually relates to the material!  But they did one thing right--they printed the jacket titles in the wrong order.  Whew.  So it's not the end of life as we know it.

Mission: Impossible
Theme from Star Trek
The Spy Who Came in from the Cold
Win, Lose or Spy
Theme from Mannix
Under Cover Agent Theme
The Saboteur
Majorca Express

Posted by Lee Hartsfeld at 3:32 AM

Are you trying to record all these budget label beauties so you can see what tracks got reused where? Or is there some other sinister reason behind your torturing us with such things?

I sense they're not your cup of tea?

Oh, I'm probably as guilty as the next guy about looking at them or occasionally buying them. But to actually listen to them, that's just beyond me. :)

I'm a lover and a listener to these Low Budget albums. This one is far better than I thought it would be. Thanks!

Yes, it is! I had pretty low expectations, but everything about it is a surprise--especially the quality of playing and the good sound quality.