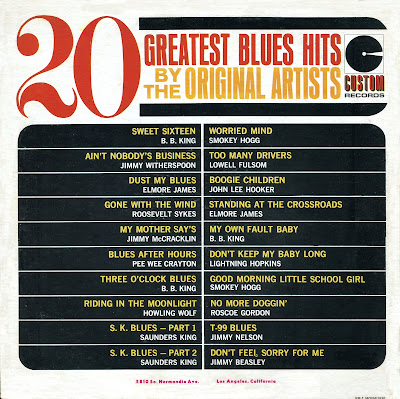 Even without looking at the list of performers, you know this is going to be a great blues LP, because Custom was part of the Crown label family, which included Kent, United, and Modern.  Cream of the crop.

The problem, however, happens when twenty tracks are jammed onto a single LP--you know that some of them have been edited, and at least one has (and drastically)--Howlling Wolf's RPM label classic Riding in the Moonlight, which contains none of the fabulous instrumental sections.  Auggh!  Skillful scissors work, but still....

If you haven't experienced the original, please do so: Riding in the Moonlight.  Youtube also has the demo version(s) of the tune.

I'm not familiar enough with the rest of the tracks to know what's been clipped and what hasn't, but I have my suspicions--John Lee Hooker's Boogie Children, for example, seems to go by too quickly.  Not sure.  But, with the exception of the Wolf track, clipped classics are better than none.  And these budget LPs were typically found in dollar bins, and as far as blues for a buck go, no complaints.

The artists are all terrific, and, with the exception of Smokey Hogg, they know where they're at in the chord scheme and are able to count four to a bar.  (Lightning Hopkins' quirky counting is okay, because he's self-accompanied.)   I feel for the musicians who attempt to accompany Mr. Hogg on his two numbers.  Until I heard Smokey, I thought John Lee Hooker held the patent to keeping his musical partners at least two beats ahead (or behind) of wherever he happened to be going.  Listen to John leaving the band utterly lost on this Shake, Rattle and Roll rip-off: Shake, Holler and Run.  Jump ahead, hang behind, call it a wrap.

Lee
Posted by Lee Hartsfeld at 2:12 AM

Edited to death, compressed to within an inch of their lives and mastered at a level barely out of the surface noise. That's how you cram so much music onto a single disc! At least that's how K-tel did it back in the day. And Ronco, can't forget about Ronco!

Thanks, Lee - some of these records were none too long to begin with. Can't wait to hear what's been done to them.

Cram it all onto one, but with tunes like this many would have bought a two-volume set. And did the audience these were directed toward care about sound quality? Thanks, Lee.

Thanks Lee. The cheaper the better I always say!