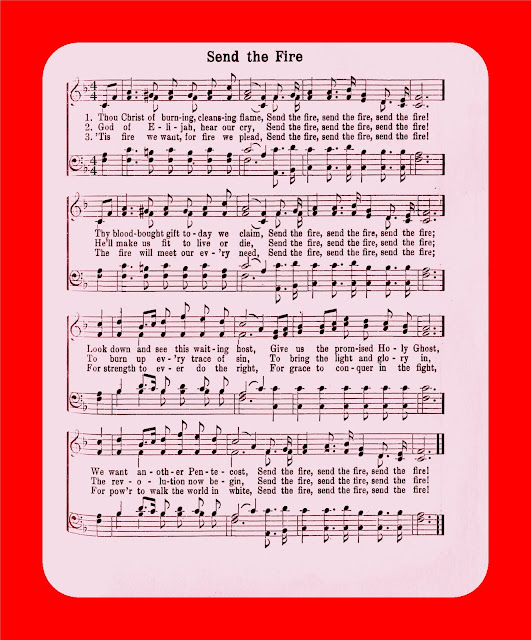 I meant to get this up yesterday, but various irl stuff interfered (how dare it??), plus there's "something" going around, and of course I have it.  I've been through bronchitis twice this summer, and I really don't want a third round.  I mean, thanks, germs, but go bug someone else.  (Ha, ha!  Bug someone else!)  But I hope to get this up and going in a jiffy.  Or a skippy.  (Dated peanut butter references, there....)  And always avoid dated peanut butter.  Won't kill you, but it has little flavor.

Send the Fire, the seventeenth track on today's playlist, was a happy find, as I had the music in a 1940 songbook, but no recording.  I was delighted to get it on vinyl.  Unfortunately, singer Paul McNutt renders the number in a manner that can only be described as overly overwrought.  But, besides being a cool tune, it has historical importance, since its 1894 words are by no less than the founder of the Salvation Army, William Booth, and its tune was provided Frederick Booth-Tucker (or, Frederick St. George de Lautour Booth-Tucker, thank you), the son-in-law of William.  As someone with no middle name and a single-syllable given name, I kind of envy Fred.  Or maybe not.  Anyway, great to have a version of this tune (see sheet music above--also hard to find, in my experience), and you certainly can't fault it for lack of enthusiasm.

Two -athons today: four versions of Charles H. Gabriel's monster 1900 hit (said to have sold around 20 million copies in print--and I believe it) O That Will Be Glory, and another four-pack (also by Gabriel), 1922's Jesus, Rose of Sharon, with lyrics by Ida A. Guirey.  My favorite Sharon is the Bill Carle version, with its superb arrangement that brings out the genius of the melody, but tenor Russell Newport is the best singer of the bunch.  As for Glory, it shows up on LP and 78 labels as O, That Will Be Glory; Oh, That Will Be Glory for Me; That Will Be Glory; or The Glory Song.  I'm not aware of any Halloween parody titled That Will Be Gory, but you never know.  Hard to pick a favorite version, though I might go with the Haydn Quartet's 1906 take, since it's the closest to the year of the original, and because it showed up in Goodwill years back with an overlapping crack. (Accidental rhyme, there.)  "No way I can save this," I said to myself.  Wrong--I saved it.  The memory of rescuing this precious disc makes it an especially precious version.  Or whatever I just typed.

Jerome Hines, the Metropolitan Opera bass who made religious LPs for Word and London, did the all-time, this-is-how-you-do-it version of the gospel classic How Great Thou Art, whose history is too complicated to even go into.  Ages back, I was thrift-searching for a version of How Great Thou Art and found Hine's 1965 Great Moments of Sacred Music at Salvation Army.  It had the track, and I remember thinking, "I wonder if this guy's any good?"  Had no idea who he was, and I guess I didn't read the back jacket.  Took it home, cleaned it, put the needle on the record, then picked myself up off the floor.  Yeah, the man could sing.  Dear God.

It is the version of How Great Thou Art.  George Beverly Shea had much to do with popularizing the number, and all praise to George, but Jerome owned it. By the way, it was an unforgivable insult to the born-again Hines, who gave free Salvation Army concerts in NYC (my foster mother Bev saw him at one), to have little to nothing about his faith mentioned in the press when he passed in 2003.  "Secularism" was all the rage at the time, and so journalistic integrity went down the gutter--with one major exception, and I wish I remembered the name of the magazine or paper--it was a beautiful piece by a close friend of Hines.  Look, I don't care if, as a rule, journalists are seculars, Fundies, none of the above, members of the diners club, or closet ping-pong enthusiasts--when you write an artist's OBIT, you don't omit a major aspect of someone's life.  Period.  The Fourth Estate likes to demand respect.  I remind the Fourth Estate that respect is something earned.

Back to topic, Reapers Are Needed and Awakening Chorus are two more Charles Gabriel goodies (he's all over my favorite-gospel posts--you'd think I was fond of him) I've featured before, but they're worth a repeat, and then some.  I love the way the choir speeds through the latter anthem, which is meant to be more stately, but am I complaining?  The faster tempo works terrifically.  Finding a decent recording of the Chorus has proven about impossible--two substandard choir versions (one all-female, the other all-male), and some organist who sounds like he had four lessons and slept through three of them (on the Word label, where the quality is usually way higher than that).  This race-through version is by far the best I've found.

A Meeting in the Air--or, The Meeting....  A or The, it's the same song, and the choirs here are top-notch, with the Wilds (I thought maybe that was a family name) actually a Christian camp for young folks.  The LP notes aren't clear on exactly who's doing the singing--staff members are mentioned but so are camp members.  Dunno.  I just know they're very, very good, and the stereo sound is very natural and pleasing--no gimmickry.  Meeting works surprisingly well with Beyond the Sunset.  I'm almost sure the arrangement is by the talented Frank Garlock, who also did the fine arrangement of Higher Ground (Gabriel, who else?) for the Southside Baptist Church Choir of Greenville SC.  The stirring Wonderful Grace of Jesus, performed by the you-just-know-they're-all-top-studio-pros Revivaltime Choir, is a 1918 gem which, like Meeting, was not by Charles Gabriel.  Just to note that I don't focus fully on Chuck.

Back to Gabriel, we have the superb Old Fashioned Revival Hour Quartet's incomparable recording of Chuck's sophisticated and eloquent (he did the words, too) I Will Not Forget Thee, composed in 1889, a year before Gabriel hit the big time in a big way with Send the Light.  Gabriel was sometimes a near-match for the greatest popular hymnist, Fanny Crosby--dig these: "When at the golden portals I am standing, All my tribulations, all my sorrows past; How sweet to hear the blessed proclamation, 'Enter, faithful servant, welcome home at last.'"  Do we get exceptionally distinguished gospel lyrics like this today?  Not too often, it doesn't seem.

Tramp on the Street uses less elegant language, but it's message is complex and powerful--I remember the first time I heard this, and the emotional wallop of the tramp on the street becoming Jesus Christ.  I used to know more about this song's history, and I have an early version of it in print.  From the 1880s, I believe, and originally titled Only a Tramp.  For people who don't think country/bluegrass gospel ever gets deep.

I could have summed up my essay more simply: Fabulous songs put across by highly gifted musicians.

You certainly have a lot of favorites. :)

I do enjoy these selections!

Have been feasting on How Great Thou Art and Send the Fire today, will get to the others once I've had my fill of these, may take awhile.

Send the Fire is a wonderful hymn. I remember coming across it in an old song book years ago. Inspired words and nice music. I'm very pleased to finally hear it recorded. You've made my week!

Ernie--Yup, I've got at least one more part coming. These are a bear to put together, but no one said blogging was easy. Or maybe someone did. Actually, I don't know. I never said--that I'm sure of.

Buster--Glad to hear. What's really cool is that two of the selections were last-minute finds. They're so good, I bumped two other selections to include them. (I hope the bumped selections don't sue....)

Larry--Cool! So happy to hear that, and happy to discover I'm not the only "Send the Fire" fan. I've yet to encounter another version, but this one has enough fire for five. (Hm. That could be a Pentecostal pun....) I didn't know, until I went to the great Cyber Hymnal, that Booth had written the words!

Another one of my favorites is Sweetly Resting (Mary D James 1875, music W. Warren Bentley), just in case you have an old time recording of it and are willing to take a request. (he said with a friendly smile)

That one, I don't have, unfortunately. Just played through it at Cyber Hymnal--very nice. I'll keep an eye out for the title--I get 78 lists from a dealer on a fairly regular basis.

Lee,
The sound you coax out of those Acoustic Victors is a triumph in itself. Stunning! Thank you for all your hard work, and for sharing it with us.
Zoomer

Zoomer, My pleasure, and thanks for the nice words. The acoustics are always a challenge, but my VinylStudio program--buggy as heck, but indispensable--does the most important function by changing the curve turnover points to 0 db (acoustics have no response curve, essentially), so then it's a matter of tweaking the results with my parametric and graphic equalizers. I usually do it in two "saves" of the file. Minus restoring acoustics to their original non-curve, so to speak, all restoration efforts on the things will sound muddy at best. And plenty of commercial efforts are done ineptly, despite the availability of inexpensive software to correct the response curve.