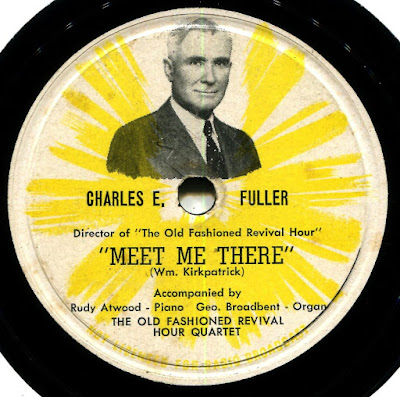 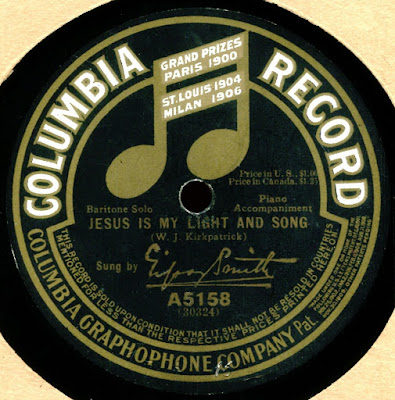 At the moment (Saturday evening), I'm re-ripping a few 78s, as I discovered to my amazement that I had connected the lead wires incorrectly on my Stanton 500.V3!  I was going to experiment with getting lateral-only response (which, it turns out, takes more than just switching the pins), and I realized the cartridge was wired wrong!  When I originally hooked it up, I had followed the same pattern I've always followed, but the pins on this cart are not in the usual order.  Oops.  Oddly enough, the pins are in the conventional order on my "HiFi" Stanton cart.  Oh, well....  Now I'm going to wonder how many sides I've ripped up till now with the wrong wiring.

The 78s I'm redoing include a 1910 78 rpm appearance of British evangelist Rodney "Gipsy" Smith, who had a pleasant, strong voice--one which registered superbly on/with the acoustical process (standing in front of a big horn).  He sings Jesus Is My Life and Song, which is new to me, even if this disc is 109 years old.  The flip is a fabulous Ira Sankey hymn, When the Mists Have Rolled Away, beautifully sung by Harry Anthony and James Harrison.  We don't post junk here.  (Well, unless you don't like gospel!)

Also re-ripping a cool but slightly wonky version of Herbert Buffum's The Old-Fashioned Meeting, sung by C.G. Emanuel ("The Singing Evangelist"), whose weird sense of counting is not something accompanists like to deal with.  And the guy on the piano is none other than Robert Harkness, the famous Australian gospel composer and pianist.  I'm guessing the year at about 1922--can't find a thing on the label, Hollywood. Other Hollywood labels show up, but not this one. I wonder if the other releases on this label sounded as lousy.  I did what I could.  But there's no way I'm not going to post a vintage version of Old-Fashioned Meeting.  Flip is nothing special, but it's okay, though the piano/vocal conflict is even more pronounced.

No year, either, for the Charles E. Fuller/Old Fashioned Revival Hour Quartet version of Meet Me There.  At this point in his life, Charles' singing voice was shot, but he can't be faulted for a lack of enthusiasm, and he's even willing to make fun of himself.  I like him.  I'll have to scan the picture label--it's awesome.  The quartet is superb, as always.

And I have to hurry up and get this written.  The Banner of the Cross sounds like a modern number in this version by the Bob Jones University Male Quartet, but the music is actually from 1885.  I'm not crazy about this rendition, but the song doesn't show up that often.  Extremely hill-style singing by on the 1927 I Know My Name Is There and Are You Washed in the Blood of the Lamb, and the sound is less than pristine (beat-to-death 78s never sound pristine), but I got good files out of it.  I better have--took me a good while.  And... a group called the Burden Lifters just has to be good, and by golly, it is.  A thrift gift from Indiana from Diane, and I thank her.  A group like the Gospel Mariners was one of the last things I expected from the ultra-cheap Hollywood label (no relation to the 78 rpm Hollywood, far as I know), and they're really good.  Had to dress up the sound, because the pressing is junky and someone played it a lot.  Which was their right.  Why buy a record if you're not going to play it?  Just wish they'd used either a lighter tonearm or a less worn needle.  And Burl Ives shows up with a classic gospel number from 1885 (that year again), Bring Them In.  Burl's a bit out of place in this lineup, but I like variety.  For some reason, on the file I gave Philip Bliss the credit, but it's actually by Alexcenah Thomas (words) and William A. Ogden (music), says The Cyber Hymnal, which I trust.  Best site on the internet.

And we get yet another City of Gold.  This one has nothing to do with Fanny Crosby's hymn.  To the gospel....

Posted by Lee Hartsfeld at 8:28 AM

That label is indeed awesome!

I'm so happy that my shot-in-the-dark choice of The Burden Lifters made your list! There's so much gospel-faith-sacred stuff in the bins here. But it's not a genre about which I know much. Know that it's a joy for me to help feed your voracious blog. (Your playlists are always so generous!)

Thanks, Buster! I wasn't even sure I could get an acceptable file from the disc (it's a G+ at best) but I'd have shown the label, anyway!

The Burden Lifters are right on the mark--and what a name. Thanks again! And my gospel playlists are pretty large--larger than I anticipated. Part of it is all the stuff I'm accumulated over the years (and the 1/3 of it I've kept), plus lucky new finds. It's hit-or-miss with gospel. Another of your gospel finds was good, but it's been played to death. But now that I've discovered my wiring error on my Stanton 500 cartridge, maybe my wider LP needle will work on it. The cart's pin arrangement isn't the standard one, and I had failed to notice that! My custom LP styli weren't working right, and now I know why.

Had do so some grammar corrections on my previous answer!