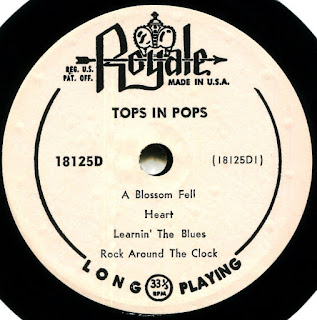 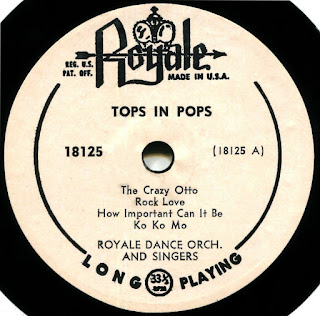 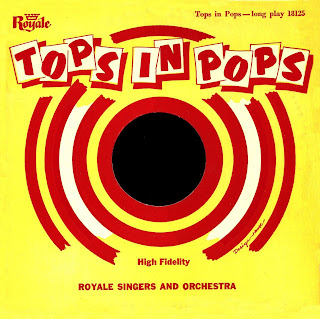 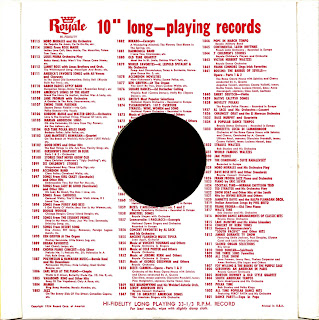 Two 10-inch Tops in Pops on Royale--the perfect music for Thanksgiving.  Actually, these are a pair I recently found on eBay quite cheap, and the discs looked to be in fine shape in the ad photos.  And, sure enough, they are.  Of course, this is the Royale label, so I had to deal with pressing imperfections, but I was able to edit nearly all of those out.  I wanted to share this before starting my Christmas posting tomorrow, so....

We've heard some of these before at the blog from the Today's Records label and a Royale 12-incher, An Hour of Tops in Pops, but the Today's Records versions were edited, and only four are dupes with the LP--which, at the moment, has a dead link, because I used Zippyshare.  Anyway, I boosted the bass on the four pop tracks on Royale 18125--the Classical theme Fox Trots had enough bass already.  And, while four Fox Trots are listed on the label, there are only three bands.  Royale quality control in action.  The Fox Trots are the usual bit of presenting familiar Classical airs in dance style, which by this point was as new as buttered bread.  Paul Whiteman, anyone?

Despite the D suffix, Royale 18125D has the exact same cover.  All eight tracks are then-current (1955) pop hits--no filler.  (How generous of Royale!)  This Rock Around the Clock fake may be the best of the many fake-hit versions, though the singer is a little off at times.  This is typical of the fake-hit RATC cuts, and the conventional explanation is that non-r&r musicians of the time weren't used to performing rock and roll.  Well, the backbeat--the accent on 2 and 4--hardly started with rock, and rock's boogie rhythms were straight out of big band.  What I think trips up the singers on this particular number, and sometimes the musicians, is the complexity of the syncopated triplet rhythms.  RATC's rhythms are trickier than the norm.  On at least one RATC fake (Prom, I think), the guitarist rushes the answer chords in the verse's "We're gonna rock around the clock tonight," thrown off by what the vocalist is doing.

This is a day for giving thanks for near-mint Royale mega-cheapies.  Tomorrow, Xmas begins here!  Odd Lots and CVS and a bunch of other folks beat me to it, but so it goes.

Beautiful music!
thanks a lot!
Regards

I always enjoy visiting your blog...