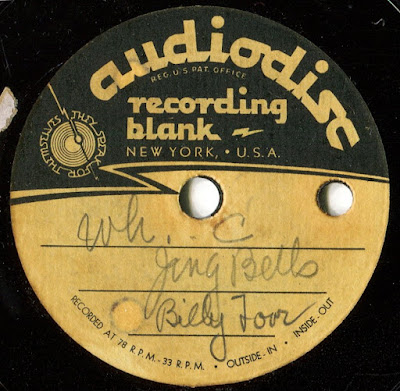 I found this in April and posted it.  The Zippy link is kaput, so I thought I'd repost.  Plus, it's Christmas.  (In my culture, "It's Christmas" means "Christmas is almost here.")

Once upon a time, people used disc-cutting machines to cut their own discs.  Eventually (during the 50s?), people switched to magnetic tape for home recording.  That's the history as I know it--it's probably a bit more complicated than that.  But here's a home-made Christmas disc by a very young man named Billy.  I know this, because on the second side Billy introduces a piano piece (nothing I recognize; sounds like a by-ear number) with the words, "This is Billy, making you a record for Christmas of (in?) 1948."  Thus I know the recording year.  Of course, Billy could have simply been the engineer, but I suspect he's the ivory tinkler, at least on side 2.  He's a decent player for a kid.

I'm designating the piano solo (which features a false start, followed by some Charles Ives harmonies, before it gets going) as side 2 because it contains no writing on the label; the flip (above) lists White Christmas and Jingle Bells as the pieces, and what looks like "Billy Four" as the artists.  So I'm assigning it side-1 status.  Problem is, there are only two musicians--tenor (?) sax and piano, so maybe "Four" (or "Lour"?) is Billy's last name.  Will we ever know?

Condition isn't very good (Maybe I should have employed some hiss filtering), but I used the curve marked "AFRS Transcriptions #1" in my VinylStudio program, and it brings the music out loud and clear over the disc noise.  AFRS, of course, is Armed Forces Radio Service, which eventually became Armed Forces Radio and Television Service (AFRTS), or "A-farts," as we called it in the Navy.  AFRTS would send my first ship videos to play over the closed-circuit system, and one night I was showing a program for the crew while watching a tape on another machine.  Meaning to fast-forward the other tape, I accidentally fast-forwarded the AFRTS program.  Knock on the door--a crewmember.  "Could you please reshow the last five minutes or so?" he asked.  Oops.

AFRTS programs always included Navy recruiting spots, and you can imagine the responses they received in our TV lounges.  Anyway, of course this disc has nothing to do with AFRS, but the curve sure matches up beautifully.


To Billy and the Billy Four: A Record for Christmas of 1948