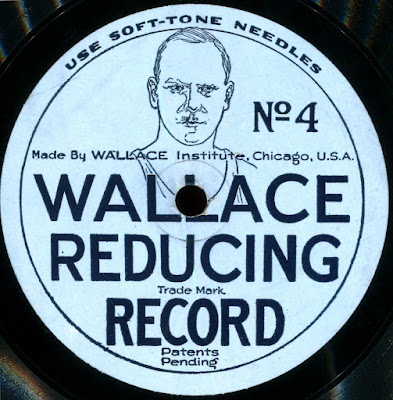 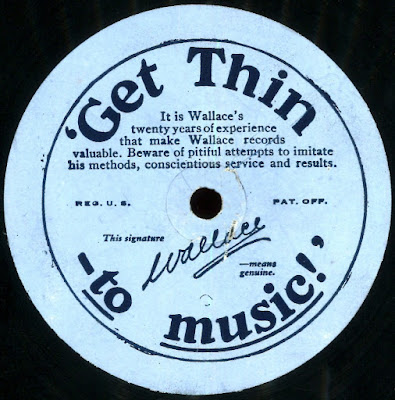 In case anyone wondered when I was going to get around to featuring weight-loss 78s from 1922, today is your lucky day.  At a Goodwill where 78s were the last thing I expected, a nice little stack of them appeared, along with some fun 45s.  The No. 3 and No. 4 Wallace Reducing Record--how could I pass them up?  I figured these must have been sold by mail, and this was confirmed on line by scanned copies of the Womens' Home Journal and The Cosmopolitan (back when it was a literary magazine).  The ad doesn't list the cost, since it's a first-record-free deal.  The one-sided discs came in an album with a booklet, neither of which came with this find.  Here's the ad: 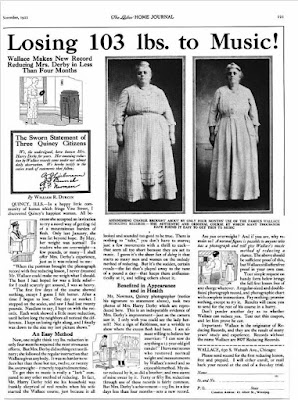 So, exercising to music is anything but a new idea in our pop culture.  Wow.  These two sides are repetitious, of course, but hilarious because of the period music.  Well, hilarious to me, anyway.  You might tire of them quickly, especially if you follow the exercises.

The sound quality goes to heck at the end of No. 4, and I don't know why--there's no visible wear or surface flaws.  It's a mystery.  Anyway, I wonder if anyone ever really lose 100 lbs. with these....

Here's the Wikipedia scoop on Wallace M. Rogerson.  His time-keeping ability is not the best I've ever heard....

Update: Looks like there were six one-sided discs, altogether.  Buster correctly notes that the drastic weight loss allegedly documented in the ad would be deadly, at least over such a short period.


Additional pics.  I'm fine without the booklet, after seeing a sample: 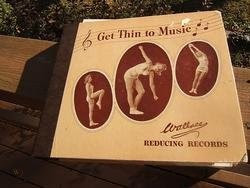 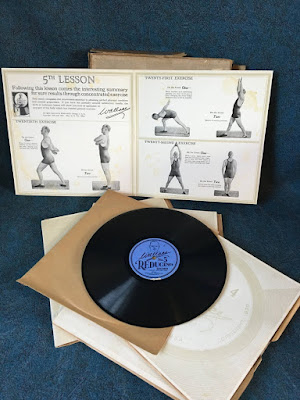 Wallace looks unpleasant. And if Mrs. Derby lost 103 lbs. in four months, it's a wonder she was around to provide the testimonial.

He has a "You will do as I command!" expression. Yes, come to think of it, that does sound deadly....

Years and years I've been waiting for something like this in my life! Now I've got to dig up volumes 1 and 2. Do you know if they ended at 4, or did they go on forever until you cancelled the subscription?

Looks like there may have been six of them. https://www.worthpoint.com/worthopedia/1941-thin-music-wallace-exercise-66120741 I found another Worthpoint page showing the 78 album and the booklet.

Time to get on the fitness bandwagon then.

I just find it fabulous that the concept goes back so far. Plus, the sides are so hilarious--in that "who knew?" sense.

First time I heard of any exercise 78rpm's was on The Dr Demento Show in the 70's I always wanted to hear the whole set
This is a wondrous find, Lee, I'm downloading with my exercise finger right away !
Many Thank You's Yes, it does look like Wallace is saying do as I say and do it right or be sure to refer to the book and in step (by step) and then repeat, what a novel idea, I wonder if Richard Simmons ever heard these !
Byron