Favorite gospel tracks, Part 9--I'll Live in Glory, Sweeter Than All, Hallelujah for the Cross 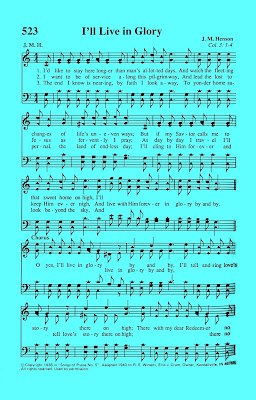 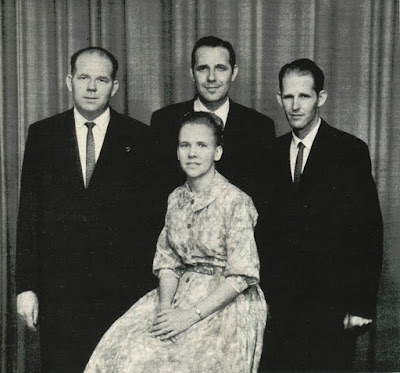 Our series returns, and no time for notes, as I'm getting ready for church... and I have some kind of stomach bug.  My low-grade fever has broken, however, so I'm not contagious--I hope.  A nice combination of mellow, slow gospel with peppy, down-home renditions with more mainstream treatments.  I think this phenomenon is called "something for everybody."  Anyway, as usual, I've tracked down lyricists and composers whenever possible, and I've found recording years whenever possible.  Two numbers by J. Howard Entwistle, probably best known for the music portion of Keep on the Sunny Side of Life, a number often falsely credited to A.P. Carter--these numbers are the lovely, unhurried Sweeter Than All, with lyrics by Johnson Oatman, Jr., and the lively The Hallelujah Side, which I've so far only found a choral rendition of.  You'll be hearing that rendition.

Oh, and "Travler's Quartet" is not a typo.  This group used both spellings--"Traveler's" and "Travler's"-- in its name.  Just depended on the LP.  Not to get too nit-picky, but it really should be "Travelers'," but no one asked me.

Recurring numbers for this series include There'll Be Shouting, Glory in My Soul, and Life's Railway to Heaven.

Another great and diverse folder Lee, thanks! Interestingly though, almost appears to be two different Stroll Over Heavens (or is that Strolls Over Heaven?) Never heard The Trav'lers Quartet's lyrics before now. Of course, sounds like they were ones to wing it anyway, with their treatment of Shake The Master's Hand. Wonder if Jimmy E. Jones and the Jimmy Jones who sung with The LeFevres were one and the same? The LeFevres recorded that song as well, got it 'round here somewhere. The Miller Family sounds a lot like The Lewis Family, IMHO and the first place I heard I'll Shout And Shine (although may have been listed without the I'll), was Carl Story. Speaking of first places, The Country Gentlemen's Calling My Children Home album, was the first version of Hallelujah Side I ever heard and associate it more with Bluegrass myself, so I kinda find it strange, that you've only heard a choral version. I'll personally try to send you two bluegrassical treatments I have here on the PC soon. My Heavenly Home has also been seen as That Heavenly Home, more frequently I might add. And once again, When I Wake Up To Sleep No More, goes a lot further back than the early '70s, written back in 1944, with a more-true-to-the-original version from The Coffey Family on their first album. Oh and I like those Earls And Whitehead cuts, but wonder when that trick of a guitar player putting his capo an octave higher started and how long it lasted? I believe The Looper Trio employed such techniques with their flat-top player (can't remember off the top of my head which one it was now), but I first saw it while practicing with a group in Danville, VA, unprofessionally of course. Not saying the technique was/is unprofessional at all, I was saying our group was LOL! I've rambled on enough, love and prayin' for ya!

Thanks, Josh. I'd love to hear bluegrass versions of "The Hallelujah Side." I just know it from songbooks and this version. Hymnary gives a year of 1944 for "When I Wake Up...." Didn't notice the difference in "Stroll Over Heaven," but I was rushing the post to deadline! I'll give them a closer listen. I put everything together night before Sunday and wrote the text in the morning. I'm very curious about the year and authorship of "My/That Heavenly Home," as I can find nothing about it, and I've searched my songbooks with no luck. Know of any printed copies?

Great to hear from you! Best as always, Lee

Lee,
Thanks again and I'll try to personally send you those cuts ASAP. I knew Wake Up was from '44, but have never seen the way it was originally intended. Of course, my blindness might make that a little hard, LOL! Seriously, I've heard a choir and maybe two groups do it the original way and one doing it the "new" way, with the third verse no one ever does! We'll consult the books here, for That Heavenly Home (which I've heard it done in three four and two or is that four four and I believe it's written in D Flat) and I'll send you a local version of that and Stroll along with The Hallelujah Side(s)! 'Til later, love and prayin' for ya!