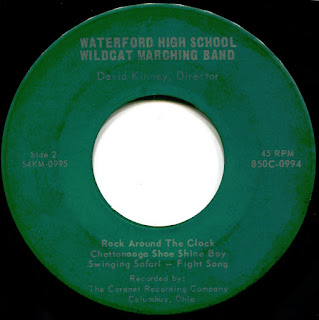 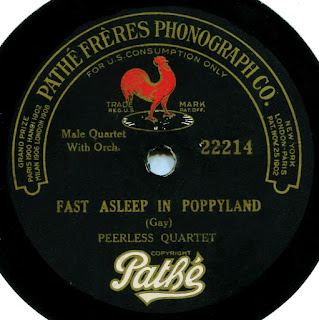 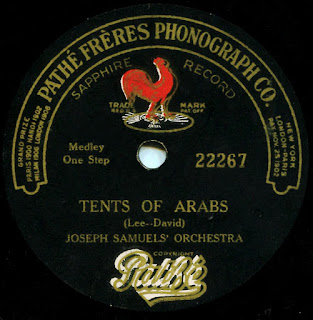 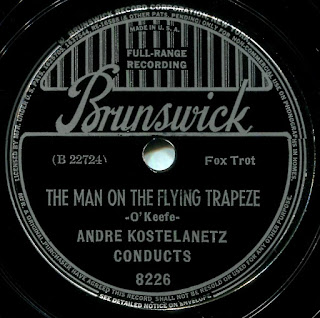 A few posts ago, I shared two items from a recent Goodwill haul--two Wallace Reducing Record 78s from a get-thin-to music album of 1922, possibly the first example of its type.  Today, the rest of that haul.

We start with three double-sided, vertically cut 1919-1920 Pathe 78s, one of which bears the all-time priceless title, Tents of Arabs.  Four of the five sides were restorable (the lovely Neil Moret song Peggy was trashed, unfortunately), and, faced for a second time with turning vertical into lateral, I tried a different approach.  Last time (Ja Da, New Orleans Jazz Band), I used MAGIX's "move centered sounds" feature, but with these, I set the stereo separation as wide as possible, and then I saved the results.  Next, I chose a side (left, I think) and doubled it, then saved.  Result: lateral fidelity.  And with fewer weird background noises/artifacts.  I also used my wider (3.2 mil) stylus.  I suspect the best option would be a 4 mil (or larger) needle, but I only have so many styli.

My favorites among the Pathes are the lively Joseph Samuels numbers, the ditty by the Peerless Quartet (my favorite of the great early quartets, pressed a little off-center here), and Arthur Field's 1919 I Might Be Your Once in a While.  The latter number surprised me a lot in two respects: 1) Arthur Fields' lovely voice--I had thought of Arthur as a comedy refrain singer on dance band records--and 2) the superb tune.  I'd known the title, but I'd never heard the melody, and I assumed it was a trifle.  Nothing of the kind--it has a poignant text and superb music, and had I known Victor Herbert was the tunesmith, I'd have expected such excellence.  My repeat-play number of the month.

A word about Dardanella, which was a huge seller for (Ben) Selvin's Novelty Orch. in 1919.  Naturally, other orchestras and singers covered it, and this Joseph Samuels version is a close copy of Selvin's version.  Close enough, it could be deemed a fake hit.  A very early one.  Whether or not it functioned as a cheap knock-off, I can't say, as I don't know how Pathe and Victor compared, price-wise.

And we have two unusual 45s, starting with a private recording--the Waterford (Ohio) High School Wildcat Marching Band performing a medley that consists of Diana; Red River Rock; Hello, Dolly; Rock Around the Clock; Chattanooga Shoe Shine Boy; and Swinging (aka Swingin') Safari.  No way to guess a year from that line-up, and I was unable to find a discography for the Coronet Recording Company of Columbus, Ohio.  (Update: Bob says this was mastered by RCA Records custom division, with the "S" in S4KM designating 1965.)  I deleted the Fight Song portion, which includes the OSU fight song.  I figured this was wise, since, by now, OSU has probably copyrighted the word "song."  Anyway, the big disappointment here is too little time spent on Rock Around the Clock and too much on the please-make-it-stop Chattanooga Shoe Shine Boy.  At any rate, the former can register halfway well as a marching band number, but the latter is simply going to sound clunky in any large setting.  In my opinion.

The second 45, which I figured might not even play, but which cleaned up very nicely, is the 1953 country parody A Guitar Is a Man's Best Friend, written by the three Weidler brothers--George (second husband of Doris Day), Walter and Warner.  Prior to realizing this side is a lark, I honestly thought the singer was drunk.  This strikes me as specifically a send-up of Hank Williams, which, if so, would make this pretty bad timing, as Hank died earlier that year.

The two Kostelanetz sides from 1938 (ripped by me from my Brunswick 78s) are very entertaining, though they're not Kosty as most of us know him--not the EZ Andre.  Closer to a large dance band.  I thank my VinylStudio software for providing a perfect response curve for this 78.

The Coronet company has issued a lot of records, several are listed here:

I notice a "Tuba Solos" album which, I think, would be of some interest?
The Waterford HS single was mastered in 1965 by RCA Records custom division (first letter S=1965)

I was in high school in 1965, and I think if my school's marching band had strutted out to "Chattanooga Shoe Shine Boy" I might have thought it quite bizarre. I wouldn't have liked "Hello Dolly" but would have understood it.

I agree that the medley is odd for 1965. Not so much for, say, 1975, but.... I just wish they'd spent more time on RATC and not the other, less interesting piece. RATC rocks in spite of itself, whereas the other number doesn't cut it in band form.

I was thinking of putting up more early Kosty. I think I will do so. I'll have to dig out the sides. No order to my 78s....

Tell me more about how you did those vertical cut records. For some reason I recall reading about a way to play those by rewiring your stereo cartridge to register to up and down motion instead of the side to side motion. I understand that you did it all in software, which is probably how I would do it, but I wonder if the rewire job would remove the chance of digital artifacts? Hmmm, I need to think about this...

Rewiring the cartridge would probably yield better results, but I don't want to go to those lengths in this case. (-: Quite a while back, I rewired a cartridge for mono but got a lot of hum. I would have had to solder a ground wire, and that's past my limited tech ability. Seems unwieldy, too. But, back to topic, stylus size is a lot of it, too, I'm guessing. I'd guesstimate a 4 mil needle would be best. Needle size is always 90 percent of the solution, and my 2.7 mil needle is definitely too small--swishing sound, lack of detail, which are sure signs of insufficient groove contact. (Hey, I like that phrase!) At any rate, all I did was max the stereo separation. Made it as wide as possible, then put the left channel in both. Kind of like summing the same channel. Results were acceptable, I think, though a wider stylus would improve them a lot, I'm guessing.