Return of "Oh, Happy Day," plus two other duds and a good Mimi Martel performance 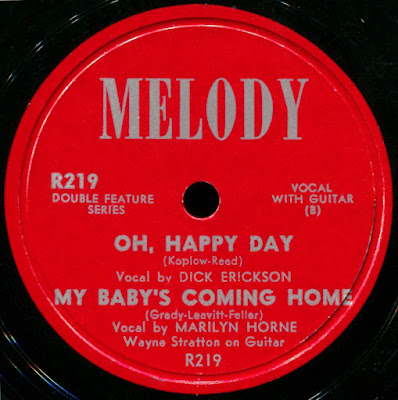 The 1952 Don Howard Koplow hit Oh, Happy Day isn't much of a song (or performance), but its importance to rock and roll is huge--it was one of the first r&r records to hit the pop charts, and hit it big.  It was not remotely the first I/vi/ii/V song to become a hit--I Got Rhythm used that cliche progression, for instance, though Gershwin employed a circle-of-fourths bridge in his undeniably superior song.  Blue Moon is another famous I/vi/ii/V song (or maybe it was I/vi/IV/V, which has the identical effect).  Harmonically, not much of a distinction.  Anyway, this disc may (or may not) complete the fake-hit list for this song--unless it turns out that Bell Records put out a version.

Before I forget, in January I posted Larry Hooper's 1953 version (by far, the best cover), plus Koplow's original (as "Don Howard") and three fakes.  If you missed this, get it here.  The link has been revived.

What can I say about this particular Oh, Happy Day?  Well, it would have worked a lot better with a rhythm guitarist capable of counting in steady 4/4. And if Dick Erickson hadn't managed to sound worse than Koplow (in spots, he seems to be channeling Lurch).  Curious about how this was notated for sheet music, I checked eBay (great research tool) for a scan of the music, and I found one.  As I suspected, the song was notated in 4/4, but with a time signature indicating cut time, or alla breve (C with a line through it).  In other words, 2/2, which is a two-beat pulse.  This is slow 4/4, and only someone dozing off would take it to be 2/2.  I don't know why pop sheet music of former days used the cut time symbol, when all they had to do was use a C with no line for 4/4.  Not that it matters much, but it just puzzles me.  And when I'm puzzled, I... I'm puzzled.  Yes.  You heard it here. Actually, I was wrong--cut time is traditionally notated as 4/4, with one beat per half note (i.e., two beats per measure of four quarter notes).  I read a Wikipedia piece on alla breve to refresh my memory, but I saw "half note" and thought eighth note.  I'm always doing that.  But I do hear a 4/4 in the background strumming on this.  Others may hear a 1-and, 2-and thing going on, a la traditional country music.  It's how our ears pick up the meter--it's subjective.

Back to the music, we get a less than terrific version of the Les Paul/Mary Ford My Baby's Coming Home, featuring a Marilyn Horne who is very clearly not the famous opera singer.  This Marilyn might have sounded better in a higher key, and her attempt to imitate Mary's whisper-style vocal on the original has her sounding like someone afraid to be heard (Les Paul-style echo would have helped).  The backing musicians sound confused.   Thank goodness for the excellent Mimi Martel, who does her usual great job on the Joni James hit Why Don't You Believe Me, even with the low-rent orchestral background.  We have to remember that these things weren't churned out with loving care, so when anyone managed to shine, it was quite a tribute to that person.

Corky Carpenter and the Texas Play Boys almost make it through the weird-metered Don't Let the Stars..., but they lose the chords in the solo section, which is actually kind of fun to listen to.  Tops wasn't big on second takes, obviously.

A fun EP, despite its faults.  The awful first track is a happy day for my collection--at last, I (maybe) have all the fake versions of OHD.  I won't complain, though, if I stumble onto another.

The real Marilyn Horne making cheapie covers was too much to ask for, I guess.

Marilyn Horne did, in fact, do covers when she was a young singer in LA. She did a version of Wheel of Fortune and was on the original theme song for the TV show I Married Joan.

That's amazing. I didn't know that. Thanks!