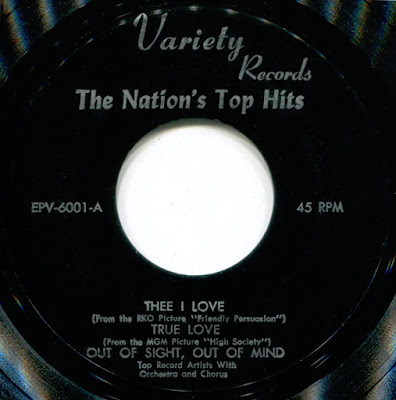 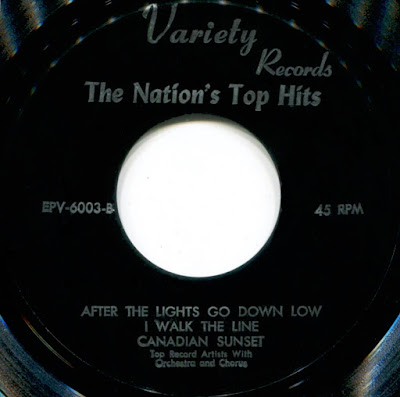 For some reason, I'm always thinking that Variety was a sub-label of Broadway--and then I remember that it wasn't.  Discogs isn't much help.  "Profile: US label," it says.  Um, yeah.  We know.

My more-likely-to-be-true guess would be that Variety's releases correspond to Allegro, Ultraphonic, and other Eli Oberstein labels, except that my Allegro Tops in Pops version of I Walk the Line is not the dreadful one here.  So... there's that problem.  And this dreadful cover of I Walk the Line is actually the reason I bought this set (no sleeve or box, though it probably had one or the other originally).  My only other copy is on a cracked disc from the Variety country and western series.  Split or not split, this is one cracked track.

Because it's so awful, and because I love it so much, I'm giving it its own download in addition to its appearance in the set (EPV-6003, side B).  I Walk the Line's terribleness and inept production values hardly prepare us for the rest of the tracks, which range from adequate to very good.  It's really something to contrast the bigger and/or more sophisticated arrangements here--Canadian Sunset, Lay Down Your Arms, Thee Love, Two Different Worlds, and After the Lights Go Down Low--with the minus production values of Walk.  It only goes to prove you never know what you're going to encounter in the grooves of these cheapies.  Sometimes, maybe, you don't want to know.

The playlist starts out with a very nice fake of the lovely Dimitri Tiomkin number from Friendly Persuasion (Thee I Love), a hit for Pat Boone, of course.  I've never been crazy about True Love, but this is a nice enough cover, and Out of Sight, Out of Mind is also okay, though Variety's unidentified group makes everything sound more like the Platters than the Five Keys.  Love Me Tender is kind of an odd fake--it's not bad, but it doesn't sound very Elvis, and the singer sounds ill at ease, especially when he takes a highly audible breath at the end.  "Whew.  Finally got it down," he seems to be conveying.

The Green Door is very good, with an R&B edge not on the Jim Lowe original.  (Best-ever version of Door, in my opinion, was in 1964 by Bill Haley, but unfortunately that terrific effort went nowhere.)  Even with my high tolerance for non-rock pop of the 1950s, Lay Down Your Arms is about all I can take.  It's stupid, really.  And I've never been a fan of the next number, Just Walking in the Rain, and this singer is no Johnny Ray.  The Bus Stop Song (A Paper of Pins) is a middling Four Lads effort, with these fake Four Lads doing an okay imitation of the real guys.

Hate to annoy any Patience and Prudence fans, but Tonight You Belong to Me, while not as stupid as Lay Down Your Arms, is pretty annoying.  Ditto for the original.  Don't Be Cruel and After the Lights Go Down Low are decent budget covers of, respectively, Elvis Presley and Al Hibbler, and Two Different Worlds was a hit for Don Rondo--I think I actually like this singer better.  The rest of the tracks are solid "fake" efforts.

The discs are not in "beater" condition, which is often the case for Variety platters, but there are distorted spots, the product of either cheap pressings or a stylus in need of replacement.  But nothing extreme, and this is Variety, after all.  An American label.  The performers are all part of a huge outfit called "Top Record Artists with Orchestra and Chorus."  I think I saw them on an Ed Sullivan Show rerun.  It was the budget fake version of the hit program, with a guy who looked sort of like Ed.  Ned Sullenman or Sellavan, I think they called him.

DOWNLOAD:  The Nation's Top Hits  I Walk the Line

Thee I Love (From "Friendly Persuasion")
True Love (From "High Society")
Out of Sight, Out of Mind
Love Me Tender
It Isn't Right
The Green Door
Lay Down Your Arms
Just Walking in the Rain
The Bus Stop Song (A Paper of Pins)
Two Different Worlds
Cindy, Oh Cindy
Blueberry Hill
You Don't Know Me
Tonight You Belong to Me
Don't Be Cruel
After the Lights Go Down Low
I Walk the Line
Canadian Sunset

Posted by Lee Hartsfeld at 8:56 AM

"Tonight You Belong to Me" is the last record I can remember buying new as a 78 - I was seven and plucked it from a remainder bin.

There was a superior version of "Two Different Worlds" by Dick Haymes on Capitol.

The irony of Pat Boone is that while he made his name as a R&B cover artist, he was actually a Crosby-style crooner. "Thee I Love" is a good example.

I suspect Cole Porter wrote "True Love" in a simplistic fashion so that Grace Kelly could handle it in her duet with Bing. I've always liked the song. I listened to the wonderful "High Society" soundtrack yesterday.

Thanks for these cover versions! I am surprised they couldn't get anyone to do a decent version of "I Walk the Line."

Thanks, Bob. I've seen the first page before, but I'm not 100 percent sure it's the same Variety label. When I have time, I'll have to do track comparison, as I think there are common titles between my Holywood "Rock N' Roll" LP (I think they put the apostrophe after the n--of course, it should come before AND after), so if they gel, we've found a match. But of course budget tracks--especially the sound-alikes--migrated all over the place!

Just listened to I Walk the Line. Two minutes of my life I'll never get back! It's like watching a train wreck. I can't un-hear it! And that inept guitar work will haunt me for weeks, I fear. Hilarious. Thank you
Gary

My pleasure. Once heard, never forgotten. It has no equal in the fake-hits field. None!