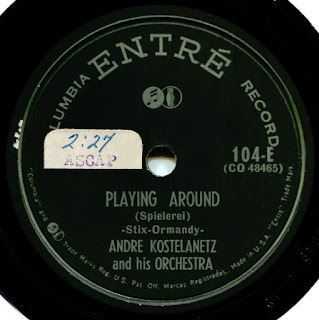 Well, "Kostelanetz-athon" is less awkward than "Kosty-athon," at least.  I think.  It's just a blog post, so no biggie...  Anyway, Buster mentioned looking forward to hearing the 1938 Kostelanetz sides in my previous post, and I thought, "Hey, early Kosty!"  Those were my brain's exact words.  These are all Kostys I featured in a 2017 post, but I was new to VinylStudio at the time--in fact, I may even have been manually manipulating the response curve at that point (prior to realizing there was no need to do it that way)--so it's time for new rips, now that I'm way better at matching response curve to 78.  Plus, the 2017 link expired way back.

Things start in 1934 with the two-part Revenge with Music, followed by 1935's Chant of the Weed and Rumba Fantasy.  Then on to the Brunswick Turkey in the Straw and Bugle Call Rag.  These 1934-1938 sides are fabulous recordings which, like the 78 I featured last post, will not remind you of the classic Kosty sound.  That's because the classic Kosty sound had yet to evolve.  At some point, someone (maybe Andre himself) said, "I've got it --Let's place the mic a room's length away from the orchestra," and the standard EZ sound was born.  Now, about Chant of the Weed--everyone in the world except me thinks it's about marijuana, because, following Woodstock, the word "weed" is only allowed to mean reefer.  It's some kind of unwritten rule.  Those troublesome things in your yard, crowding out the "good" plants?  No name for those.  They're simply things.  To get rid of them, you can buy a spray bottle of Thing Killer from Lowes.  Anyway, I regard Chant as a return-to-Africa song.  There was a literary movement around that idea--African-Americans returning to their true land.  It wasn't D.W. Griffith's idea--it was a notion born in black culture.  It seems odd today, but lots of outdated things and ideas seem odd today.  I hear nothing in the lyrics which suggests Mary Jane--the words are all about coming home.  Specially, being called home--by the weeds.  Think jungle.  Not every song of old is filled with double meanings.  Some lyrics simply mean what they mean.  The weird-sounding chords in Chant are simply whole-tone constructions descending in half-steps.  A staple of horror movies.  They do sound incredibly neat as presented by AK's superb vocal chorus.

I used the dynamic filter on MAGIX for, I think, the first time, and mainly to bring out the very quiet portions of Weed, since the volume on the vocals really dips.  The results were acceptable, so I kept them.  I also used this filter for Arthur Honegger's Pacific 231, a playlist bonus from 1927 in which I could swear some limiting was being used.  Which is to say, engineers of that day appear to have had some kind of primitive, basic audio limiting.  Specifically, the volume is cut back in loud sections (subtle, but listen for it), and in such a way that suggests multiple microphones.  I think audio technology was more advanced, even in 1927, then we might imagine today.

And we have nine V Disc Kosty sides covering the years 1944 to 1947, and the wafer-thin V Discs are highly prone to warping, which means I had to cut out some thumps and do some selective de-rumbling.  You haven't lived until you've done selective de-rumbling.  My favorite of the V Discs is the Cyril Scott Lotus Land, which I would call the starting point of so-called Exotica, if it weren't for Debussy, Satie, and others beating Scott to the game by a couple decades.  Oh, well.  The Kosty version is perfect, just beautiful and in no hurry to reach the run-off groove--even the very audible studio noises (Coughing?  Page shuffling?) fail to mess up the mood of mysterioso, and I just coined a phrase--no "mood of mysterioso" in my Google search.  The Kosty composition Impressions of Basie (1944) is the usual Classical-musician-doing-orchestrated-blues-and-passing-it-off-as-jazz routine, but it's fun enough for what it is.  Problem is, such compositions were a dime a dozen.

I mentioned the one bonus side--the other is Gustav Holst conducting his own Marching Song and Mercury from The Planets, all in wonderful 1926 fidelity.  Like a lot of composers, when conducting his own stuff, Holst goes by the clock--precisely as written, no tampering with tempo.  I think I've heard one entire Planets version that didn't make me wince at every tempo and dynamic decision--worst is those egoist conductors who do the initial Mars crescendo at 15X forte, apparently for listeners deafened by Star Wars soundtracks.  Yeah, we get it--it's a crescendo.  If there's any life on Mars, it heard it, too.  But I'm way off topic here.

On YouTube, some arranger purports to have improved on Holst's scoring of Marching Song, and if there's one thing Holst needs help with, it's scoring.  (Long sigh.)

Oh, and I included the "raw" file of Marching Song as the last track.  It's what it sounded like before I did anything to it.

Posted by Lee Hartsfeld at 9:17 AM

Great! Many thanks for all your efforts.

Wonderful! Thank you very much. And, as usual, reading your comments is a delight!
Gary

I didn't realize Kostelanetz went back this far. I sort of imagine him springing to life, fully formed, sometime in the mid-50s. :)

Most enjoyable set; every piece has something to admire, with the possible exception of the Warsaw Concerto.

Thanks for the nice words, and glad to have my essay appreciated--I sometimes worry I go on too long. And, yes, the mood/easy listening of the early hi-fi era does seem like it popped up overnight, but I think marketing had a lot to do with it--all of those covers showing pretty ladies in nightgowns next to the hi-fit set, all the corny "Music for..." titles, the whole "mood music" notion. Meanwhile, much of the music--the Kosty stuff, anyway--on these 50s LPs went back the early 1940s. They were reissued 78 sets, only the labels didn't say that. Kosty's "Musical Comedy Favorites" was originally two 10" 78 rpm sets from 1941 or 1942, and his wonderful recording of "Grand Canyon Suite" dates from 1941, and I believe it was one of the first recordings of the expanded score. (Grofe first scored it for Whiteman's concert orchestra, then revised it--twice, I think.) Marketing is the enemy of pop music scholarship, sort of! My fascination with mood/EZ music started the moment I figured out it went back so far. Its evolution is hard to pin down, because if we think of it as mood-setting music, then we have to include silent film backgrounds, Muzak (which actually began around the 1910s!), and probably the various "Pops"-type pieces that date back to the 1880s or earlier. I gave up trying to trace its evolution, because it's just too complicated. I find it delightfully ironic that a form so critically marginalized has such a rich history! My approach is to treat all EZ and mood as a kind of sub-genre of light concert music, and I leave it at that.

Buster, thanks! Re "Warsaw," is that because it's been played to death, or because this is one of the less inspired recordings? For me, it's the latter. I love "Warsaw" when it's done well, even if it's a fake Hollywood concerto--a hack work, essentially. I think it's brilliantly written, despite its incredibly derivative nature, and the climax gives me goosebumps--when done right, that is. It pushes all the right emotional buttons, but there's an emptiness to it, a by-the-numbers character that marks it as movie background. Someone on line described it as patched together, and he's right, but I find it hard not to like.

Lee - I love the concerto, but this arrangement left me cold. Richard Addinsell's film music in general is worth hearing. I don't think he usually did his own orchestrations, though. The original Warsaw scoring was by Roy Douglas, and it contributes greatly to the effect. I saw the film for which it was written (called "Dangerous Moonlight" in the UK and "Suicide Squadron" in the US) many years ago and the music works well in this wartime drama. I would imagine that these days it's on YouTube.

Nicholas Brodzsky and, of course, Bernard Herrmann did fabulous concert-style movie pieces, too. You know that, of course. "Way to the Stars" ("Johnny in the Clouds") was one of the first examples of exceptional movie music that I heard on disc--on an HMV 78 ( I bought while stationed in Scotland!--and I remember thinking, "Hey, this is good stuff." And I never heard Herrmann's extraordinary concerto for "Hangover Square" until I bought the old RCA Camden recording of same. Records have been my main introduction to great movie scores, oddly enough! Not so with TV soundtracks--my ears were glued to the better 1960s TV soundtracks--the great music for The Outer Limits, Dark Shadows, The Invaders, Wild Wild West. I honestly though of myself as weird for being so hooked on the music--there was no internet available, so I didn't know I was a common type. I'm in autobiographical mode today--sorry!

Oh, and your knowledge of this stuff amazes me. You know your subject!

Oh, yes, I love movie music in general, and Herrmann in particular. I haven't had his music on the blog only because it's in general circulation.

I remember hearing the North by Northwest music for the first time many years ago and being entranced. I still am by it, although with more experience, I hear everything from Elgar to Prokofiev in it. He seemed to love English and Russian music in particular.

Thanks for the compliment - as you know, I love reading your remarks on music. Always enlightening and amusing.

By the way, my favorite quasi-concerto is Charles Williams' "The Dream of Olwen" from the film "While I Live." What a beautiful piece!

I like "quasi-concerto." I always call them "fake" concertos. Lovingly, of course. I also love the condensed concertos commissioned by Paul Whiteman--I think of "Rhapsody in Blue" as an example. It strikes me as more concerto than anything else. And there was a lovely Domenico Savino piece--the name of which I can't remember--which is the ultimate mini-concerto. Savino had incredible formal skills, and I can't understand why he's been forgotten. I guess he was one of those mostly behind-the-scenes folks who never get their due. I believe Grofe was one of the first behind-the-scenes musicians to insist on shining the light on himself. And apparently Whiteman never forgave him and used his influence to mess over Ferde's career. That's been well documented, including by Ferde himself. It's always painful to discover that someone you admire was a vicious jerk in real life. But Whiteman was an alcoholic, and they're Jekyll-and-Hyde sorts, usually.

What a treat! Thanks for the Kostelanetz!

Ronnie--You're welcome! I love sharing out Andre's early stuff, simply because it's so awesome.