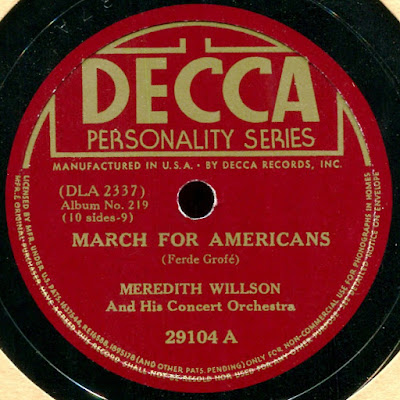 Save for the mournful anti-war classic The Trumpeter (J. Francis Burton-J. Airlie Dix, 1904), which I present often at this blog (this is my latest and best rip), these tracks are kind of a happy affair.  Or a happy-sounding affair, anyway.  Jaunty, cheery stuff--who knew Gettysburg was such a blast?  (No pun intended.)  But happy-sounding marches about war are part of pop music history, so what can I say?  And Ferde Grofe's March for Americans is a straight-out patriotic salute, so its cheery tone is completely appropriate.  I like it more every time I hear it--Meredith (The Music Man) Willson and his concert orchestra do great work on this 1941 12-incher, part of a Decca set called Modern American Music.  Ja Da and Good Bye, Dolly Gray were big WWI pop numbers, though the latter was a Boer War number.  In fact, says Wikipedia, "The song was popularized as a Boer War anthem, it was written during the earlier Spanish-American War."  I think they left out a "though" at the start of that sentence.  Ja Da is from a vertically cut 78 on Okeh by the New Orleans Jazz Band, whose pianist was Jimmy Durante.  He eventually took over the group. 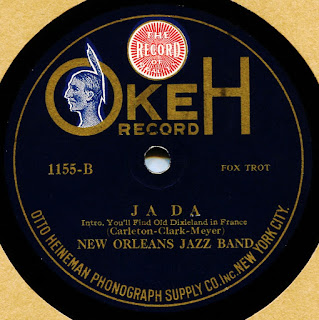 Vertically cut 78s are a challenge, because summing the channels eliminates the vertical aspect, and the result is... no sound!  With MAGIX, it takes a two-step process--first, I move the "centered sounds" to the right or left, then I save the results.  Then I place the saved channel on both sides.  Rumble is an issue with non-lateral-cut 78s, since I can't eliminate it by summing the channels, but there is a great DeRumbler filter in the program, which I only now discovered can be used by itself, without having to take a noise sample first.  Very handy.  This way, I can knock out the rumble on the verticals, leaving me free to give acoustics some bass.

Bugle Call Rag is a jazzy kind of parody--"jazzy" in the 1923 sense, which can sound sort of corny to modern ears, but it's gold to fans of "hot" dance music.  Battle of the Nations is a 1915 E.T. Paull march--WWI before my country became involved.  Paull's marches and novelty pieces, many composed by him, were catchy but no classics.  Their covers, on the other hand, were often extraordinary.  I just swiped this image from the Smithsonian Institution's website.  I probably have it in my collection, but finding it would take forever: 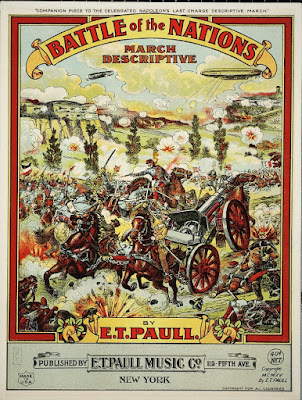 All selections ripped by me from my shellac collection.  Have a great 78 rpm Vets Day!  And, on the file, I goofed on the American Army March credit--I typed "Iasselli" instead of "Iassilli."  In case you notice.

Posted by Lee Hartsfeld at 4:08 PM

Thanks as always Lee and Happy Veterans Day, love and prayin' for ya!

I wish I'd come across this earlier in the day, but I'll make it the soundtrack of the last few hours of VD2019. Much appreciated.

Thanks for your service Lee!

I'm a day late to the game, but this looks like a great list. Thanks for the music, and thank you for your service!!