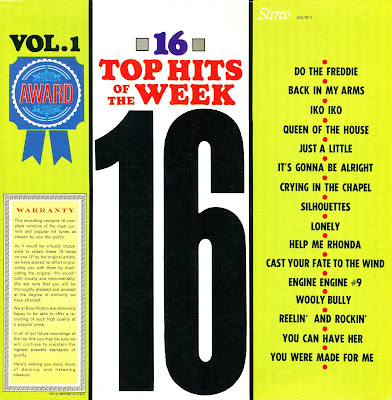 I just can't stop myself.  More fakes, this time from 1965, it would appear.  I'm surprised to see Premier as the label, for reasons I'll go into momentarily.  Premier, as record collectors know, was part of the Coronet/Parade/Spin-o-Rama, etc. group.  And this is where I have to warn people about the label info on Discogs, a site I love and use a lot but which gets label info wrong some of the time.  For instance, this LP, which says "Premier Albums, Inc." on the label and jacket, and which gives a New York NY address, is identified at Discogs as a Brazilian label.  A simple linking error, maybe, but Discogs gets the info wrong on other cheapo labels, too, so---be careful.

The reason I'm surprised the see these on Premier is that many of these versions also showed up on various Pickwick labels, and on the Hit Parader and Song Hits labels sold through Charlton comics (and, presumably, also through the Hit Parader and Song Hits magazines the labels were named after).  I'm always talking about how these fake-hit tracks label-hopped, and we're seeing label-hopping in action here.  It pretty much makes tracking down the source of a track an exercise in futility.  I'm almost positive that, by this point in the fake-hits game, a couple outfits were supplying the masters.  Great way to save time and money.  And to sell the same tracks umpteen times.

These fakes resonate with me, because I was (let me see) eight in 1965, and so I remember most of the original numbers.  Logically, I should remember all of them, having listened to Top 40 radio, but back then a lot of what we got to hear, hit-wise, depended on the specific market.  I do not, for example, remember Queen of the House, the feminine take on King of the Road.  As for Cast Your Fate to the Wind, if I heard it, I'm sure I tuned it out.  The Beach Boys' Help Me Rhonda was, and remains, one of my favorite singles ever, and I even like this dreadful cover.  Other numbers fare better--Do the Freddie, You Were Made for Me (my favorite Freddie and the Dreamers track), Wooly Bully, It's Gonna Be Alright, and Reelin' and Rockin' (a copy of the Dave Clark Five's version of the Chuck Berry number).  The sound quality is halfway acceptable, especially considering the label group, though the pressing is atrocious.  I did very careful editing to mask the hiss at the fade-outs and at the track starts.  Most of the stereo is genuine, save for You Can Have Her, which sounds like manipulated mono, and Silhouettes, which is also mono but painfully out of phase (it's an effect calling "flanging," which I did not know).

Iko Iko took me a few listens to remember--once I made the Dixie Cups connection, it came right back to me.  It got tons of play back then, but my first response was, "What it this??"

Crying in the Chapel has a singer badly imitating 1965 Elvis, while the backing track copies the one used on the 1963 Little Richard version.  I'll give that a few seconds to sink in.  I haven't had the chance to sound-compare, but I'm almost sure this backing track was also used by Synthetic Plastics Co. when it covered the Little Richard Chapel (an oddity, since LR's version wasn't a national hit).  So we get the LR arrangement and a bad Elvis imitation.  Can you see now why I love these things?

To quote from the front jacket, "Here's wishing you many hours of dancing and listening pleasure."

You may not remember Cast Your Fate to the Wind because the Vince Guaraldi original was a hit in 1963, not 1965. (There was a cover version that charted in '65, which may be the impetus for this cheapie.) This was before Guaraldi did the Peanuts Christmas music.

More low dollar label greatness!!!!! Thank you!!!!
Flanging is the practice of taking 2 copies of the exact same track on 2 different tape machines running at the same time at the same speed and mixing the outputs together. Taking your finger or thumb and running lightly on the flange of the tape reel sends the 2 mixed signals out of phase, causing the wild pitch changes between the 2 tracks. Toni Fisher's 'The Big Hurt' is the earliest popular song I remember with the technique. I have read that it was experimented with earlier in the 50's.