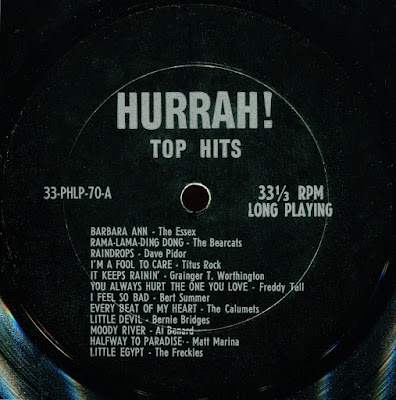 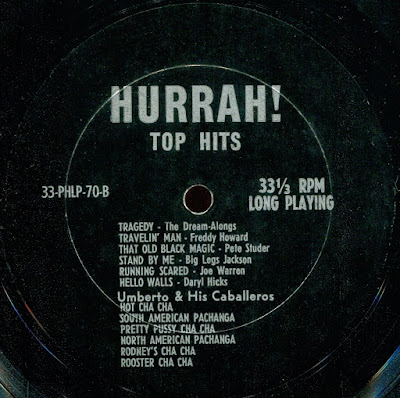 Big Legs Jackson, The Freckles, Titus Rock, and Grainger T. Worthington.  What does that sentence tell you?  That I believe in using the Oxford comma.  What else?

So, somehow the Hurrah! (Pickwick group) label managed to cram 24 tracks onto this LP.  And without editing things down.  The sound restoration challenge was steep, as this thing is coated in little cross-cuts, and I'm still not sure why I spent the six or so hours necessary to make it sound good.  But, seeing as how I did spend that time, I may as well present it.  Apparently having run short on fake hits, the Hurrah! label appended six utterly unrelated (but pretty cool) numbers by "Umberto and His Caballeros."  I find them very enjoyable.  There are two or three jumps in that portion of the disc, but I left them in (while smoothing them out), too popped at that point to consider switching needles (and adding weight) or substituting my 1.2 mil mono needle, as I did to get through the skip in the Side B Running Scared.  For that track, I edited in the corrected portion, which is just a fraction of a second, but if you listen really, really closely, you might hear things switch to mono for a tiny moment.  Boy, these methods are hard to describe.  Even harder to do right.

Like I said, this required an incredible amount of work, since the clicks and pops never stop.  (That almost sounds like a jingle.)  I first ripped this on VinylStudio, that great (but bug-ridden) software with the amazing declicking filter, then I migrated the tracks to MAGIX, where I took out the really loud pops, of which many still remained.  VinylStudio only declicks so far--not enough to harm the music.  So I had plenty to do by hand, using MAGIX's (quote) "Draw wave shape" tool, which allows me to fill in the sound spikes that go with clicks and pops, thus smoothing them out--and, hopefully, silencing the noise.  I used other tricks.  Somehow, I got this to a solid B- from a D/D-.  And, as I type this, gas prices are declining in the U.S.  Coincidence??

It's cause and effect, I tell you.

1961 tracks.  According to rock historians, only .02 percent of whom can describe the ascending and descending versions of the melodic minor scale but who nevertheless act like they know everything, the years between Elvis and the Beatles aren't worth considering.  Sorry about that, Carole King.  Sorry about that, Marcels.  And so on.  Actually, a lot of cool stuff happened between the time Elvis was made "mainstream" (what was he while riding the pop charts--an outsider??) and the moment the Far Four invaded us.  And we get to hear fake versions of some of that cool stuff, and not bad fake versions, either.  Best of all, the tracks are in stereo.  I guess that's the reason I went to all this trouble.  Because, as best as I can tell, this LP is not common--I have no idea what the jacket looked like, and so far all I've found on line are listings for the 45 and 78 rpm versions of the Hurrah! label's Top Hits series.  And those weren't in stereo.  If I anticipated ever turning this one up again, I wouldn't have put this much time into it, but I did, and it's done.

Since I've blabbed enough already, I won't go into who the original artists were on the original hits--that info is easily found.  As for the "Umberto and His Caballeros" tracks, which include Rooster Cha Cha, and Pretty Pussy Cha Cha, your guess is as useless as mine.  Umberto gets five entire Google matches, so his life story remains a mystery.

With Grainger T. Worthington, the Freckles, Big Legs Jackson, and the Dream-Alongs.

Annnnnnd... I just discovered that this also came out, LP-wise, as America's Favorite Music on Top Hit Tunes 33-PHLP-70 (same number as this!), which must mean Pickwick had absorbed Waldorf Music Hall by 1961.  Now watch me find a mint copy of that version, after having slaved over this.  (But something tells me that LP doesn't pop up a lot, either.)

Umberto and His Caballeros

Thanks. I knew these had appeared on Bravo EPs--I have them, I think--but checked Kane at Discogs and found no listing. I wonder if there was a Kane LP of these, too, and if it was in stereo. The big deal here is the stereo. And the Top Hit Tunes single confirms that Pickwick had acquired Waldorf. They probably kept some back catalog stuff to confuse the issue.

I must say that these are some of the better Fake Hits heard with my tin ears......not bad at all!!!! I didn't listen at 'Eleven' as the kids are out of school (they are 19 and 16 and listen to an abundance of obscure music so I'm not sure why I would care) but the cleanup sure sounds good!!!!

Thanks! I worked like a demon on the surface noise. Glad you enjoyed. Yes, these are unusually good, by fake-hit standards. Pickwick was taking over the fake market about this time, and maybe it cared more about quality than its predecessors. (Though of course Waldorf, under Enoch Light, always put out technically good stuff.)

Tracing the history of these things--who owned what and when--is made next to impossible by the way new owners, like Pickwick, retained label names and tracks, re-reissuing things. That this very same LP came out on a former Waldorf label (with a standard Waldorf cover pic) almost seems like a move designed to stump future collectors. But I doubt anyone knew there would be collectors seeking this stuff 50 years later!

I sure hope Big Legs Jackson appreciates what you are doing to secure his legacy.

Me, too! I'd do an entire Jackson post, except there's only the one track....

Well, if that isn't the ugliest LP label I've ever seen, I'm sure what is.