The weirdest budget label EP of all time. Or, "Ya had enough, cats?" 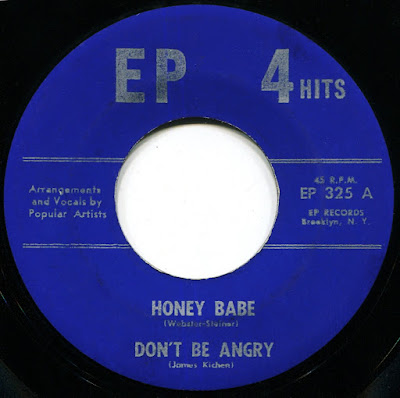 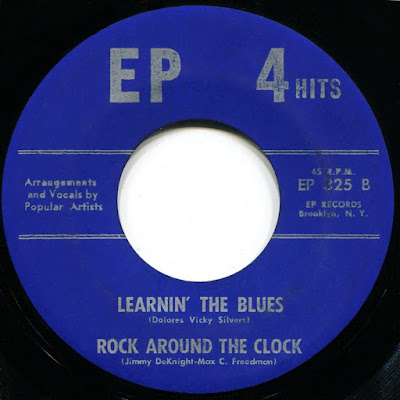 This is the weirdest budget label EP of all time.  Quite a big claim, I realize.  But it's me making it, and you know the kind of stuff I collect and post, and I don't proclaim something weird, bizarre, or flat-out odd without a good deal of cause.  I mean, I do not know what to make of this.  Sure, Discogs gives a nice, brief history of the label, which was imaginatively named EP Records.  (Maybe "EP Records with Grooves on Them" was already taken.)  But a reasonable person reads that capsule summary and reasonably concludes that EP Records was just another no-budget, save-on-ink-by-not-giving-performer-credit operation.  But what we encounter with this release is... something else.  And I don't mean "something else," as in, "The Monkees are really something else."  I mean, something indescribable.  Indescribably indescribable.  But I'll try.

Side A has Honey Babe and Don't Be Angry--two versions I've never heard before and which sound like they were recorded off of a TV broadcast with a hand-held microphone connected to a home disc-cutting machine.  Only it's even more bizarre--at the start of Honey Babe, a trumpet fanfare has been tacked on.  It was probably lifted from a sound-effects disc.  The extreme surface noise on both numbers was present on the source discs--this copy is pretty clean.  I left enough space after each number to demonstrate as much.  At first, I thought someone had played this with a sewing needle....

Side B starts in a normal enough fashion with Learnin' the Blues (the huge 1955 Frank Sinatra hit), and it's the same fake version credited to Jerry Rudolph on the Today's Records EP I recently featured, except this is unedited.  Fidelity is a sold C--.  Fine.  But then comes Rock Around the Clock, and all conventional theories go out the window.  "Go, man, go!  Eddie Randolph and His Sextet!" announces a fake DJ.  (Eddie Randolph and His Sextet?)  This is followed by what sounds like Bill Haley's original recording, only slightly sped up and with the treble almost completely clipped, and with two incredibly awkward edits before the fake DJ returns: "Cool Eddie Randole (sp.?)!  Ya had enough, cats?  Oh, you want some more.  Yesss?  Well, here it is!!"  More Bill Haley--the ending chorus.  Then: "Real gone, Eddie--but that's enough, man."  End of track.

A Bill Haley fake that's not a fake but actually a pirated recording of Haley, with some idiot telling us it's "Eddy Randolph (or Randole)"?  I mean, did I dream this?  No, the record's still here.  The screen is still up.  I'm fully awake.  My God, this is reality!  Or something filling in for it.

You can download the entire awful EP (first link), or you can subject yourself to only the Bill Haley--er, Eddie Randolph/Randole--side (second link).  A side which can only be described as "real gone."

What were they thinking when they produced this?  Anything?

DOWNLOAD RATC only:  Rock Around the Clock (EP Records 325)

Thanks Lee. Btw, info at Discogs is directly taken from my blog!

Bob--Awesome. Grateful for the background on this label. Do you know if their releases were typically this off the wall?

I think you nailed it sound-wize Lee, straight offa my grandma's table top AM radio! Well played, thanks, I guess. Well worth the bandwidth in any event.

jeepers. this one gave me pause. i’ve been studiously ignoring all these budget-label postings as they review a practice not much to my taste. i never could understand just who would buy in to the “four big hits for a fraction of the cost” approach to music appreciation. to me, hit versions were unique. imitations were lame at any price. but obviously, a whole lot of people didn’t agree with me.

after your description, i couldn’t ignore this one. [i guess the bill haley botch gets added to your list of pre-bagdasarian “sped-up” recordings.] the whole thing is jaw-dropping. the mentality behind the production is such that i suspect a child and a moronic, patronizing adult were involved… something along the lines of, “i bought a machine and junior thinks he can get some of that new-fangled noise the kids all listen to… my cousin joe is a record jobber and once we have the thing pressed he’ll add it to his line”. i mean, i can understand a thirteen year old thinking that all he needed to disguise a recording were a few voiceovers, scissors, and a roll of scotch tape (danny cedrone’s guitar break was really, real gone,man). and i can understand how that same kid might convince himself that no one in the record-buying public would notice that he lifted songs off a tv program. but didn’t any adult listen to this before it was pressed? maybe. but if so, it was probably an adult who had an “it all sounds alike” disdain for contemporary pop music.

This is why I'm eager to hear other releases by this label--there were quite a few, amazingly. I have one on order. If it should turn out that the other were typical fake-hit releases, then this thing becomes even more of a mystery.

You nailed the anti-r&r attitude possessed by many adults (including my dad). It was LCD pop, and the kids didn't know noise from music, and--best of all--"good" music was coming back. Any day now. Stan Freberg's "Old Payola Roll Blues" is the ultimate expression of that view--it even ends with a chorus singing about jazz, showtunes, and (I forgot what genre) coming to knock r&r off the charts once the kids wise up. When I was maybe 9 or 10, my dad told me the story of how a kid asked to use my dad's hi-fi to play his Elvis LP. On good equipment, the awfulness of the music was brought out (says my dad)--the horrible vocal, the out of tune bass--and the kid threw his record in the trash. Nothing made up about that story.

Anyway, if the other "EP 4 Hits" are anything like this, I want them all. It's a sickness on my part, I guess. And another classic anti-r&r bit, just the other day on a "Peter Gunn" rerun from 1960--Gavin MacLeod (still alive at 88!) played a record producer who committed murder to hide the fact that his big star was using a guitar with a speaker built into it. The audience was hearing a prerecording, not the performer. The kids will buy anything if it's hyped the right way, he explains to Gunn. In the final scene, after the kid discovers MacLeod murdered his girlfriend (to keep the secret device from becoming known publicly), he pulls the strings off his guitar, one by one. A symbol of a teen saying no to rock and roll.

A lost fact of pop music history is that many of r&r's detractors viewed the music as a continuation of the pop decay which began, in their view, with Mitch Miller. "Sparrow in the Tree Top" to "Heartbreak Hotel." And I'm one of the few pro-Mitch Boomers, in that I like his stuff and appreciate the fact that he actually defended r&r (one of the few industry insiders to do so, along with some old-time bandleaders like Paul Whiteman), despite his own dislike of it. He felt that kids had every right to their own music, noting that the main problem with r&r is that it made a virtue out of monotony (I'm paraphrasing). And, technically, that's true--it did. But the monotony was part of the fun. He even wanted to sign Elvis, but thought the asking price was too steep. So RCA got Presley. Critics of Mitch would say it's a good thing he didn't get Presley, because Ray Conniff would have been producing the singles, but I personally would have loved to hear Presley as arranged by Conniff.