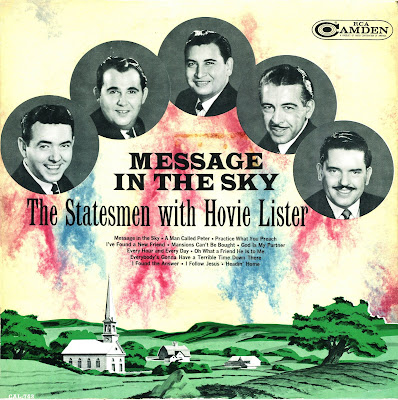 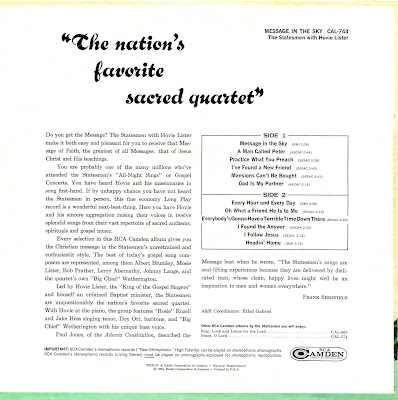 For our Sunday, a cool 1963 LP of Statesmen tracks covering the period 1955-1960.  The final track, 1955's Headin' Home, may be a slight shock to anyone who hasn't heard it before, like me.  Imagine a bluesy jazz trumpet backing the Statesmen.  Not something I ever expected to encounter!  It's like the Statesmen making an appearance on a '50s crime series or something.  Truly weird, but hey--more power to them for experimenting.

For maybe ten years, I've owned this vinyl without a cover.  Then I found the cover just a week or so ago while thrifting.  Turned out to contain a different RCA Camden LP, but I l already had the vinyl, so now I have the whole thing.  What can I say?  The usual terrific Statesmen harmonies, and a nice song selection.  I figured out the years through various sources, including Billboard for both 1955 selections,  my 78 rpm dating guide, 45cat, eBay, and the online online (78 rpm) discographical project.  Luckily, during the period these sides were made, RCA used the same label numbers for its 78s and 45s.

Too tired and rushed to say more, except to note that there was a small, hardened wad of something on the Side 1 label, which I used Goo Gone to remove.  After five or six hours, the Goo Gone is still not gone, so I wasn't able to scan the labels and add them to the zip file.  I don't know why Goo Gone takes so absurdly long to go.  But then the product only promises to get rid of goo, not to make a fast exit  By the morning, there should be no sign it was there.  I hope.

Hovie Lister and Jake Hess are two names I heard a lot of growing up in a Baptist household full of Gospel musicians. And I still love hearing their early efforts, the energy and pure talent is still amazing. Have to let my Mom the pianist listen to this one.

Thanks, Lee - as you know, I love the Statesmen (and Hovie, too).

Lee,
I believe I have this LP somewhere and haven't done all my research, but I wonder if the last cut was during their Nabisco years.

Speaking of albums somewhere, there's another reissue of more of their mid-50s material and I'd say their studio version of One Of These Mornings (I believe it's One) has the same big band orchestra backing them up! Oh and some of the 78s I mentioned in a previous comment, are on this album, the one you posted, that is. Love and prayin' for ya!