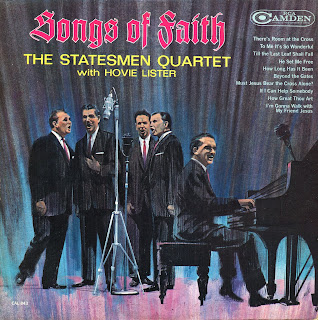 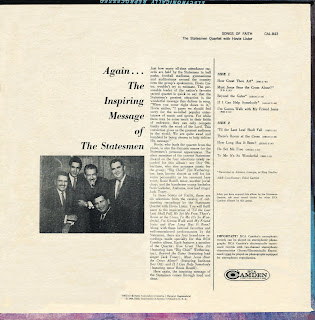 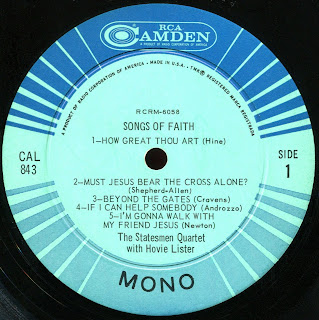 This is a last-minute substitution. I had the Statesmen's Peace, O Lord all ripped and scanned and ready to go--then I discovered that Sony Music Entertainment has it available as a digital download (with two bonus tracks).  Always check to see if your budget RCA Camden LP is available in digital form from Sony.  Just simple common sense.

Luckily, I found this one--Songs of Faith--last week, so here it is.  I didn't have a chance to give each track the good listen it deserves--I was in a rush and listening for clicks, pops, and other issues--but I can tell you that 1) the singing is of the usual superb quality, and 2) most tracks are slow in tempo, save for one medium tempo number and a delightful uptempo song from 1956 called I'm Gonna Walk with My Friend Jesus.  There are two moments of treble-range distortion on one of the tracks (don't ask me which--I don't remember) that don't appear to be related to surface issues, so either a microphone was acting up during the session, or something happened with the mastering.  It wasn't me!  I corrected the brief sections the best I could with EQ'ing.  You may not even notice them.  If not, forget I mentioned them.  (Distorted moments?  What distorted moments?)

Forget I mentioned it.  (Mentioned what?)  Exactly.

He Set Me Free, which appears on side 2, is a typo--it's actually He Sets Me Free, originally released as a single in 1959. I was relieved to discover this, since of course there's a hugely famous Albert E. Brumley song called He Set Me Free, and I couldn't picture another, later song using that title.  But you never know.

Posted by Lee Hartsfeld at 8:00 AM

The Statesmen are good, but when are you going to share some Blackwood Brothers? Now they're the cat's meow! :)

You know, I love both groups - but I REALLY love the Statemen. Great record.