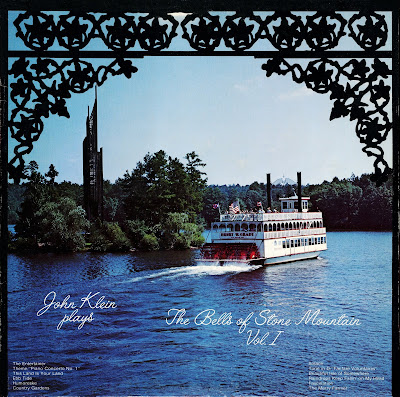 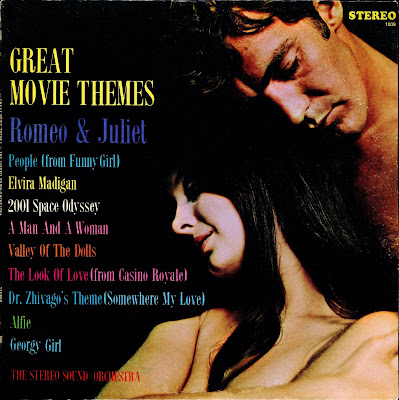 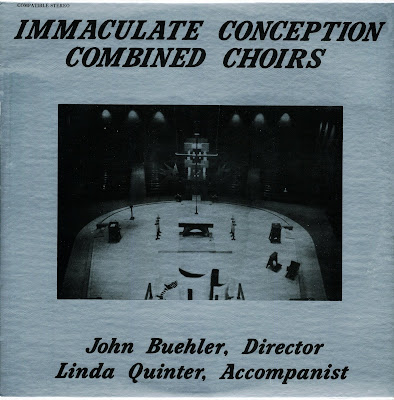 The perfect post for those who have longed to hear Raindrops Keep Falling on My Head performed by the Immaculate Conception Combined Choirs of Dayton OH (hope they were spared the terrible storm damage which just hit the city) and the world's largest electronic carillon--the Bells of Stone Mountain, in Georgia.  Look no further.  Your search is at last over.

Plus, three Burts apiece by singer Jerry Vale and guitarist Billy Strange, though not together, plus Vikki Carr's rendition of One Less Bell to Answer, an ungrammatical song title that wouldn't have worked with "fewer" substituted for "less."  Who's complaining?  Me?  Nah.  We also get some instrumentals and semi-instrumentals (semi-instrumentals?) in addition to Billy Strange and the John Klein carillon track--April Fools by the Longines Symphonette Society, The Look of Love by the budget-label Stereo Sound Orchestra and Strings, The Green Grass Starts to Grow by the great Percy Faith, and Bond Street (from 1967's Casino Royale) by Columbia Record Club easy-listening mainstay Terry Baxter.

I'm not sure what I think of Steve Lawrence's What's New Pussycat? which he recorded with the ? at the end, something many artists don't do.  I'm tempted to call the arrangement pretentious, but Steve can make just about anything work, so I'll give his version a B+.  There's worse--much worse.  Such as George Chakiris' rendition, which I may not be able to bring myself to post.  When Roger Williams recorded Lost Horizon in 1973, the movie didn't yet have "disaster" written all over it (and it's not even a disaster flick--at least, not technically), so it was just the usual get-the-Burt-songs-out-there kind of optimism going.  Whatever I just typed.  Anyway, I forgot to include it in my list of instrumentals, so I'm doing so now.  Sorry, Roger--the omission was not intentional.

Not sure what I think of Al Martino's I'm a Better Man, which certainly doesn't compare to Engelbert Humperdinck's fabulous version, but I can't be comparing everything to the best.  It's just that, when you have an A+ recording of something, everything else seems... less than A+.  Ever notice that?

The late Jerry Vale had a genuinely good voice, but what is that quality that's so annoying?  Was it a sing-through-the-nose kind of thing or was it an issue of vibrato?  I find Jerry pleasing and annoying at the same time, which gives him a unique spot in my opinion of singers.  Sue Raney is fabulous, and she could've doubled for Britney Spears, had 1) Sue been born in 1981 or 2) Britney been born in 1940.  Doubled physically, I mean--I see a very similar face and face structure.  Britney wouldn't have had Sue's vocal chops in any era....

To the Burt!  Let me know if there are any playlist errors--I did some last-minute juggling and hopefully did it without a hitch, but you never know.

All by Bacharach-David unless otherwise noted

April Fools--The Longines Symphonette Society, 1974
Raindrops Keep Fallin' on My Head--John Klein, the Bells of Stone Mountain
Any Day Now--Tom Jones, 1967
The World Is a Circle--The Sandpipers w. the Mitchell Singing Boys, 1972
The Look of Love--The Stereo Sound Orchestra and Strings (Premier 1009)
Raindrops Keep Falling on My Head--Immaculate Conception Combined Choirs
What the World Needs Now Is Love--Billy Strange, His Guitar and Orch., 1965
What's New Pussycat?--Steve Lawrence, 1965
Trains and Boats and Planes--Billy Strange, His Guitar and Orch., 1965
Odds and Ends--Lenny Dee, Prod. by Owen Bradley, 1969
(There's) Always Something There to Remind Me--Sue Raney, Arr. by Eddie Karam, 1966
What's New Pussycat--Billy Strange, His Guitar and Orch., 1965
This Guy's in Love with You--Jerry Vale, Arr. and Cond. by Jimmy Wisner, 1968
The Man Who Shot Liberty Valance--Sunset Strings, 1970
The Green Grass Starts to Grow--Percy Faith, His Orch. and Chorus, 1971
Do You Know the Way to San Jose--Jerry Vale, Arr. and Cond. by Joe Gardner
Bond Street--Terry Baxter, His Orch. and Chorus
One Less Bell to Answer--Vikki Carr, 1971
Walking Backwards Down the Road--Buddy Greco, 1970
Lost Horizon--Roger Williams, Orch. Arr. by Al Capps, 1973
The Look of Love--Jerry Vale, Arr. and Cond. by Jimmy Wisner, 1968
After the Fox--Ferrante and Teicher, Arr. by F&T; 1967
I'm a Better Man--Al Martino, Arr. and Cond. by Jimmie Haskell, 1969
Any Old Time of Day--Sue Raney, Arr. by Eddie Karam, 1966

Sue Raney IS fabulous - a long time ago I posted her versions of Bacharach's Knowing When to Leave and Try to See It My Way. The former is one of my favorite records. Superb.

As for Jerry Vale, he sang through his nose.

Anyway, thanks for the latest compilation!

Lee, I don't know how many second-hand stores you have had to visit to find this extensive a Bacharach library. I'm offering you a rarity you might not have: Danny Williams' recording of "Love Was Here Before the Stars," released on Deram just about the same time as Englebert's version--but, in my opinion, far better. I'm also offering Blossom Dearie's fabulous 1967 recording of "Trains and Boats and Planes." Of course, knowing you, these may be in the extensive tailings you have yet to mine. In any case, thanks for this compendium. And please keep it going.

My pleasure. You know, I always hate it when someone with a decent voice elects to sing in an odd style. Or maybe it's not choice. Anyway, ages back, at a Columbus OH record store, I heard Vale's LP of Italian songs, and he sounded great. Maybe he considered a septoplasty at some point, but the label said no, to just keep doing what he was doing. If you're getting hits....

And I was surprised by the amazing quality of Raney's voice. The packaging suggests something less serious. I'll have to start paying less attention to packaging.

Hi, David. Nope, I don't have those. Do you have the link?

I have to do a regular thrift rotation. I've been very lucky in this neck o' the woods. Small stores, but they change their holdings often.

Bacharach cast a wide and worthy spell over all music of the 1960s. Stan Getz and Cal Tjader are just some who recorded homage albums. And it is always rewarding to find that singers like Eydie Gorme recorded many of his songs. I'll put together an odds-and-ends "tribute" of my own and post it at WeTransfer for you to hear and, if you so desire, hijack. Meanwhile, keep rummaging.

And let me recommend a book that has temporarily (at least I hope it's only temporary) wrecked my life: "A Good American Family: The Red Scare and My Father" by David Maraniss. My dad, too, has an FBI file somewhere and I would love to read it. He was, at most, a minor league 'subversive', but I sure wish he was alive to help me in these dire times. What's incredible about this book is that the author is fair to all the players--even the witch hunters. Like the small pox, we keep having outbreaks of political and religious hysteria in America. Only I'm afraid more and more people are refusing the vaccine of the First Amendment.

Who told you about my search?? (hee hee)