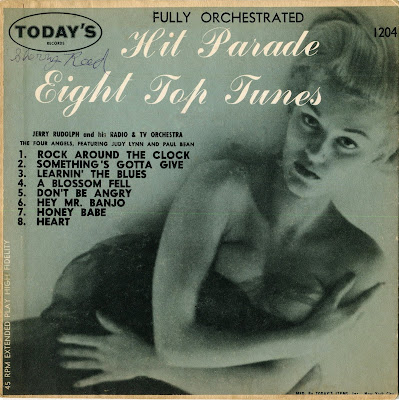 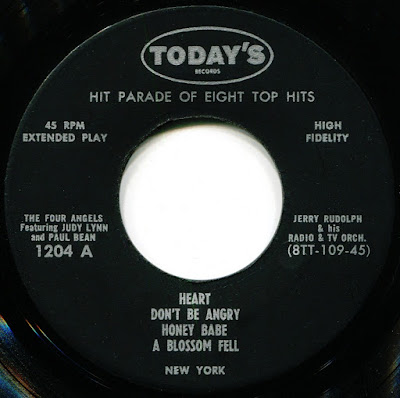 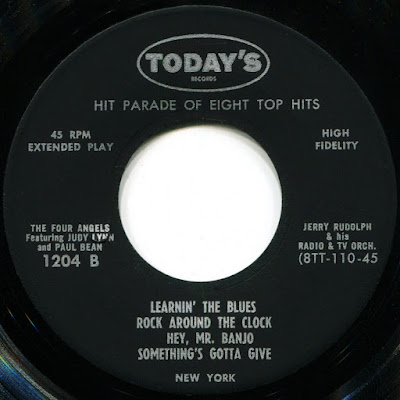 The Pinup Cover Girl has returned--along with Jerry Rudolph and his radio & TV Orch.  I apologize to the Four Angels, featuring Judy Lynn and Paul Bean, for not including them in the credits last time.  If they're really angels, they'll forgive me.

So, Michael asked if I have the Today's Record disc which includes Heart, Honey Babe, A Blossom Fell, Don't Drive Me Away, Hey Mr. Banjo, Learnin' the Blues, Hard to Get, Rock Around the Clock, and Something's Gotta Give.  Well, I don't have the 10" LP, but I have the 7" EP, though there's no Hard to Get.  Maybe that one is hard to get.  (Cha-dunk, crash!)  And the title of Don't Give Me Away is Don't be Angry, and it's here.  That's the good news.

The bad news is that these are heavily edited--the only way, I suppose, that Today's Records could manage to cram four tracks per 45 rpm side.  Rock Around the Clock may be the selection that suffers most from its cuts--missing is the solo (which is pretty lousy, actually) and the instrumental break preceding the final chorus.  So, being the great guy that I am, I figured out which of the six or so contemporary "fake hit" versions this is, and it's the one which also showed up on Gateway Top Tune (credited to Dick Warren) and Tops (credited to Fred Gibson).  The Gateway side is the complete performance, and the Tops is 2/3 of the complete performance (the instrumental break edited out). I ripped both of these and added them to the playlist.

The sound quality on this EP could be worse, considering the jammed-together tracks, though there's some pitch wavering on the closing numbers on each side--impossible to avoid, I suppose.  I did my best to center the disc on the turntable (the pressing is ever so slightly off center), but when the grooves are this close together, good luck avoiding what audio enthusiasts used to call "wow."

Notice that the word "of" is missing in the EP title: Hit Parade Eight Top Tunes.  Worse, notice the different title on the label: Hit Parade of Eight Top Hits.  Ah, but top tunes, top hits--what's the difference?  Like all cheapo labels, Today's Records was simply doing the worst it could.  And a word about the Rock Around the Clock cuts--for some reason, the Gateway Top Tune single was pitched almost a full semitone (half-step) above the other two.  And it has fuller sound and a lot more bass, almost making it sound like a different version.  But it's not.  To prove this, I doctored the Tops pressing, pitching it up, adding echo, and hiking up the bass--the result comes close to the Gateway edition.  I included the doctored version, so we get four Clock cuts in all--the one on this EP, the Gateway 45, the Tops 45 EP cut, and the doctored Tops cut.  All the same performance, but no two engineered the same way.  It's almost as if these junk labels were being--I don't know--careless.  And sorry about the hum on the Tops cut--it came with the record. 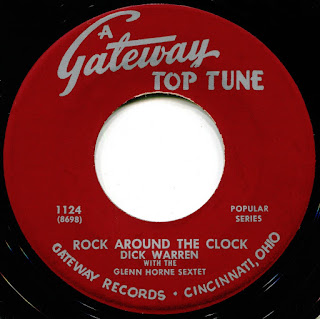 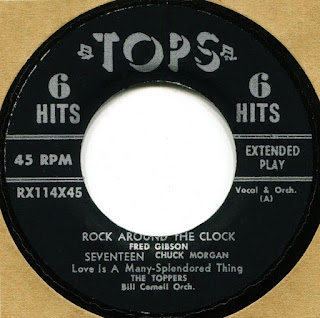 Lee
Posted by Lee Hartsfeld at 1:28 AM

ziipyshare is now banned in the UK & Germany. I now use https://workupload.com so I can share with everbody

Thanks. I'll give it a try.

And it's autographed! The model's name must be Sherry Reed!

Well, I for one am glad Michael made a request, this is all more great stuff. Thanks, Lee.

Wow thanks for this upload. I didn`t know that there was a 45 out of Today's top Hits so this came as a nice surprise. I remember my mom buying the LP with these songs on it at the old Sears store in Los Angeles and over the years I played the heck out of it. Thanks once again for a wonderful share and a great blog too.

Fully orchestrated! As opposed to what?

Ernie--Wow! Maybe I should try to peddle this on Pawn Stars. (-:

They can have their autograph guy come over....

DonHo57--You're welcome. And I love these things, too. I've never been able to figure out why. I guess they have a certain charm, and they're so fun to track down.

Michael--My pleasure! And I found that I had already done a burn of this EP, along with another EP from the label, but I didn't like the results, so I redid it. The other EP is a bit too distorted from needle wear, or I'd have put it up, too. Interesting--I wonder if there's a Sears/Today's Records connection? Though memory tells me Sears sold Gateway label knock-offs. So far, I've found zip about Today's Records. No clue as to who it was associated with.

The singer of Rock Around The Clock sounds winded as though he asked for it a little slower but was turned down.

I agree. There's a "Let up, guys!" tone to his performance.