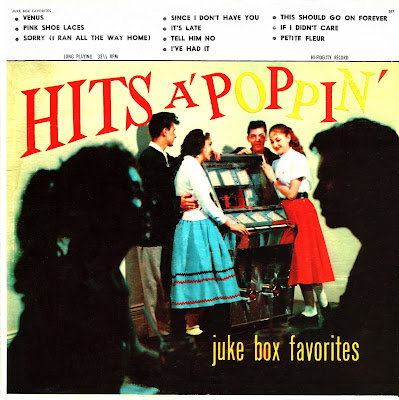 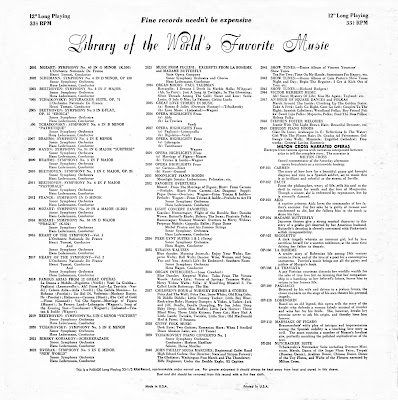 I don't know to whom we owe the thanks for the extra apostrophe on the cover (the one after the A), and I hope no one at Synthetic Plastics Company was fired over the extra use of ink.  The disc labels are without this apostrophe, so it's just a fluke, I guess.  And I think this is my first experience with this particular cover design.  It's the usual kids-\around-the-jukebox bit, but here they seem to be relaxing between numbers or something.  Discussing classwork, maybe.  Or saying nasty things about the couple in the foreground ("She was with Don just last week!").  I have no idea.

The previous owner wrote "March, 1959" on the front jacket (I cloned it out), and these are all 1959 hits, far as I know, so I think we can place the year at 1973.  I mean, 1959.  I did a clever trick with the top portion of this cover, which was yellowed with age.  I copied the image, put the whole thing in grayscale, and then I cut and pasted the grayscale cover top over the color image.  This got rid of the yellow age staining.  You had to be there.

Fun versions, all, and I just had to listen to Connie Francis' 1959 recording of If I Didn't Care to confirm that the talking-bass portion was actually part of her version--and it was.  It's a borrowing from the 1939 Ink Spots hit version, but I had to be sure it wasn't some trick SPC was pulling.  I don't trust them.  After all, SPC was an outfit that didn't even sense a requirement to name their labels.

I have God-knows-how-many "fake" versions of Pink Shoe Laces, some SPC, some Tops.  There may have been a Broadway label version, too.  Dunno.  This version rocks nicely, and I'm starting to like it after initially (that is, a few years back) finding it pretty annoying.  Pickwick may have done a version--Pickwick was entering the fake-hits scene in a big way about this time, but it may have already been acquiring Tops label material, and...  Ah, heck.  The history of these labels is too complicated.  I'd need a database at hand for every post.  To confuse things further--and the cheap labels lived to confuse things further--there was crossover between SPC and Tops versions, with the same versions sometimes showing up on both Promenade and Tops.  Trying to get this stuff straight is a ticket to a long stay in a padded cell.

VinylStudio cleaned this marked-up disc beautifully, save for the last track.  I had to kill about eight big pops and clunks (using the file-overlapping method), and there's still noise.  Nothing visible, so it's probably a pressing issue.  Gosh, with SPC, of all outfits.

Several, maybe more, repeat tracks here, including I've Had It, which sounds so much like the Everly Brothers that it seems wrong that the original was actually by the Bell Notes.  Venus is a fake of Frankie Avalon, of course, and those rock critics who beat up on on the "teen idols" must have major masculinity issues.  It's never a good idea to broadcast masculine insecurity, but then I suppose if you get paid for doing it....  The most idiot thing of all in rock "criticism"--and that's saying a lot--may be the bizarre notion that the teen idols were Elvis copies.  Really??  Very few of them made the slightest attempt to sound like Presley, save for the awful Fabian, who, despite having no singing voice, made some really good records.  Pat Boone, Bobby Rydell, Frankie Avalon, Freddy Cannon, and the rest were their own singers, and they happened to hit it big with the female crowd.  That zone was not the property of Elvis, and Elvis would likely have been the first to say so.  I've never blamed him for the idiot worship he received.  While we're on the subject, every lead and solo singer of the 1960s was NOT trying to sound like Bob Dylan.  Frankie Valli, Brian and Carl Wilson, Eric Burdon, Ian Whitcomb, Gary Puckett, and many others I could name sounded nothing like Dylan, and it was because they weren't making the slightest attempt to do so.  But we're getting ahead of these tracks, which are (in all probability) from 1959.  Not bad for a crap-label group of imitations.

"Fine records need not be expensive."  No, but they're usually not cheap.

DOWNLOAD: Hits A' Poppin' 207--Featuring Radio & TV Favorites (and forget the jukebox on the cover) 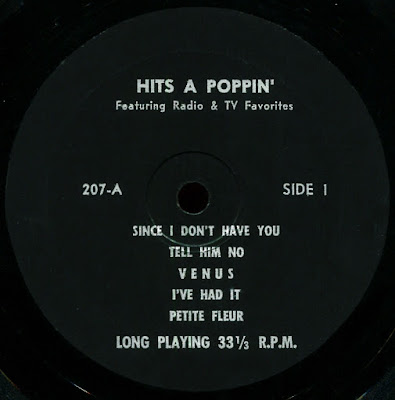 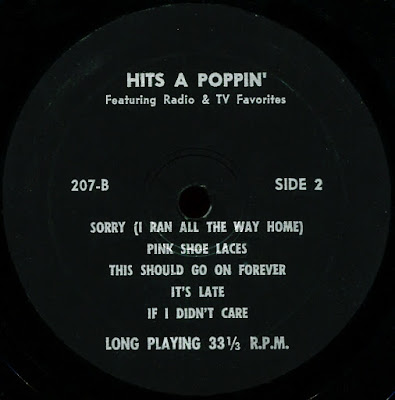 Posted by Lee Hartsfeld at 8:22 PM

I sure love these...Not sure why but I sure can hear in my head a Stan Freberg bit to the 'Since I Don't Have You' cover.......

"I've Had It "+ "Since I Don't Have You" are the same tracks as The Grasshoppers On Promenade. Which begs the question where the others taken from Promenade versions?

Oh, definitely. This is Synthetic Plastics Co., so all of the tracks would have come on Promenade, likely.