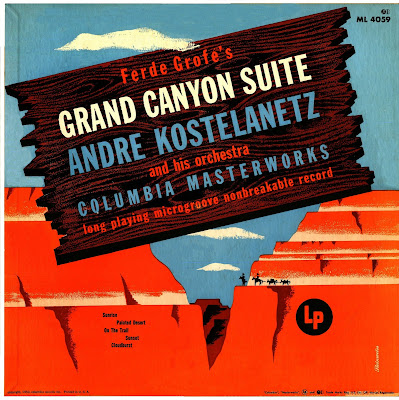 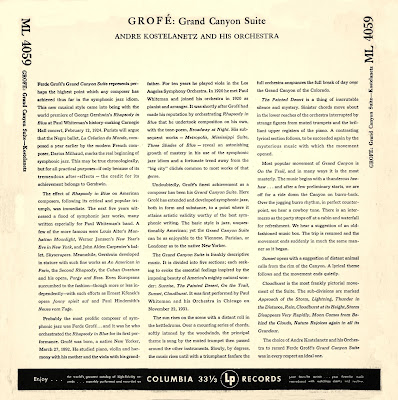 I'd hate to commit myself to a favorite work of music, but Ferde Grofe's superb Grand Canyon Suite is a major contender.  Once upon a time, and thanks to Toscanini taking on the work and making it an American concert staple, GCS was performed all the time.  I don't think that's the case any more, and it's American music's loss.  I love this piece beyond words, and I had the great fortune to hear it played on the family hi-fi growing up--my brother and I would request it, and we would actually shiver our way through Cloudburst, which can be scary when you're young and it's coming out of a big speaker with lots of boom.  It was the fabulous 1958 Eugene Ormandy version I came to know down to the last pause, and it was the perfectly engineered mono version, not the thin-sounding stereo atrocity.  Ormandy did a blah later version which sounded phoned-in while he was half asleep.  Hard to believe the same person led both recordings.

Ormandy's is probably my choice for all-time best, Grand Canyon-wise, and this despite the inexcusable lack of a second take on Sunrise--someone in the brass section hits one of the wrongest notes ever blown before the concluding contrary-motion chords.  My father always winced at that point, wondering why they didn't redo it (or edit the tape--that was an option in 1958).  But one epic stray note can't destroy an otherwise marvelous rendition.  That version's equal, or very close second, is this splendid, stupendous, and nearly flawless 1941 Andre Kostelanetz version (it has a heck of a great cover, too), which of course originally came out on shellac--and, if my faulty memory is correct (probably not) this may be the first-ever recording of the expanded score.  Grofe originally wrote GCS for Paul Whiteman's 30-piece (or so) concert orchestra in 1931, actually starting the piece in 1929 (Whiteman recorded it in 1932), and while Canyon was quite effective in its smaller setting, a larger treatment simply had to happen.  What's cool is that this version has some vestiges of the earlier, smaller setting.  My two beefs about this version are 1) the cornball downward violin slide (portamento,whatever) toward the end of the otherwise indescribably gorgeous Sunset, making it sound like silent film music or something, and 2) the way the strings just kind of disappear for a moment during the closing reprise (in which Grofe combines all the main strains, Grofe-style).  Otherwise, this version is so spot-on, it's as if the Russian-born Kostelanetz knew how to present American music far more skillfully than anyone born here.  In fact, it's not "as if"--he did, period.  Why Arthur Fiedler is so famous, when Kostelanetz was so very much better at this kind of thing, I'll never know.

The sound is scary-good for 1941--you're almost right there in the studio at times.  Studio noises can be heard.  Pages turning.  Vocal sounds that are somewhere between throat-clearing and someone catching his breath.  The only thing wrong with the otherwise superbly vivid sound is the inflated bass.  I had to bring it down to protect headphone listeners and/or woofer cones.  Why this flaw in such otherwise magnificent sound, I do not know.  And here's the weird thing--I have three copies of this green label edition, and only this one features the vivid, wide-open sound it's my privilege to share here.  The others are pinched, by comparison, with fidelity closer to the CL series reissue of this ML (Masterworks) edition.  This performance, by the way, was available at least at late as 1966 on the Harmony label, and in fake stereo.  I used to have a monaural edition of that, except it was a U.K. pressing, and I have no idea what happened to it.

To the genius of Grofe and Kostelanetz and the 1941 Columbia sound engineer: 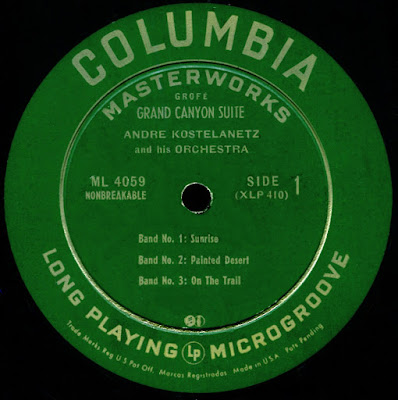 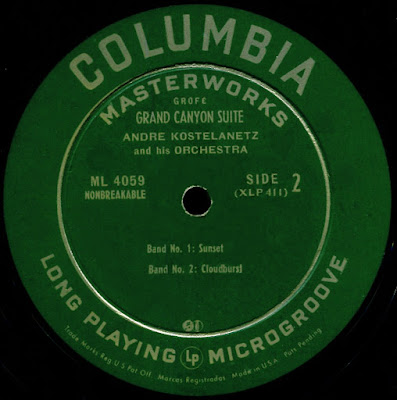 Posted by Lee Hartsfeld at 9:41 AM

Interesting stuff. Glad to see you're getting back into the Grofe. :)

Have you heard the Johnny Cash-narrated bit tacked onto the end of Andre's later stereo re-recording of this? I'm sure you have. :) I always kinda enjoyed that bit.

Thanks for this! I've often seen the 78 album but have never heard it.

This is the slowest download I have ever encountered at your blog. Is it my iMac or something else?

The workupload server must be slow. It downloaded fast for me just now (about one minute), but occasionally it has been sluggish. I wouldn't be anything to do with my blog. And the file is not very large. My guess would be a lot of traffic at the hosting site, or some glitch. I have cruddy rural DSL, and uploads and downloads are usually fast with workupload.

Thank you Lee, This is great stuff and a fantastic cover.

It downloaded at warp speed and I'm listening with intoxicated glee. I am so glad you have the bravery to rank this as your favorite piece of serious music. My dad had the Toscanini recording and he felt almost as reverently as you do. By the way, this is superbly recorded, although (as you said) a bit boomy in the bass. Still, hi-fidelity came sooner than I thought. And I have come to cherish monophonic sound. Thank you. My goose bumps are preventing me from praising you farther (or is it further?). "The Painted Desert," I'm sure, would have greatly impressed Debussy.

Yes, "Painted Desert" is amazing. And the modal descending figure which starts it seems inspired by the "Faun" flute intro--a darker, simpler version, but very Debussy-esque. I wish I had my piano version of the score handy--that beginning always fascinated me. Finally having it on paper was a thrill. And I've always thought hi-fidelity came in about this time--say, between 1939 and the year of this recording. What was needed, of course, was a quieter medium, and then vinyl made its delayed debut. Glad you're loving the music and sound! It's odd how the sound on this copy contrasts with the much more EQ'd sound on my other green-label LP copies. The lower freqs were an issue, of course, but I just had to opt for the clear, open fidelity here. I cut the lower end just enough--I didn't want to mess up the dynamic balance.

Thank you for this treat. Grofe is seriously neglected by the recording industry. My all time favorite of his is the spectacular Niagara Falls Suite of 1961, which I find remarkably similar to Aram Khachaturian symphonies - particularly in the bold and driving sections and the tonal construction.

My pleasure! And Niagara Falls is also one of my favorite Grofes--and there was a premiere recording of it (w. Grofe at the baton) at eBay years ago, which unfortunately was priced too high. You have the NAXOS Grofes, I assume. I forget the label, but there's a 1938 Paul Whiteman concert on CD which features Ferde's wonderful Trylon and Perisphere, which isn't quite like anything else I've heard by him--sort of Metropolis times four, if that makes sense. Grofe in a more modern mode than usual. There used to be a wonderful Grofe page managed by Kevin Tam, but it seems to be out of operation. It featured Symphony in Steel and other rarities. Speaking of rarities, I should repost Grofe's Valley of the Sun Suite. And do a re-restoration (re-restoration?) of Three Shades of Blue.

Don't forget about the Salute To Congress he created after the Civil Rights bill passed in the mid-sixties, if you're looking for rarities. :)

That's right--you gave me the music and the scans. And I had it up for a bit. It's on a CD-R someplace. Around this place, "someplace" means LIR (lost in rubble).