Be sure to give my last post a listen--the file portion, that is.  Andre Kostelanetz' 1941 rendition of Grofe's Grand Canyon Suite is up there with the very best versions, and, while it's the expanded score (the one that followed Grofe's arrangement for Paul Whiteman), it has vestiges of the Whiteman.  I know enough about Grofe to know that he did constant revisions--he was an improviser at heart, as his amazing piano roll performances of the 1920s demonstrate.  Years ago, someone who was an orchestra member for the premiere of Grofe's Valley of the Sun suite told me Grofe was doing revisions right up to the wire.  (Not a fun thing for the musicians, though....)  The unbelievably vivid sound of the Kostelanetz Canyon is an example of what could be achieved as early as 1941.

Below: I'd forgotten about this 1908 ad that I put up years ago.  Sometimes, going right to the pop-culture source--old magazines, records, etc.--not only cuts through time but also through a lot of accumulated propaganda.  Lies, in short.  The tobacco industry has waged a long, and tragically successful campaign to convince Americans that smoking may or may not to be harmful to human health.  There remain people convinced that the jury is still out.  Amazing, then, that 112 years ago, it was apparently common knowledge that, as the ad says, tobacco kills.  I don't recall the name of the magazine I clipped this from, but the paper was so fragile, it couldn't be laid onto my scanner without damaging it--so I resorted to clipping.  Typically, I would have avoided marring the magazine, but it was pretty much done for, anyway. 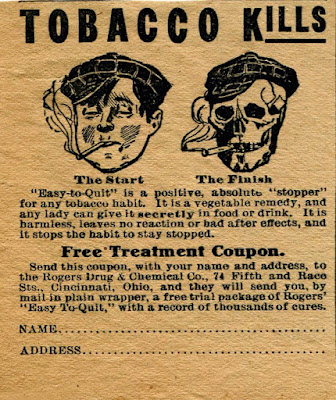 Another old ad--this time from 1887--for a polygraph.  I actually saw one on eBay, and for way too much money (for my wallet, that is).  You'll note that the "polygraph" had a slightly different function than the invention to come.  Without precedent as a Scientific Toy and "invaluable to ladies doing Fancy Work."  Apparently, ads have always bent the rules of capitalization and when to use bold font.

Posted by Lee Hartsfeld at 8:16 PM

I vaguely remember the Spirograph, but I vividly remember Tinker Toys. Totally cool, except when they broke....