From the out of print CD, Paul Whiteman--Carnegie Hall Concert, December 25, 1938, a gem of a Ferde Grofe composition--the three-part Trylon and Perisphere, written for the 1939-40 New York's World Fair (with all three parts contained in the single file).  I have a copy of the original score from friend of the blog Kevin Tam, except under its second title, Black Gold.  It's fun to study, though I don't have an orchestra handy to play it--luckily, this marvelous recording exists.  I'm not sure why Grofe gave it its later name, but under any title it's one heck of a delightful and entertaining work, and not quite like anything else I've heard by Ferde (and by now I've probably heard about 4/5 of everything he penned.  After spending more than half my life convinced I'd never have that honor).

As narrator Deems Taylor humorously notes, Grofe reverses the order of the structures in question, first describing the Perisphere (after a superbly scored mysterioso start which establishes the main themes), then going on to the Trylon, which is where the work gets very rousing.  Not just rousing, but hang-on-to-your-seat rousing.  Oh, and in the third movement (which almost imperceptibly flows from the second) we hear the ascending chromatic note patterns that later appeared in Grofe's 1950 Rocketship X-M score--and then, two years later, in his Valley of the Sun Suite.

The CD liner notes describe the Trylon and Perisphere as the "two structural symbols of the (1939-40) fair; the Trylon was a 7-foot-high obelisk, and the Perisphere a 200-foot-wide ball-like structure."  Like so: 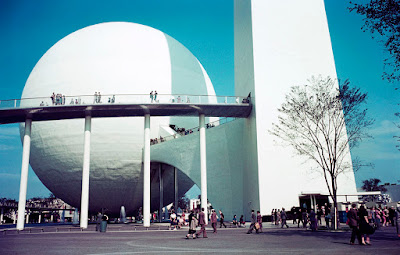 Yup, those things.  The structures no longer exist, though the Unisphere from the 1964 Fair still stands, and I saw it during my one trip to New York, back around 1985.  I was on a bus, and, suddenly, there it was, and it didn't look as epic as I would have thought.  But this was before it was restored, and I do recall it definitely seemed in need of repair and a good shine job.  Restored to its original glory and all lit up at night, it must be something to see....

And we can only imagine what an awesome sight the Trylon and Perisphere were.  But, thanks to Grofe, we know what they sounded like.

Lee
Posted by Lee Hartsfeld at 8:38 AM

This is great thank you. But how about the entire CD?

Yes, it's odd that the iconic Trylon and Perisphere disappeared. I suppose they weren't built to last - it sure doesn't look that way from the surface of the Perisphere shown in the photo.

Anyway, thanks for the music!

I wouldn't feel safe presenting the entire CD. A single selection is low-risk, but the whole thing might be inviting attention I don't want. Otherwise, I would....

The thing is, it's a 2-CD set. It's a lot to be putting up. I'd rather not risk it. As a rule, I only do vinyl rips, but this is such an important and uncommon work, I made an exception.

I've been to the site of the 1939 & 1964 World's Fairs in Queens. What's left is pretty impressive, as you mentioned. At the entrance from the subway stop, there are some enormous tile mosaics on the ground that show some of the sights from both fairs. As I recall, the mosaics were starting to fall apart from the foot traffic, but were still pretty impressive. The Unisphere is pretty neat, but it was cold when I was there, so there was no water in the fountain. And I've never been at night, and might be a little nervous to be in that park in the dark. The towers that are now familiar from the first Men In Black movie are cool, and there is now a small community theater at the base of them. Other remnants are there, like some old rocket ships, and the original helipad. It's a neat place to visit for a day. Shea Stadium was right next door before they tore it down.

Ernie--Cool. I wish I'd gotten more than just a passing glance at the park. I assume it was in the park at the time I saw it (about 1985, en route to the USS Merril, testing platform for the Tomahawk missile!). I'd have loved to look around. But I recall the Unisphere looked in definition need of restoration. The perisphere (dunno if I should divulge this) looks almost exactly like an antenna we had on my Edzell, Scotland Navy base. Most of the locals had no idea what it was, though at least one taxi driver nailed it. I told him I couldn't confirm or deny his take, though he clearly knew that I knew that he knew. (Isn't that a song title?)

Er, in definite need of restoration. Not "definition." Hello.

For a long moment there, I thought I was hearing the beginning of an "On The Trail" fantasia, but Grofe left that trail behind. Still, there are certain signatures of composition and orchestration. I am constantly amazed at the traces of Debussy and Ravel that run throughout his work. He obviously felt as entranced by "The Three Nocturnes," "La Mer," "La Valse" and "Daphnis & Chloe" as many of his contemporaries did Stravinsky's 'Firebird' and 'Le Sacre'. How wonderful it would be if symphony orchestras took his works out of mothballs and set them sailing in our lives again.

I can hear some "On the Trail," too, plus "Mardi Gras." But this is the first time my ears made the "Rocketship XM" connection--it's pretty blatant, but I missed it in previous listenings (is that a word?). I'll have to listen to Debussy's "Three Nocturnes," because, if I've heard them, it was many years back. I always felt Ravel was the big influence on Grofe, but of course Debussy influenced Ravel pretty majorly, so it's an influence of an influence! Grofe's brand of scoring is the his Ravel-esque aspect, really. Maybe Debussy's influence is in the harmonic department. Grofe is typically put down (by those critics who resented his popularity) as derivative, but 20th century composers were all experimenting along the same lines, so that charge could be leveled at just about anyone. Even Erik Satie's bold harmonies were anticipated by Chopin, Liszt, and Wagner.

Thank you for ALL your Grofe posts. Fantastic.
Gary

You keep putting up the coolest music! I've been a band director/composer/arranger for the past 41 years and I really enjoy your musical tastes. Is there any chance of getting a copy of the score for Trylon to study/play with? I think my community band would enjoy playing it.

Thanks again for sharing such terrific tunes.

Mark--Thanks for the nice words. I'll need to get in contact with Kevin Tam, the person who sent me the PDF of the score. I don't want to share without authorization. I recently upgraded to a new PC, but I think I can dig up my old contact list.