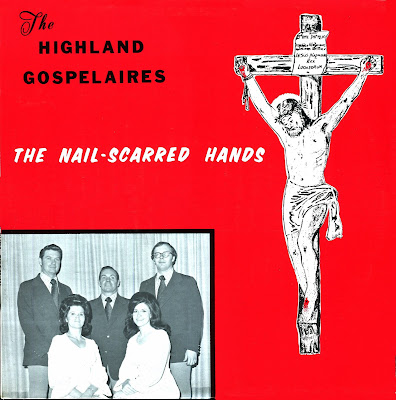 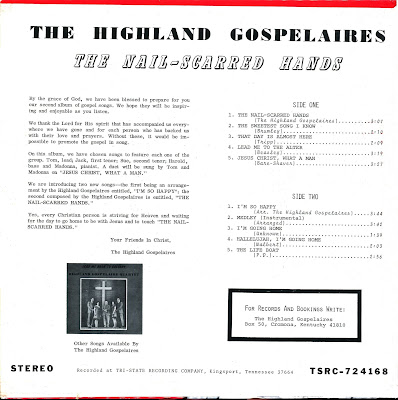 I don't have much time to write notes, which is okay, since I know nothing about the Highland Gospelaires, except that they made this LP and at least one other.  I found a 1973 copyright entry by the group for The Nail-Scarred Hands, so maybe the LP is from that year.  Hence, 1973? as the year.

I had no time to Google further.  They seem to have been headquartered in Kentucky, though this was recorded in Tennessee.  The label, the Tri-State Recording Company, put out a lot of gospel LPs, though this one isn't listed at Discogs.  I was hoping Jesus Christ, What a Man might be another version of One Solitary Life, but no such luck.

A lively and very enjoyable semi-professional effort, with the performances of variable quality, which is not a put-down--it only adds to the real feel of the LP.  Best tracks are the faster, four-part harmony numbers.  Obviously, the group is being aided by studio musicians throughout.  To answer the standard question, "Who's the fifth person if it's a quartet?" the fifth person is Madonna, the pianist, though the keyboard player we hear may be someone else--maybe a member of the Tri-State Recording Co.'s house band.  I'm just guessing.  Re Madonna, only first names are used on the jacket--maybe they had meant to include a surname but forgot.  Obviously, this isn't the Madonna, who used to get pad for playing with herself on TV in front of a live audience which included young folks.  Had she done the same inside an adult theater, maybe she'd have been arrested like Pee Wee Herman.

Sue (whoever) is credited as second tenor, which must make her a contralto.  I guess.  Anyway, bear with the drab first track, as it gets better very quickly....

Wow......the opening few bars are kinda scary but what a recovery!!!! This is great stuff. Thank you again for a bright start to Sunday!!!!!

You're welcome! I loved this one. And, yes, it majorly bounces back from that weak start.

Poor Peewee. That was here in Sarasota. The theater is gone now.

Interesting album Lee, thanks! My favorite cut is Sweetest Song BTW, always been one of my favorites, almost wherever I've heard it. I have (what I believe to be) the original version (recording) of that song, I'll have to send it your way! Tri-State was out of Kingsport, TN (as I'm sure you know) and from what I gather, was active for a number of years, running the gamut, from extremely-local-sounding efforts, to professional groups. Of course, through Tri-State's efforts, some of those local groups (even ones from their area) became professionals LOL! Oh and did you notice at the beginning of Sweetest, the tape speed variation from the start of the music, to when the singing began? And, per your comment on the musicianship, I'd say the Piano player was the group's, everyone else belong to Tri-State. Don't hold me to it, it just sounds that way to my ears. Here's an example of a good, local group who used Tri-State, complete with a mic moving during the song LOL!

Again, thanks, love and prayin' for ya!