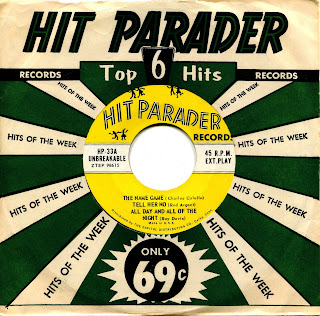 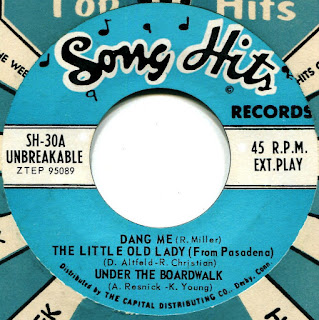 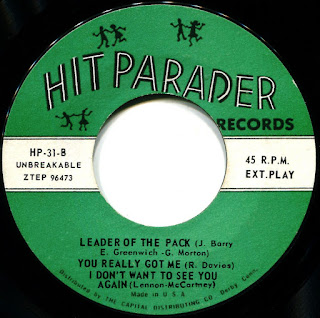 As everyone knows, there were two Sixties--the real and the fake.  Today's hits were chosen from the  reverse-reality realm that we call the Fake Sixties--that strange and mysterious but rather fun zone in which cheap meant extra value, in which extra value meant, "Hey, use your head and get these for way less--three to a side.  Can't beat that.  Sure, they suck, but you saved money."  The land of sound-alikes which didn't always sound alike.  A dimension in which less dough meant better, not worse, product.  A sphere in which the mediocre, sometimes crappy, productions of junk labels brought pleasure to the listener, not a desire to toss the second-rate vinyl into a solid surface just to see if it would shatter.  It is from this alternate zone that our post's "hits" have been culled.

Exactly how these records managed to find their way into our dimension, I have no idea--I wasn't the original owner of any of these.  There must have been periodic cracks in the wall that separated the fake from the real Sixties--cracks large enough to slip these through, anyway.  Maybe people were exchanging real hits for fake.  (Talking through the divide): "I'll give you twenty fakes for one real Beatles single."  "Make it twenty-five, and you're on."  By all the basic laws of the universe--ones I just made up--any items from the fake Sixties should have imploded, or at least vanished, upon contact with the real decade, but I guess my made-up laws are incorrect.

Most of the fakes in this playlist are the fault of the Song Hits and Hit Parader labels--labels advertised in the magazines of the same names and in Charlton Comics. The Capital Distributing Co. of Deby, Connecticut was the guilty distributor, and I suspect Pickwick was the guilty supplier of the masters.  These were the 79-hits-for-$4.99 type of mail-order fakes, though they must have been sold at stores, too, since display boxes have survived.  I recently got a display box for my own collection--it showed up on eBay cheap enough that I went for it.  There are absolutely no artist credits for any of these (which must have been a relief to the artists), and though it's no big deal, I goofed in my track labeling and gave the source for All Day and All of the Night as Song Hits 30 when it's actually Hit Parader 30.  The other version of that song in our playlist is a British version, from the Top Six label.

A.R.C., by the way, is Allied Record Company.  Now you know, if you didn't before.

I assembled this playlist some time back--maybe even as far back as a year--but somehow the tracks ended up stranded, waiting to be combined into a file, but with me having forgotten about them or having started another project, or off searching for gold in Alaska.  I don't remember.  I just know that, looking through my MAGIX projects two days ago, I found a semi-completed one called "Fake Sixties, Part 2."  Using Holmesian-level deduction, I figured there must have been a Part 1.  Looking in the music folders from my previous PC, I found a folder titled "Fake Sixties."  I eagerly opened it and beheld... nothing.  A totally blank page.  But there was another folder within the folder, so I opened it, and... the rest was fake history.  And these are... the Fake Sixties, Part 1! 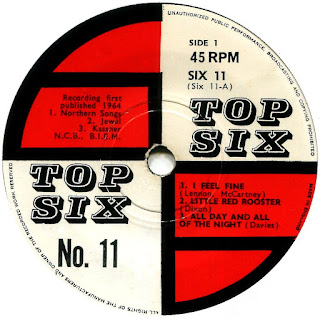 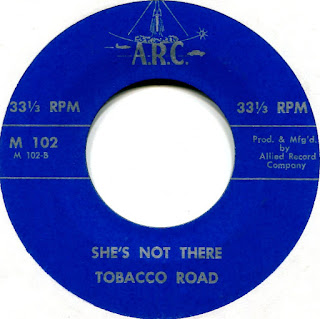 Thanks love those posts filled with obscure covers

Glad you rescued these from oblivion. Twice, it sounds like. :)

Wonderful as usual story line here and yes, I subscribe to your theory that there is (or was) an alternative reality that allowed for the creation of these fakes - I mean, in this Litigates society how could one get away with this? The royalties asked surely would have sunk the effort right?

Your preface lines are what keeps me coming back even if I don't always grab the hits so please, keep doing what your doin' there

Surfin Bird, This Diamond Ring and Dang Me were awful enough on their own. They did not require the Pickwick folks to make them even worse. But still, I want to see what that company's "artists" made of the Zombies and the Kinks. Probably American revenge for the British Invasion.

Maybe it's just me, but I am always disappointed when these records don't specify the artists, even with a fake name. Is that a factor that separates the cheap labels from the really cheap labels?

Ernie, yes! Very true. They had some nasty words for me when I pulled up the file. I can understand, with them being left to linger so long.

Mac, Thanks--sometimes I think my essays are too long, so I really appreciate nice words about them. And it's astonishing, isn't it, how the cheapies could copy the sound and original charts down to the last note and no one even blinked? Then again, we have "cover" bands nowadays, and their output would fall into the sound-alike category. But I imagine the licensing is far more complex now. Of course, the cheapies were operating on the edge of legitimacy, so maybe the makers of the real hits decided it was less trouble to simply ignore them.

Buster, I always liked those last two titles, and as awful as "Surfin' Bird" may be (and it is), I have affectionate memories of its use by Cleveland and Detroit horror hosts for some of their bits. As you probably know, the Trashmen were sued for ripping off the Rivingtons' "The Bird's the Word" and "Papa-Oom-Mow-Mow," and it wasn't until years later I discovered neither had originated with "Surfin' Bird." The lyrics are so garbled, I always thought it went "The bird--the bird--the bird is the weirdo; Well, the bird, etc." and I wondered what the hay that could mean. I assume "The Bird's the word" refers to a dance--as in, the Bird is the latest thing. That a group thought it could rip off twose hits and not get sued tells us a lot about the casual attitude of the time toward song rights.

Lee - About Surfin Bird: yeah, that surprised me too. If I knew the sources of the Trashmen record the first time I heard it, everyone else must have, too.

The parallel universe does seem to have a different pitch than we have here......I wonder if the originals sound off key in their world?

I think the two best covers are two of the songs I sneered at - "Dang Me" and "This Diamond Ring." I suspect it's because a} it's relatively easy to imitate Roger Miller's mannerisms and b) anyone can sing as well as Gary Lewis. It's harder to match the vocal quality of Colin Blunstone of the Zombies or even Mick Jagger. And it's tough to come up with the power and elan of the early Kinks.

Fun to hear, though!

Scott--That's a good question. I'm guessing that they sound perfectly on pitch! And lavishly produced.

Buster--Yes, the faux Kinks are really under-produced here, though I think the British Top Six version fares much better in terms of guitar distortion. But the groups just aren't into it. And the real versions feature that Chess-style mic-overload effect that the Stones also employed. This "Dang Me" does come off well, though the singer is no Miller. I have a higher opinion of him than you do, but we're on the same page with Gary Lewis--I think that, even back in the day, I found this voice pretty lacking. But the Gary Lewis productions were so superb, especially "Just My Style." I'm surprised that the cheapjack Song Hits label came as close as it did to the full sound of the original, with just the right type and amount of echo. As opposed to the Hit Parader "Good Vibrations," which doesn't even try to sound remotely like a Brian Wilson production. It's like some guys recording a halfhearted demo in their bedroom prior to working out the harmonies.

Scott--Oh, and in the Fake Sixties realm, the Song Hits and Hit Parader label designs look high-class and elegant.

Thanks for digitizing these cover records, I so look forward to these every time!