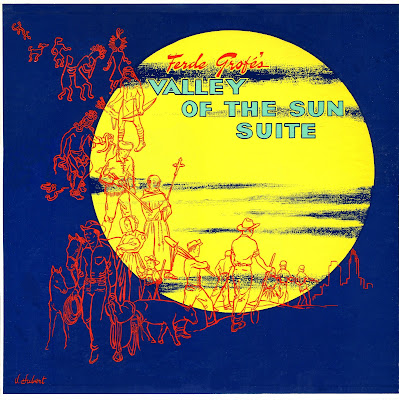 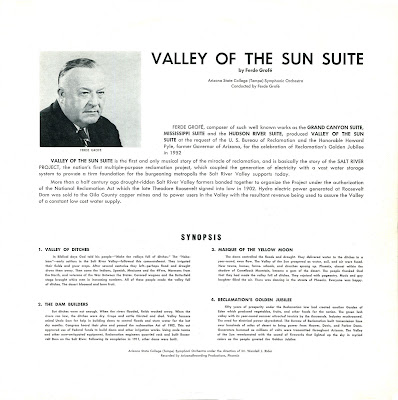 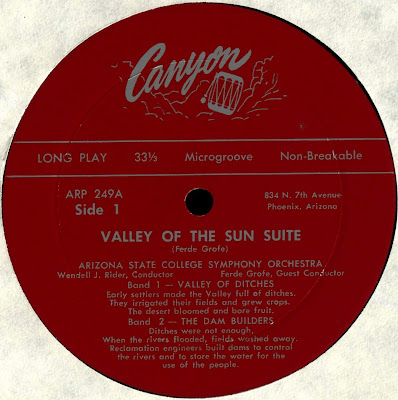 The story of the Salt River Project, the Valley of the Sun Suite, was composed by Ferde Grofe on request, the notes inform us, "of the U.S. Bureau of Reclamation and the Honorable Howard Pyle, former Governor of Arizona, for the celebration of Reclaimation's Golden Jubilee in 1952."  No recording date is given, so this could be the premiere performance or a later one.  At any rate, this LP is not a common item, and this certainly isn't one of Ferde's better-known works, though I regard it as a joy from start to finish.  From the mysterioso first movement to the joyous, Johann Strauss-esque (am I allowed to type that?) conclusion, this is mood music of the highest class.  Making things more interesting are Grofe's reuse of cues from his 1950 movie score for Rocketship X-M  (in The Dam Builders) and the insertion of a chord sequence from his very first work, Broadway at Night (1924), at the beginning of the last movement.  Grofe was not shy about reusing material, and why not?  X-M itself reuses a portion of his Symphony in Steel (1935), and his score for The Return of Jesse James (1950) uses the opening section of his Tabloid Suite (for a telegraph office scene).

Anyway, I figured it was time I re-posted this.  Though the original post is long gone, I notice that my Box.com file is still up.  It appears someone was linking to it--which is great!  That means I was continuing to share it and not realizing it!  This recording is very uncommon, I should note.

Many folks, understandably spoiled by Grand Canyon, dismiss Grofe's other works with "I was hoping for the Grand Canyon Suite," but not every piece can be a composer's masterpiece, to be fair.  And it's foolish to expect as much.  It's to Ferde's credit he didn't keep rewriting the same hit.  A credit to his virtuosity, and to his genuine love for each and every locale he chose for his suites.  Anything I can do to help keep his music alive in cyberspace, I will do, and gladly.

Give this one a chance.  I've grown to love every last bar, and I've even forgiven Ferde for the awkward franken-segue toward the end of Jubilee, which he must have penciled in at the last moment.  No biggie--the movement is so superbly alive and tuneful, it's as if that rough cut never happened.  Enjoy!  And check YouTube to see if Kevin R. Tam's arrangement (and revival) of this piece is still up.  I forgot to do so before writing this....  (Update: Yes, it is, and in a single post.)

Posted by Lee Hartsfeld at 9:05 PM

I just listened to your terrific transfer of the Grand Canyon Suite - now I will check this one out.

As one who lives in the Valley of The Sun, I wasn't aware of this piece of music. Time for a listen. Thanks!

Let me know what you think, everyone. The orchestra isn't top-notch, of course--nor is the recording. Then again, it this IS the 1952 premiere recording, then it's exceptional for a live taping. But I suspect this a later version, with Grofe returning to the baton.

Not bad at all for an orch. composed of students, and with Grofe revising up to the wire. Something about the Old Vienna-style last movement absolutely works for me, and "Masque" is just plain excellent writing and scoring.

Enjoyable piece, and OK performance. The pressing appears to be from the 60s or 70s. It's hard to say about the recording - it has very little dynamic range and is in mono, but the frequency response is pretty wide, so it's probably not from 1952.

Yes, it's definitely not 1952, pressing-wise. Ditto on the freq response--too wide to be 1952. I don't know why live recordings of this type are usually so dynamically flat, unless it's simple lack of professional mixing. Not sure how I would do it, except I would want at least four mics, and above the orchestra. This would allow for balancing the sections, and it would give some natural fullness to the sound.

Doing a little digging, that dirty college in Tallahassee seems to have a large archive of Grofe stuff, and they appear to credit this recording to 1957. November 6th, specifically. Look at the PDF on page 34. I think the green color means they've lost the copy they had earlier... Go Gators!

Yes, the college has a huge Grofe collection. I forgot about this. I have a number of the tracks--two friends of the blog ordered copies of a number of them. I didn't think to look here. The 1957 tape would have to be it, but it appears in two different boxes--the one in green (reel 134) includes other items, whereas reel 75 is still here, looks like (?). I think I have the 1952 recording dubbed onto CD....

Lee - Looks like your guess on the date was spot on.

Yeah! It's also possible I remembered it from the fsu list, which I've seen before. I have much of the stuff on there, and Kevin Tam had a lot of it up at one point, but his site is down. I'm hesitant to put it up, since it is part of the fsu collection. I think I have that 1952 recording--I know I have another early "Valley" recording. I've heard about 4/5 of everything Ferde wrote by now, but hesitate to post. Kevin was in contact with Ferde Grofe, jr., so maybe he was clearing the rights through him. That end of the biz, I know nothing about. I know that Grofe's suites are still copyrighted, text-wise. The whole area of music copyright seems like one big mess to me. I suspect mob involvement with the music biz has something to do with the complication of things. Mob doings are all under the table. No "Godfather" reference intended there....

Hesitant to put any of it up, that is. Wonder if Kevin ran into issues? Or maybe his hosting service went kaput, and he decided to discontinue the site. Mysteries. Cyber-mysteries. There are a million mysteries in the Naked Internet. This is just one of them. (I've only had one beer, so it can't be the alchohol....)