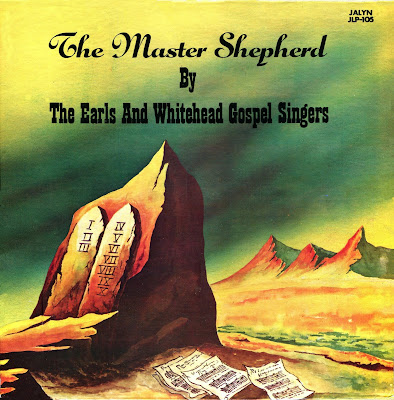 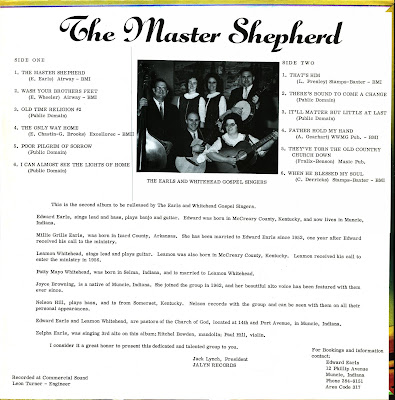 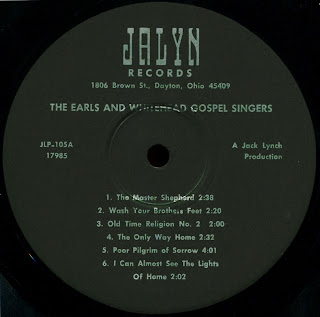 I don't know if Jalyn Records of Dayton, Ohio gave groups a choice when it came to the stock-art covers--maybe the groups just had to wait for the LP to come out.  Anyway, Edward and Millie Grills Earls (say that 30 times) and the Whiteheads are back at the blog this morning (or whenever you happen to be reading this).  I previously featured their 1967 LP on this label, They'll Never Change the Way, and this preceded it by a year, and with a different group photo on the back.  Though I was only familiar with two of the songs--They've Torn the Old Country Church Down and I Can Almost See the Lights of Home--I enjoyed every note of this.  A total pleasure, and some of the smoothest bluegrass gospel you're going to hear anywhere.  You can catch the personnel info from the slightly confusing liner notes, in which the writer doesn't always inform us as to the role of a given performer.  For example, we learn that Millie Grills Earls "was born in Izard County, Arkansas.  She has been married to Edward Earls since 1952, one year after Edward received his call to the ministry."  That's fine, but what does she do on the LP?  I assume she sings, but all I can do is assume.  Patty Mayo Whitehead's function also goes unmentioned.  She was born in Selma, Indiana and is married to Leamon Whitehead.  Ohhh-kay.  But I assume she adds to the music in some way.  Not the best notes ever....

The group was based in Muncie, Indiana at the time, and besides Arkansas and Indiana, members also hailed from Kentucky.  Kentucky--3, Indiana-2, and Arkansas--1.  Three other folks are mentioned, but not their birthplaces.  Being in a hurry to get these notes written and the post scheduled, I could have used some more complete and straightforward information, but then the casual nature of the liner notes actually goes kind of well with the friendly, honest, down-home performances, so why should I complain.  This is take-off-your-shoes-and-relax-a-spell music, and I'm getting all uptight.  I'm missing the point.  I need to just flow with the go.  I mean....  Whatever.

I didn't have time to do my usual obsessive verifying of composer credits, except for discovering that Poor Pilgrim of Sorrow--aka, The Pilgrim's Song--is the work of the great African-American hymnist, Charles Albert Tindley.  I've always felt that Tindley arrived too early in the game to get the credit he's due, with black gospel somehow popularly assume to have started around the 1920s.  You'd think, in a day when fact-checking was never so easy, that popular misconceptions would die quick deaths.  If anything, received falsehoods are more likely to be maintained rather than corrected.  What would Marshall McLuhan conclude?

A great copy of this LP--perhaps previously unplayed, even.  A couple surface imperfections, but they were easily spliced out with MAGIX.  Luckily, Rite Records pressed this, so I was able to find the year--1966.  That would explain the mono.

The site for Rite Records had me convinced it was spelled RITE, since it insists on doing so, so if I typed "RITE" on the mp3 tags, now you know why.  RITE?  RITE.

To the great bluegrass gospel sounds.  And don't miss the bonus Stuart Hamblen single after the LP.  It has a separate download link.


And, as promised, a Stuart Hamblen single on the Columbia label--year: 1953.  For some reason, I never associated Hamblen with Columbia, but he did a lot on that label.  Earlier, he recorded for Victor.  I love Hamblen's stuff.  It's often corny and folksy, but it's so beautifully written and arranged, I can very easily forgive that fact.  Hamblen was a songwriting genius, and I love the talking portions of his tunes--a device I usually dislike in gospel music.  He just had a masterful touch.  This was a lucky thrift find.

Partners with the Lord (Hamblen)
You Must Be Born Again (Hamblen) 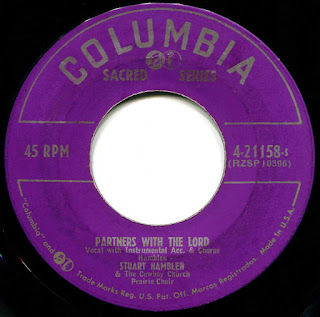 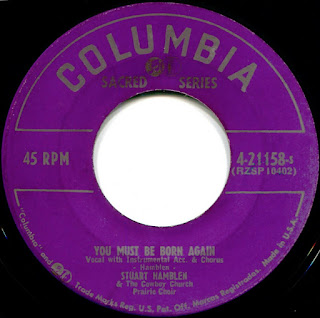 Thanks, Lee - I enjoyed bluegrass gospel, and, like you, admire Stuart Hamblen.

Why do you suppose they put the first three commandments on one tablet, then the other seven on another? Seems like an odd way to divide them up, but maybe there is some precedent that I am unfamiliar with at work here...

Great shares! love gospel and picked up one from Hamblen (which was unheard to me) and same from the lp

Nice to get positive feedback on this AND the terrific Stuart Hamblen single. Wasn't sure how the Earls and Whitehead group would go over, since, despite their very solid musicianship, they're not the expertly produced bluegrass/country gospel of the major label type. The more homegrown groups are just playing for their regular audience--no expert producer is shaping their sound for a wider audience. Nothing wrong with the bluegrass/country gospel of the less rough, major label type--the Chuck Wagon Gang, Louvin and Stanley Brothers are fabulous--but lots of folks aren't quite ready for the no-label stuff. Glad to get the nice feedback. I wondered first thing, too, Ernie, about the division of the commandments. I dunno if that corresponds to/with scripture, or if the artist had simply run out of room and carried them over.... A fascinating mix of paint-by-number and folk, art-wise. Typically, when the jacket art looks like this, there's about an 80 percent chance the music is excellent. Similarly, the more awkward the group photo, the better the music. No so with southern gospel, in which the more professional layouts usually mean better sounds.

If the great Sufi poet Rumi reincarnated as a Nashville troubadour, I could very well see him writing and recording a song like "Partners With The Lord." That Hamblen fellow is one hell of a gospel song writer and singer. I sure hope there's more where this came from--and that it is easily accessed for the sake of the "usuals" like me who visit you daily.

I know I have more Hamblen in my collection, but it's scattered, so by degrees I should be finding it. I don't think I have any other Columbias, but some more of those will hopefully show up in the thrifts--maybe an LP, even. I foolishly passed on a Hamblen LP on the Sacred label at a local Goodwill. I checked back, and it's gone. Actually, my fuzzy memory tells me I have at least a 45 rpm Columbia EP of Stuart, but the trick will be finding it....

My Media Room is a disaster I keep promising myself I'll put in order....

Lee,
Sorry it's taken me this long to comment and thanks for posting! It's a good album and transfer thereof. I found it a while back on Youtube and thought the odd quality issues were from that file, but looks like it's something in the production. Nevertheless, good stuff! I have a preacher friend from Muncie, IN and related to The Earls' and I've sent him the link. Maybe he'll be able to enlighten you on who does what. I find it rather strange/interesting, that there are two different groups a year apart. I asked Glen about it and he doesn't know who the Lead singer on the other album is. He says Edward is the one who did most of the Lead on the other albums, with Leamon (is that how it's spelled) taking the Lead on a few cuts, one of which on a later album you may already have from 1969 (you'll be glad to know) is a Stewart Hamblin number. I also find it interesting, that this group and one of my heroes and his family, the now late Evangelist Billy Mitchell, formerly of Jamestown, TN, swopped songs, such as (not on this album either) Perfect Peace Is Just A Heartbeat Away, The Living Bread (written by L.B. Whitehead), There'll Be A Change (all sung by Brother Mitchell and Family) and It'll Matter But Little At Last (sung by both groups). Of course, Brother Mitchell preached in their area a lot during that time I understand and Edward being a preacher himself, I'd say their paths crossed a lot elsewhere. BTW, there is another group from Muncie, IN that I was gonna send you an album file (flat) of, for an SMG, The Lifeboat Quartet, but too many turntable and album issues. It's a good album in it's own right (not as polished as EWGS), but it just ain't workin' right right now. Thanks and 'til later, love and prayin' for ya!

The Lord works in mysterious ways--the Lifeboat Quartet is about to set sail. I just put the finishing touches on my rip and post for their terrific 1979 "Hymns We Love." It looks like Brent A. Waters is still with us at age 85. I did a Google check.

I'll absorb the rest of your post after I put up the music....

Another one of my Muncie, IN preacher friends, preached in a neighboring church the night of his funeral, then posted the message, that's how I found out of his passing. His son Larry (who was the Banjo picker on the album I have and I assume, does the same on the album you're gonna post), is the Pastor of their church, has been for some time now I'd reckon. Looking forward to this one especially, love and prayin'f ro ya!