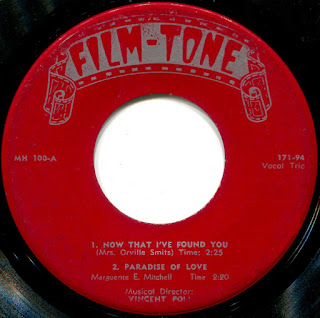 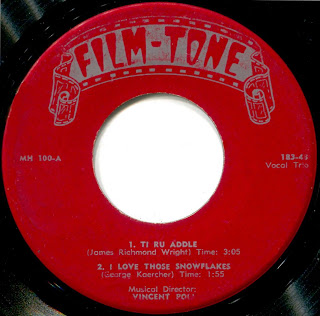 Sorry--too much caffeine.  Anyway, this IS one of the stranger 45s I've ever found in my history of 45-finding.  Normally, I don't look through the 45s at the local St. Vincent de Paul thrift, since there's rarely anything "new," but there appeared to be an extra box this time, so I looked.  And I found some pretty cool stuff, including the pièce de résistance to come--a three-EP set whose cover is a classic in the so-uncool-it's-cool category of covers.  For now, the topic is this Film-Tone EP, one which caught my eye immediately, because... Film-Tone??  If that doesn't say rare (and weird), what does?  And, sure enough, no mention of this disc on line--none I could find--and only one Film-Tone 45 listed anywhere.  Specifically, at 45cat, where they won't allow me to establish a password.  The site has a link that promises a second Film-Tone listing, but nothing happens when I click on it, so....

Film-Tone could well have been a "song poem" label, given the weird composer credits (there are no intermittent beeps, so we know it didn't go with film strips), or it could have simply been a tiny, failed indie.  I wish I could read the name of the musical director--"Vincent Poll"?  It would be possibly be a lot of help, but the letters are too worn to make out for sure.  And the lack of a label address is another road to nowhere.  The two "A" sides are easily explained--that was me, photo-shopping a portion of the A-side label onto the B side, which had a big tear on the left.  So, the second A is actually B.  I did a pretty snazzy substitution job, no?  Well, except for the two As, but who pays attention to that stuff?  Obsessed collectors, yes, but we're just a tiny burp in the U.S. census.

The record could well be from the late 1950s, as I Love Those Snowflakes has a copyright registration date of 1958.  (Thanks, cyberspace.)  That title sounds like the ideal late Christmas or winter song, but it doesn't really work as such, at least for me.  It's just... weird.  Like the rest of the tracks.  The most interesting number, by far, is Ti Ru Addle, a.k.a. Child Ballad 278, The Farmer's Curst Wife, a folk song with umpteen variations/variants, including The Devil and the Ploughman, as collected by Ralph Vaughan Williams.  If you don't know about Child Ballads, click on the link.  As far as I know, Francis James Child, who collected British and Scottish folks ballads, searched for them on site, whereas the possibly more famous Cecil Sharp traveled over here to collect American versions of same.  I inherited a book of Sharp ballads from my foster parents and found the melody used for the 1951 Merv Griffin hit Twenty Three Starlets (And Me), credited to Tom (On Top of Spaghetti) Glazer.  And I'll need to take a break, as I'm suffering weirdness overload.

Okay--I'm back.  Anyway, this super-rare single is performed by "Vocal Trio," who, I'm just guessing, probably partnered with the equally famous "Vocal Stars of Radio and Television with Famous Orchestras."  They sound related. As for the Musical Director credit, I tried "Vincent Poll" (my best guess) in a search, and with no luck.  I did find some kind of litigation that lists a "Vincent Poll Orchestra," but I didn't feel like reading the entire thing.  The "Vincent Poll Orchestra" is used as a hypothetical orchestra name in the ruling, so I saw no point in struggling through a bunch of legal "English," likely for nothing.

I used the line "He carried her to Hell's back door" as my Google search.  Try it--it'll take you to the sources I used.  Put quotes around the phrase, or you'll get fragmented results, as I call them.  Dang, I love weird finds like this!  They make the hunt worth the time and the grimy fingertips.

UPDATE: Bob gave the United States Court of Appeals for the Ninth Circuit document (the appellee's brief, plus the appeal brief, put up in the Internet Archives) a closer look than I did (I had skimmed a bit, then booked), and it contains much (understatement of the year) information about the criminal song poem-style operation associated with the Film-Tone label.  It was a three-stage operation.  With stages within the stages.  You're welcome to read the more than 150 pages in question--why not print them out for more convenient perusing?   Busy blogger than I am, I chose to grab pertinent data and call it a day.  The appeal was not won, though there's an appeal brief by/of the appellant, Mortimer Singer, which splits hairs on a subatomic level--I got a migraine just skimming that portion.  Basically, it was the song-poem scheme of promising naive amateur songwriters a lead sheet, x-number of singles, and a chance to have a hit, though this outfit (which worked through three sub-outfits) seems to have taken the scam to the outer limits, more or less promising a hit, and with publishing royalties, and eager DJs ready to push the record, and the possibility--maybe even probability--that the song or songs would appear in a motion picture (!).  It's the old, old story--the more outrageous the claims, the more likely some folks are going to swallow them whole.  The songwriters were apparently promised a disc (in a set of 100) devoted wholly to their song or songs.  Instead, their creation ended up in EP form, as on this disc.  That was just one of the cheats involved.

The weirdest part of all this was the Madhatters Trio scam--these were the folks credited as "vocal trio" the Film-Tone labels.  Though they were an actual trio, none of the hype in the leaflet below was true.  The MH Trio had not appeared in any movies listed--at least not in the form of the Madhatters Trio--and none of the celebrity endorsements could be confirmed as anything but fake.  I don't know what role this leaflet played in the con job--maybe it was mailed out when people answered the "We will record your songs"-type magazine ads .  Apparently, song submitters were promised a recording of their song by the Madhatters Trio--a record devoted to their song or songs only--and they instead received a non-exclusive two- or four-song EP, with the closest thing to a Madhatters Trio credit being the (I'm not kidding) "MH" prefix in the catalog number.

There are other Madhatters Trio credit discrepancies which relate to the ever-evolving personnel.  Sort of like the average R&B vocal group of the 1950s, the group went through editions.  But it was never anything close to famous.  Not that the marks needed to know that....

This is my page capture of Madhatters Trio leaflet, the exact function of which I'm not sure, though, again, I'm guessing it was mailed to those who took the ad bait.  It's easier to read at the Archives, and I just know you'll be rushing over there.... 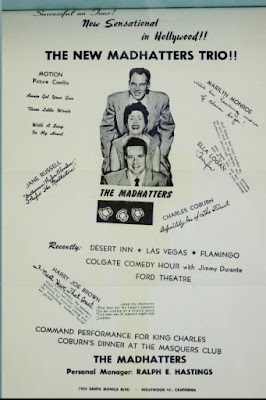 And what looks like "Vincent Poll" on the label is actually Vincent Poli, someone who apparently did not exist.  The orchestra leader was one Elmer Schmidt.  There are more musician details at the Archives, if you simply must know who played behind the "vocal trio," aka MH, aka The Madhatters Ttrio.

Anyway, thanks to Bob for giving this mind-numbing document a closer look.  The brief doesn't actually come out and state that "Vincent Poli" was an alias for Elmer Schmidt; just that Schmidt was the person doing the directing.  There may have been a Vincent Poli, but he wasn't involved in these sessions.  I'm splitting hairs, but I can't help it after skimming this nightmare!  Poli was sort of an alias by default.  These folks just wanted to steal the money of decent but hyper-credulous souls, and they would have credited Adolf Hitler as music director if they could've gotten away with it.

There’s nothing like that feeling you just rescued something from oblivion, is there? Looks like that's what's happened here. Even if I hate this, I appreciate the save Lee.

Thanks. Do you mean that you do hate it, or that you appreciate the audio rescue even if you do? (-: I just find it a kick (is that an expression?) that this oddity contains a version of a famous folk number--one which already has countless variants, as the folklorists like to say. There seem to be a number of current versions of "The Farmer's Curst Wife." I have musician friends who insist that the published (or "sheet music") version of a song, pop or folk, is irrelevant, since most people learn a number by hearing it. Ah, but it has to be stored someplace. Had musicologists not taken the time to collect and notate and/or record numbers like this, we wouldn't have anything like the variety of versions we do have. (Just having an early AM stream-of-consciousness. Sorry!)

I make more sense (hopefully) when I'm fully conscious. I'd like to think so....

Buena música! gracias!
Something in this line, like this... (pardon my french) you can recommand from other posts / entries?

Always buy the weird singles, you never know what's in those grooves! Especially if they're cheap! Words to live by. :)

I give this EP two thumbs up! It leaves me wanting more.

This makes up for the city plow coming by this morning and filling in my path to the street... AGAIN. The berm is up to my shoulders now... actually in reflection the snowflake song doesn't seem so cute anymore... sigh.

A song-poem label as you guessed. I can assure you that "struggling through a bunch of legal "English," will worth your time. Go here :

and you will learn a LOT about Film-Tone, for instance the Vincent Poli real name (Elmer Schmidt)...

Larry, Sorry to hear that. I feel guilty, because we're only getting rain. No snowflakes--just fall-style rain. Glad you enjoyed the record (at first, anyway!).

You're right. That's the piece I found, but I didn't think to put "Film-tone" in the search box. I see that it's "Vincent Poli" and that it's a pseudonym. I will make a note in my post after I've read the entire thing. My bad!! Thanks!

So, it's a scam, but I still like it a lot. Much higher quality than the fake sixties in my opinion. The problem with the fakes is there were some gullible people who thought they were buying the originals for a bargain price. I know of one fifteen year old boy who was bitterly disappointed when he plopped his new record on his RCA portable stereo and wondered why it didn't sound like what he heard on the radio. Growing up is an education...

Larry--True. I like the record a lot, too--especially the 19th century ballad, which artists are still recording today. And I imagine a number of them are taking composer credit, too! (There's a murky area of copyright law regarding arrangements--it's how Harry Simeone managed to steal Katherine Davis' Carol of the Drum and call it the Little Drummer Boy.) I consider the whole song-poem industry harmless, as it gave people a chance to have their songs recorded and pressed. There were even professional musicians who went that route when their careers were on the wane--Bill Indelli was a member of the Tommy Dorsey Orch. and had some songs recorded on legit Chicago labels, and then ended up in the song poem circuit. The problem here is the size of the con--these folks were apparently assured of radio coverage, a possible spot for the song in a movie, and so on. It didn't stop at the vanity-production level.