Grofe and Gershwin on Allegro Royale (1952) 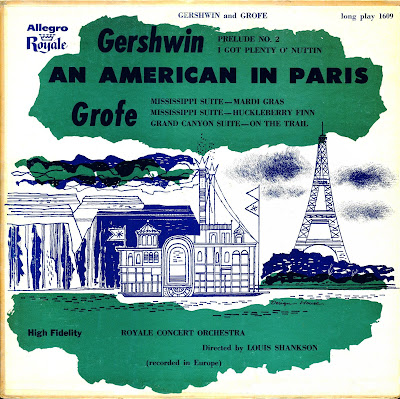 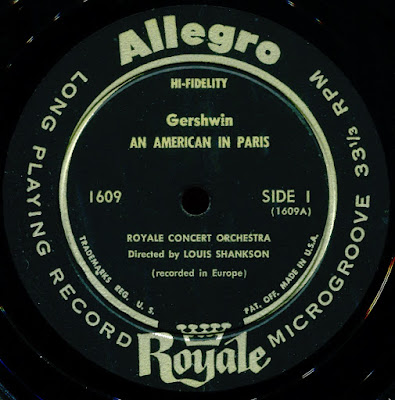 I want everyone to appreciate the work I put into this.  The LP is fairly hammered--its condition can be described as very used--plus it's a product of the junkiest of the junk labels, the Eli Oberstein group.  And it's from 1952, so the recording curve is not compatible with the RIAA curve.  As in, way not compatible.  I ripped it first with the RIAA curve, in case this was a later pressing with an adjusted curve--not.  So I re-ripped with an improvised curve, freeing up the high end and toning down the grossly inflated bass.  Result: infinitely better sound.  Then I reintroduced some bass.  Had to do some tricky manual de-clicking, plus I did a second run-through with the MAGIX de-clicker for the smaller clicks and pops.  The result is acceptable fidelity.  From sonic mush to not-bad sound.

I was going to feature the three Grofe tracks only, but then I figured someone would say, "What about the rest of the album?"  So... I did the whole thing.  And I'm glad, because the music is fun throughout.  Imagine dance band versions of Grofe's Mardi Gras and On the Trail and Gershwin's Prelude No. 2.  Actually, you don't have to imagine them--they're right here.  Jaunty, Freddy Martin-esque renditions for the Grofes.  And how often do we encounter the line "jaunty, Freddy Martin-esque" on line?  I'm betting I'll get zero results.  Let's see.

Yup. "No results found."  I'm original, if nothing else.  The jazzy/corny Mardi Gras arrangement sort of threw me.  Then, once I'd gotten used to the idea of the Mississippi Suite in dance tempo, it was back to the original Mississippi Suite score for Huckleberry Finn.  Then, a dance band-style On the Trail.  Allegro Royale was messing with me.

As for the Gershwin numbers, Prelude No. 2 is orchestrated in a Larry Clinton/Duke Ellington fashion, while I Got Plenty of Nuttin is done in a style true to the opera.  An American in Paris is straight from the original score, and it's very well performed (was there a for-real Louis Shankson") but badly compressed and the victim of third-rate vinyl.  I'm betting the master disc or tape sounded terrific.  Such a shame.  Very enjoyable rendition, however, and more than bearable, sound-wise.  And a quick Google search, which took me to Discogs, suggests Louis Shankson was a made-up-for-the-occasion type of name.  A cheap-label artist who never was.  Yet another one.  I wonder if these guys had a union?

The tracks were ripped Grofe-first, then Gershwin, so the label listing doesn't match my track listing, and vice versa.  At the end of the tracklist, I've put a portion of I Got Plenty of Nuttin as it sounded before I applied the fixes--a "before" glimpse of this fun but ultra-cheap album.

Here's an old article on Allegro-Royale pseudonymns. It doesn't cover this LP, but may be of interest to you anyway.

Good work, Lee! You just never know what you're going to find in those grooves!

I wish i knew how to "work the sound" like you. Good thing you left the untreated part to give us an impressions. Great stuff otherwise! Thanks

A very big thank you. I love these old recordings with the made up names. Something drastically wrong with me, I guess. Thanks for all your work.
Gary

Nice work on this, Lee! I really enjoyed it.

Thanks for the nice words. I wasn't sure, initially, if I could coax decent sound of this--minus curve adjustment, it would have been impossible. I figured the masters were decent, that it was just the usual indifferent sound engineering from this label group.

I'm hooked on the no-name stuff, too. An addiction that's impossible to explain....