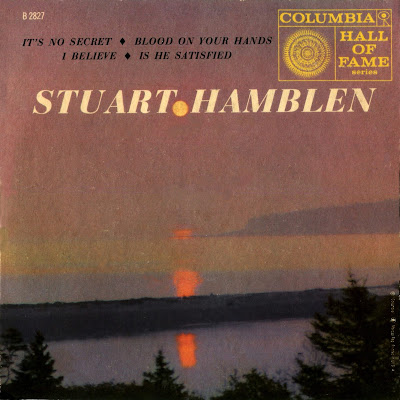 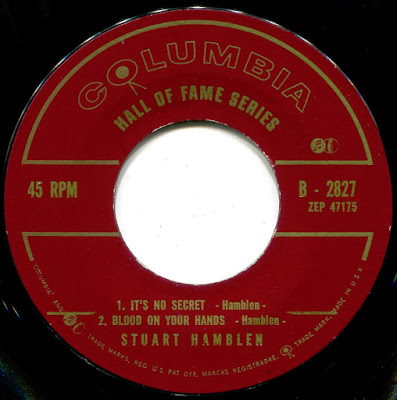 This morning's post was going to be the very down-home duo of Arthur Moore and Judie Woods, who recorded as Art and Judie, and who at some point became Mr. and Mrs. Moore.  The circa-1974 LP was sealed, so my needle was the first one to touch it.  Heard a lot of clunks, thunks, and pops, so I washed the record thoroughly.  It did no good.  Even after going through VinylStudio's de-clicker, the LP had loud thumps, bumps, and the rest.  I gave up trying to remove the noise, as my wrist was starting to fall off around track five, with all the splicing and overlapping I was doing.  I need my wrist for typing, playing the organ, operating the TV remote, and the like, so I quit.  A bad pressing, which isn't a surprise, since it's a tiny label (Rose Records of Vandalia, Ohio), but it was manufactured by Rite Records, and this is the first defective Rite pressing I've encountered.  I just hope, for Art and Julie's sake, the entire batch wasn't like this.

But that is what could have been today's offering, not what is.  What is are four superb Stuart Hamblen tracks from a Columbia Hall of Fame Series EP, put out in 1958.  The tracks themselves come from 1950, 1951, and 1952, and I wonder why it took me so many tries to get the date for the I Believe single?  I had to turn to the Online 78 rpm Discography to get that info, since Discogs and other sources seemed to have no record of the record.  Anyway, Hamblen has done the impossible with that track--he's done a version that I not only like, but which I like a lot.  Lovely sides, and I wish I had more than four to offer this morning.  This guy was terrific.  And passing up that Sacred label Hamblen LP in Goodwill is one of the dumber things I've done lately.  Oh, well.

Posted by Lee Hartsfeld at 8:56 AM

Thanks for this one - I do enjoy Hamblen.

All I know about Hamblen is This Ole House, and I only know that because I grew up with The Statler Brothers version.

I knew Hamblen wrote "The Ole House," but I didn't know he wrote "It's No Secret." It's great to hear him sing it.

Buster--When I saw "I Believe" in the line-up, I thought, uh-oh. Because I've never liked that number in any version. But this one is quite good. Hamblen was the man. Glad you enjoyed--I need to scour my collection, because I know I at least had, any maybe still have, some RCA Stuart.

Ernie--I knew it from my Rosemary Clooney's hit, which was contemporary with Hamblen's own version, which is cooler. I don't remember Clooney's hit first hand--I heard it in the 1980s, when I was educating myself in the pop that came just before r&r. That was the big gap in my pop music knowledge. I had the Stuart version on an uncommon RCA EP that seems to have grown legs and walked out of my collection....

David--Yes, his recording is wonderful, isn't it? That's actually the one number of his that I knew, possibly from my sheet music copy. For a long time, it was the only Hamblen number I could name. Though, as I think of it, I must have also known he wrote and recorded "Open Up Your Heart." And my first memory of "Heart" was when it used to play at the end of "The Flintstones." This was after the Pebbles and Bam Bam characters were created, and there was a single. One of the more bizarre moments from Boomer pop culture....

I posted Hamblen's version of "Open Up Your Heart" years ago, along with a few other Hamblen RCA singles and gospel items from other artists. At the time I wrote, "One of Hamblen's biggest records was not issued under his name - it was 'Open Up Your Heart (and Let the Sunshine In),' a 1955 hit for the Cowboy Church Sunday School, essentially the Hamblen family. Hamblen recorded the song at a very slow tempo, then sped up the master to make his daughter, who sang lead, sound much younger. As an extra added item, the download includes the issued version as well as a pitch-corrected version, so you can hear what it should have sounded like without the manipulation. (The original isn't my transfer and the sound isn't that good.)" I think the link in the post below is still good:

I am sure I have some Hamblen LPs. I'll have to transfer one.

Oh, I do like "It Is No Secret" in whatever version. I am fond of the quasi-religious pop of the time.

I'm kind of weak on the quasi-religious pop of the "He" variety, though I find it very interesting. But Hamblen, I love. He was simply a great songwriter. Oh, and come to think of it, I love "One God," especially as sung by the wonderful Jill Corey.

I didn't know Stuart wasn't present on that disc. I knew it was sped-up. Believe it or not, I did a post about it, too, though I think it's from the "lost" portion of my blog (I saved a lot of posts to disc--per Google instructions--but have no idea how to retrieve them!). I'll check out your post--curious to see what you discovered, pitch-wise. To my ears, the voices sound correct at 33 and 1/3, as if they were recorded at that speed and then played back at 45. At the time, people commented on the improbability of that, since they'd allegedly have been using tape, but it's totally possible they started with a disc rather than tape, and did what my ears sense--namely, go from LP speed to 45 rpm.

I didn't know he had anything to do with Open Up Your Heart... I, too, first encountered that on The Flintstones. Though I do remember my grandmother having a 45 of the song that didn't sound like Pebbles, but I don't remember who it was.

Ernie - It's a simple (and pleasing) tune, so it was frequently sung by kids groups in the mid-50s. I can remember singing it myself, in fact. I imagine it was recorded a number of times.