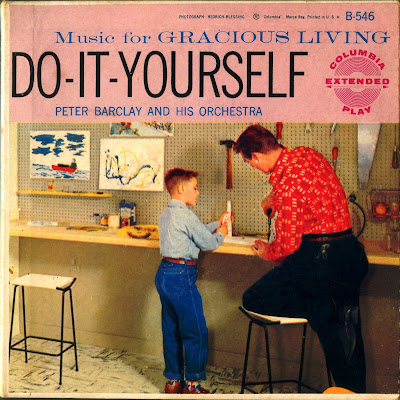 Today's offering is a three-EP set from Columbia's "Music for Gracious Living" series.  It also exists in LP form, as do all the titles in this series.  This site has great scans of the LP covers, though I'm a bit confused by the text.  Quote: "The technicolour cover photographs encapsulate the ideal American family in a wonderfully cheesy/creepy way."  In a creepy way?  How so?  The photos look like ordinary catalog ads of the time.  They show ordinary looking people doing everyday things.  They're obviously posed, but obviously posed doesn't equal creepy.  And their goal is to encapsulate the ideal American family?  Really?  Maybe the cover photos are simply illustrating the theme of each LP.  Personally, I try to avoid reading too much into these things.  I try to do my sociological analysis with some discretion.

Great scans, though.  So, to the important question about today's set--is the music any good?  Absolutely.  It's terrific.  Gorgeous.  And I had a number of excellent puns ready for this write-up--I had them in my head Sunday morning before church, and I was sure I'd remember them, but... they fled.   But I'm sure they would have been memorable.  (They'll come back to me, I'm sure, sometime after I've posted this.)

Yes, this is the kind of mood/easy listening that I love, and the cover is certainly classic.  Maybe an element of camp, but nothing creepy.  Just one thing--I would think that music for do-it-yourself background (did I just type "do-it-yourself background"?) should be lively, and the majority of these tracks aren't.  But that's just me.  A poll of do-it-yourself enthusiasts might reveal that relaxing sounds work best as background for doing it yourself.  I'm not much of a DIYer, so I'm not an authority.  And I doubt the topic comes up for on-line debate very often. "So, fellow DIYers, what kind of background music do you prefer?  From the 1950s, I mean.  No Black Sabbath or Aerosmith."

Some of the songs here go back a ways, even for 1955.  1902's Because, 1910's I'm Falling in Love with Someone, and my favorite of all, 1935's Alone, which made its first appearance in the Marx Brothers' A Night at the Opera.  It's my current earworm.  Nacio Herb Brown doesn't get enough respect, in my view.

If only I could remember those puns.  I had a dynamite intro all worked out in my head, and it's gone.  In my head, then it fled.  But... great easy listening material, and if anyone knows who Peter Barclay was (Ernie suspects that wasn't the leader's real name) or where he came from, please leave a comment.  Otherwise, enjoy the sounds.  Or do both!  To use my one feeble pun, these track really work for me.  (Get it?  Work?)  Sorry.  Guess that doesn't cut it.

The liner notes, which I almost forgot to scan (they're hidden in the fold-out sections), are admirable in their lack of brand promotion.  Well, except maybe for this one little part: "In every modern home there should be a music room, devoted to the enjoyment of Columbia's superb radio, phonograph, and television equipment--to say nothing of Columbia's fabulous library of classical and popular records."  A hint of self-promotion there, I reckon.

See scans for track listing (I had to do six of them!): 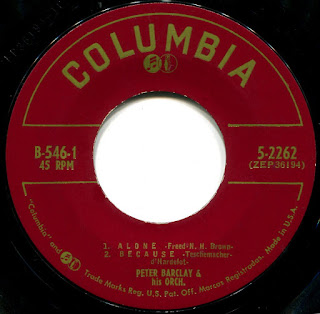 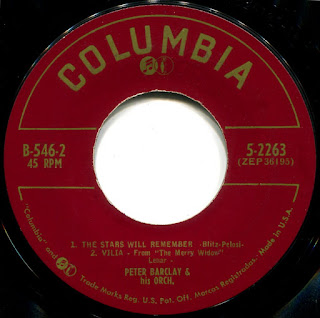 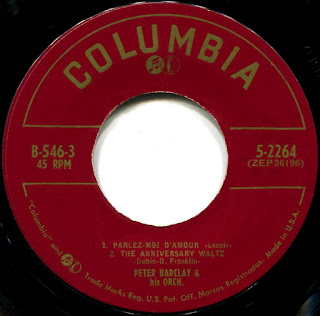 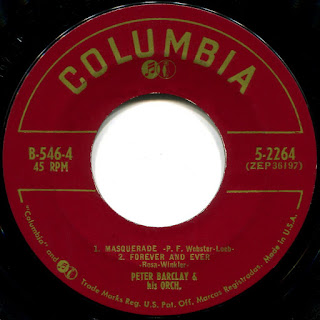 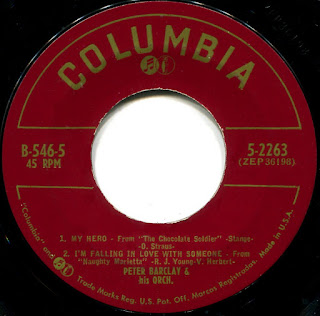 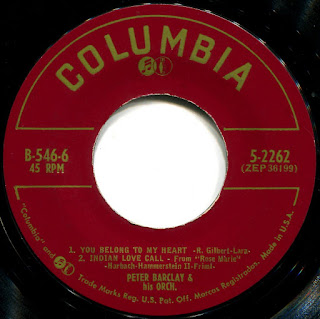 Thanks for sharing, Lee. This set is certainly a rare one, so congrats on finding one in nice shape.

If there was a Peter Barclay, it's very odd that he only ever released the five records in this collection...

Thanks, Lee. I have always wanted to listen to "Indian Love Call" while embarking on a do-it-yourself project!

I've been on hunt for those albums for some time and I had no idea they were issued in EP form as well. Thank you very much for posting them!