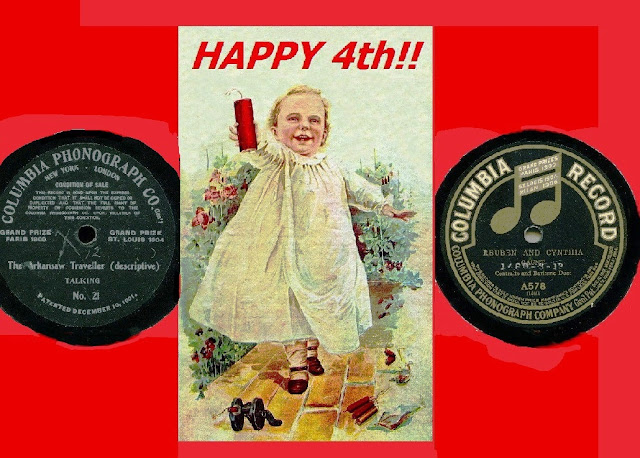 Posted by Lee Hartsfeld at 7:43 PM

Lee, Americans were still of much hardier stock in 1900, and so firecrackers (a bit weaker back then, too) were fairly safe in the hands of a baby. This made for hours of wholesome family entertainment; Papa often rounded out the evening with a box of exploding cigars...

Back to the twenty-first century, though: could you maybe post a photo of Gomez, and update us later on how he's doing? And you may have said how old he is, but I don't remember, so maybe a recat, too -- I mean, a recap.

Thank you for the shellac, and for your USN service as well... and for never having a short fuse. Cheers!

Well, Gomez wandered into our lives in 2007, and I'd guesstimate he was three. So he's about twelve. I'll see if I have a Gomie picture handy--somewhere, there's a disc containing photos from the past 10 years. All I need to do is find it.

I'll do updates on Gomez. Hopefully, he won't need insulin, as neither Bev nor I are the least bit skilled at giving shots to the furry ones.

Lee...don't know if you know of Jim Diamond, the record producer who did the early White Stripes and ran Ghetto Recorders inDetroit until he was forced to close down the studio..but his dad passed away last winter and has a whole load of 78s and 33s from the 30s and 40s...Jim's mom couldn't sell them at the estate sale she had so I told him you might be interested. Problem might be in getting them to you. Email me if you would at all be interested and maybe we can arrange something....we live in Grosse Ile, just south of Detroit, although Jim, himself, is in France right now producing records... rbarban@gmail.com

ps...I'm the guy that shipped you a bunch of religious cassettes for your mom a while back....

Greetings (and thanks again for the cassettes!)--

Thanks for the offer, but unfortunately I have no room in my collection at this point, and I've got too many records, in any event. (-: Much appreciated, and sorry to have to turn it down. Thanks for thinking of me, and good luck moving the collection.