From my collection, four 1916 selections by Don Richardson, the marvelous violinist/fiddler from North Carolina who, though he wasn't the first fiddler to record jigs, reels, and the like for a major label, may have been the first to record entire selections which are so unmistakably in a country/barn dance style.  It's a complicated situation, as country-style fiddle can be heard on discs and cylinders at least as far back as 1900.  Now, rather than try to write a blurb myself, let me refer you to some terrific passages about Don from Play Me Something Quick and Devilish: Old-Time Fiddlers in Missouri, by Howard Wight Marshall: Richardson.
And, also, to this excellent blog piece by historian and country music expert Patrick Huber, who's associated with Archeophone Records' upcoming Before the Big Bang project.

My previous all-Don post was in 2016, before I had my curve-adjusting software, so these rips should sound a lot better.  Since I have multiple copies for several of these, I was able to replace some noisy starting grooves with better-sounding sections--I did this for Mississippi Sawyer and Arkansas Traveler.  A "sawyer," of course, is one who saws.  The word makes for easy dialect-style humor: "Hey, I sawyer sister at the market yesterday!"  Noisy starting grooves on 78s--and they're a fairly common thing--were (as far as I know) caused by tonearm/sound box tracking error.  The farther the gramophone's arm from the center, the greater potential for mistracking, since those arms ran on friction (no anti-skate back then).
With these restorations, my goal was to bring the violin front and center--with the piano nice and clear, too.  That goal took precedence over hiss reduction, though these turned out to be reasonably quiet rips.  In addition to the four 1916 fiddle solos, you'll be hearing Don Richardson's dance orchestra on a 1914 Columbia disc--this starts out the short set.  There's nothing country about the 1914 side (sorry, Wikipedia)--it's early, early dance music.  The versatile Richardson led a dance orchestra and wrote popular songs on top of playing a mean country fiddle.  I imagine that simply his ability to actually read music has the "purists" breaking out in sunspots, and never mind that millions of children start reading music as early as the age of six.  The audacity of a country musician, to have the ability to read music and perform in more than one style!  That's... that's cheating.  Actually, it's called being a performing musician.
Richardson was an amazing player, and the notion of Don as someone who simply performed standard fiddle tunes "as written" is absurd in the light of all the flourishes and moments of improvisation (which typically involve rapid arpeggiating of the melodies) that we hear on these sides.
Next post: Don's 1921 Columbia fiddle sides.  These were a lot of work, and I think it's mostly because this extreme winter has me pretty sluggish (yet, loveable as always). Thanks to Patrick Huber for the i.d. on Richardson's excellent piano accompanist, Philip Hauser Samuel Jospe. Somehow, I was thinking Nat Shilkret, but he's on Victor, not Columbia,  Hello.

DOWNLOAD: Don Richardson 1914 and 1916
(Note: The pianist on the 1916 country sides is Samuel, Jospe, not Philip Hauser (information from Patrick Huber's piece).  Just a little misreading on my part.  The mp3 files have been corrected.  My apologies.) 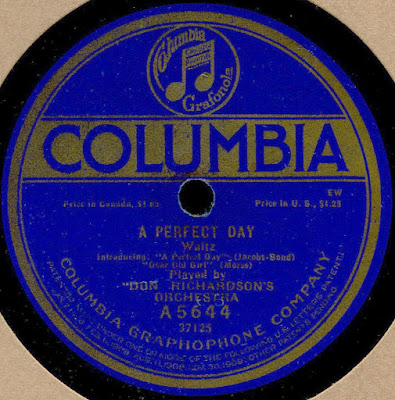 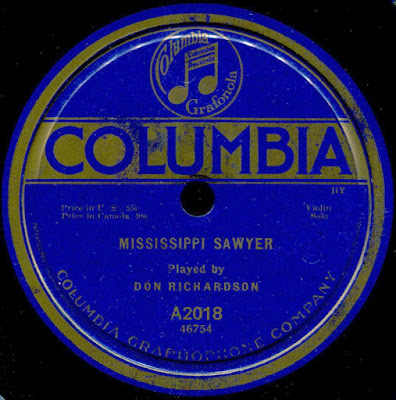 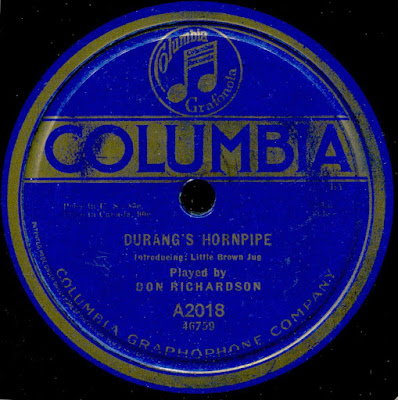 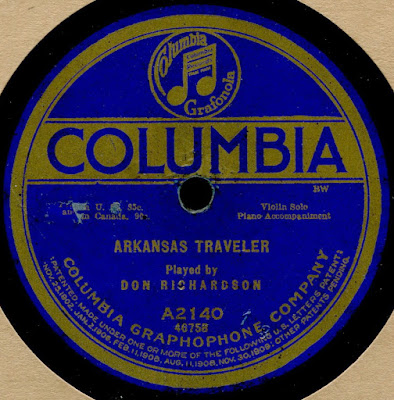 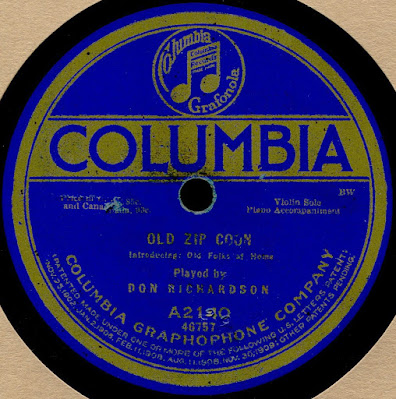 Lee
Posted by Lee Hartsfeld at 9:30 AM

Good stuff, Lee. Love the 100+ year old stuff. Hard to get inside the minds of people so far removed from us, but I'm sure they considered themselves to be just as advanced and progressive as we do today. Imagine suddenly having the ability to record the music you've been playing all your life, what a treat. How do you decide what to record?

Thanks. Do you mean, how did the labels decide what to record? I imagine they went by sheet music sales, picking best-selling tunes. Jigs and reels were very popular, so it was natural that Edison, Columbia, and the others would record medleys of the things. The "Arkansas/Arkansaw Traveler" skit that was recorded a number of times from 1900-on (as opposed to the fiddle tune itself) originated as a vaudeville-style skit on stage, and sometime around the mid-1800s, if I remember correctly. Well, actually, I wasn't there (unless it was in a previous life). In the case of Richardson, Columbia was taking a chance in recording something close to source--the labels were more prone by this time to seek out artists and music, as opposed to relying on the studio guys, as talented as those folks were, and/or readily available local orchestras and soloists. And a certain number of "field" recordings were taking place, and well before we'd imagine, but they were anything but the norm. The labels had their eye on making a buck.

"That feller shor got clever fingers."

I like the way he ends each selection as if the strings suddenly went flying off his instrument.

I wonder if that was some early tradition captured on shellac? Or just a signature thing--Don Richardson's unique way of saying, "That's all, folks!" It sure made for an odd but fun coda.

I've heard a lot of acoustically recorded fiddle/violins records, from Fiddlin' John Carson to Heifetz, but none of their remasterings have brought out the sound of a bow being pulled across the strings like these gems. Great job of audio archeology!

Thank you! That was my goal, to extract all the detail possible (without ruining the sound!). I appreciate the kind review.