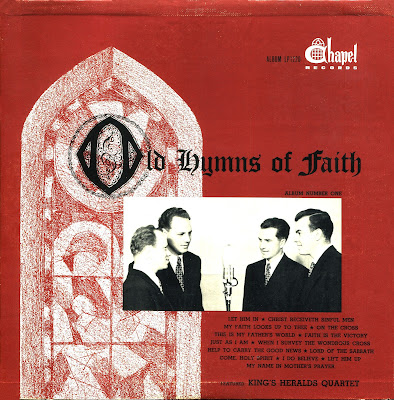 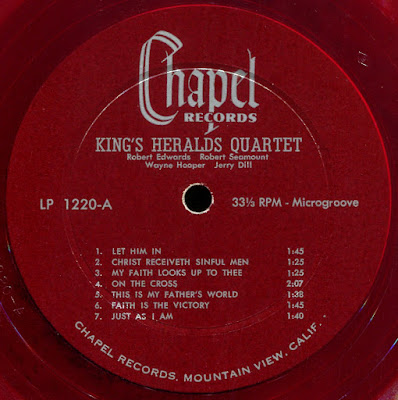 I'd hoped to get this up earlier--as in, this morning.  However, though this 10-inch, clear-red-vinyl thrift gift from Diane (Thanks, Diane!) is in quite good shape for a 10-inch gospel LP from 1953, there were a number of minor clicks which escaped VinylStudio's declicker software (because of its bass-protection feature).  And so they had to be manually removed in MAGIX.  Slightly time-consuming, but worth the time when the music is this good.

The King's Heralds Quartet (aka The King's Heralds) is a superlative singing group which I wrote about last Sunday.  This time, the quartet is augmented by contralto soloist Del Delker.  As far as five-member quartets are concerned, I've always regarded five-part harmony (such as a four-part song or hymn with a descant) as simply an instance of augmented four-part harmony.  The essential texture is the same.  "Four-part harmony with an extra voice" is how I regard vocal quintets, so I don't find any problem with gospel quartets which, for whatever reason, boast five members.  A fifth part is just icing on the four-part cake.  You wanted to know all of that, I'm sure.

And the group manages to present fourteen titles in the space of a 10-inch LP, which is impressive, no matter how it's managed.  And, as before, the singing is radio-quality quartet vocalizing--in other words, the best possible.  Conservative song choice, conservative presentation, but in gospel terms, that's the best of all possible worlds.  (Well, except for modern "praise" music--the less said, the better.)  I was a bit surprised to discover that Help to Carry the Good News by Lewis Edgar Jones (not to be confused with Lewis Ellis Jones of There Is Power in the Blood fame) is from 1911, since it sounded more modern to my ears.  "Modern," as in, the 1940s or 1950s.  Then again, it's consistent in style with gospel numbers of the 1910s by Charles H. Gabriel and Alfred H. Ackley, so...

The quartet is the same as last time: Bob Edwards, first tenor; Bob Seamount, second tenor; Wayne Hooper, baritone; and Jerry Dill, bass.  Plus, Del Delker, contralto soloist.  Masterful performances and excellent early-1950s fidelity, though I would have preferred a greater variety of keys.  But that's a tiny complaint, really...

And great to have a recording of Ira Sankey's 1885 Let Him In, and in such a fine rendition--one of my favorite gospel numbers.  In all, this collection presents a nice balance between "standard" and "gospel" numbers (the latter of the type which used to show up in Sunday School hymnals).  Examples of gospel hymns: Let Him In, I Do Believe, My Name in Mother's Prayer.  Standard hymns: This Is my Father's World, When I Survey the Wondrous Cross, Lord of the Sabbath (And Its Light).

My Faith Looks up to Thee

This Is My Father's World

Faith Is the Victory

Just as I Am

When I survey the Wondrous Cross

Help to Carry the Good News

Lord of the Sabbath

My Name in Mother's Prayer

Nice to see how well those 10-inchers worked out for you (and us!). I'll keep a lookout for more. Thanks!

And thank YOU! So happy to have these two gems, and I still have a 19-inch Singspiration LP to rip. Another gift from you. It's probably a winner, too.

19-inch?! Not sure that would have fit in the box! LOL