Rock 'n Roll--Promenade RR 21 and 22 (with the Promenade Orch. and Chorus) 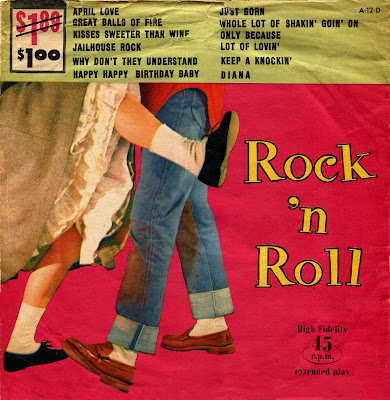 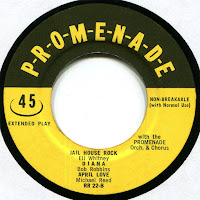 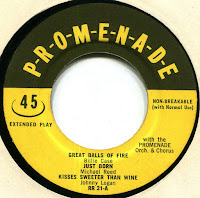 Promenade couldn't make up its mind.  This two-EP release was titled Rock 'n Roll, whereas the following two-EP release was titled Rock n' Roll.  So I guess their budget only allowed for one apostrophe--just pick a side (right or left).  The contraction of and should be 'n', of course, but that knowledge 'n' $1.49 will get you a cup of coffee at McDonald's--if it's open.

For those of you new to these budget-label fake hits, be advised that none of these are the originals (hence, "fake hits," though technically the hits themselves are real enough), even if a few sound vaguely like the performances they ape.  EPs like these featured the big hits of the day/week/month on cheap pressings and typically with as many tracks per side as the company could manage to fit, and who cares if the result was a noisy pressing, even in mint shape.  They didn't care, that's for sure.

Before I forget to mention it, the de-clicking function on my VinylStudio program continues to amaze me--one pass, and all I had to do, mostly, was edit the start and end points.  Had to remove a few noisier pops is all.

The Promenade, Tops, Bravo, etc. EPs typically came with a  paper sleeve, though these show up far less frequently than the discs--I'm lucky in owning a number of these sleeves.  In the case of Promenade, the problem is properly matching sleeves with vinyl, since the numbering systems were very weird, and the sleeve numbers didn't always match what was on the vinyl. Today's offering is a perfect example--the sleeve says "A-12-D," while the labels read RR 21 and RR 22.

I typically store discs and pic sleeves separately, so they become strangers fast.  And so my major project of the moment is to reunite them.

Fake hits also came out as regular singles--i.e., with one track per side--but mostly we're talking about EPs.  It's hard to impossible to make general observations about these labels--they seem to have operated outside of the realm of rules as any rational person defines rules.  The slapdash nature of these copycat operations almost make them seem like maverick operations, but they had no desire to act independently--their survival depended on conforming as rigidly as possible to current recording industry trends, budget (barely) permitting.

Some funny artist credits here--"Little Bobbie" doing Keep a Knockin', The Melon Sisters wishing us a Happy Happy Birthday Baby, Eli Whitney (but he died in 1825!!) giving us Jail House Rock (not be confused with Jailhouse Rock--wait a minute....), The Wright Bros. (oh, please....) flying high with Only Because, and Allan Freed giving us Whole Lot of Shakin' Goin' On.  Actually, it's "Lotta," and the famous DJ was Alan Freed, not Allan Freed, but nice try, Promenade.  Can't say they put no work into their fakery.

Just Born (To Be Your Baby) was a Perry Como hit, by the way.  Only Because was the Platters.  Why Don't They Understand--George Hamilton IV.  Lot of Lovin' is actually Gene Vincent's Lotta Lovin'. The year for this EP, then, is probably 1957.

Now I am addicted to the stuff, so downloading at once. Thanks for this offering from your vinyl plenitude.

I think taking the name of historical figures for your band would reach a peak in the late sixties psychedelic era. Perhaps they took their inspiration from these budget labels? Maybe...

I wanted to hear Keep a Knockin' in particular, because who can imitate the inimitable Little Richard? Little Bobbie is better than I expected!

And, of course, I just checked to see if LR is still with us. Yes! At 85. I remember the fist time I heard LR singing gospel, and I said, "Hey, he really CAN sing!" And my foster father John said, "Of course he can."

I am 69, so I remember when Elvis et al came on the scene. I never liked the King when I was a Kid. I preferred the pop pap that rock 'n' roll replaced. But I did make an exception for Jerry Lee Lewis and Little Richard. Richard's "woooo" was a thing of wonder to young Buster. Still is. Little Bobbie does it well, but his timing there and elsewhere is just a bit off.

I was wondering while listening - is "Diana" the first and only Canadian calypso record?

Ha! I never thought of that. I have no idea!

Byron! Hi! How are you doing? Great to hear from you.

Didn't Little Richard get his Woooo from Esquirita? Or Eskew Reeder, or whoever he was. That's the story I heard, and you can hear a lot of that same thing in his music. I suppose everything has to come from somewhere. :)

Esquerita (hard to Google!)--and he didn't record until 1958. Based on what (little) I've read about E. and Little Richard, it's not completely clear how much of Esquerita made its way into LR's style--accounts vary. Did Richard learn E.'s banging boogie-woogie chords from E. or did he learn E.'s gospel piano? Not clear. But I've heard pre-PR recordings by Billy Wright that sound a lot like LR.

Esquerita's piano playing bugs me. It's wild in a way I love, but he has trouble hitting the chords he's aiming for, at least on the examples I've heard.

Naturally, Little Richard sounded like other artists in his field--every field has to conform to pretty rigid conventions, since any significant deviation from those conventions would be death to the form. "Influence" becomes an issue when it's, say, young British guys newly hearing American R&B and rock and going "Wow!' and incorporating the sound into their gigs.

What great stuff, in a totally demented way. The performer names alone are a treat. Thanks for posting all the fake hits that you have. Love them.
Gary

Glad you're enjoying! Sixteen more are on their way--same label (Promenade). Thanks to a vastly superior de-clicking filter on a program I had been using solely for adjusting response curves, I'm now getting posts like this one finished in (no pun intended) record time. I was able to rip, filter, and edit the sixteen upcoming tracks in a single sitting. I'm almost feeling irrelevant to the whole process....

Hey, I have noticed that a lot of these fake hit posts have a lot of the same songs, do you have anything Fake hit wise from say 1960 or later? Do you have any Beatles cover records... those are interesting.

Yes, and yes. I have Tops, Bravo, Promenade etc. versions of Will You Love Me Tomorrow, It's Now or Never, Stuck on You, Puppy Love, The Twist, Theme from the Apartment, The Stripper, Palisades Park, Barbara Ann, Venus in Blue Jeans, Duke of Earl, Put Your Head on My Shoulder, Keep Your Hands Off My Baby....

And I have any number of fake Beatles hits, especially on the Hit Parader and Song Hits EPs, but also on budget LPs. Also, the Hit label 45s, Columbia Record Club LPs, and a British label the name of which I forget. It's called "Beatlemania," and the group sounds uncannily like the real thing. The label is Top 6, or something like that?

Lots of fake British Invasion, Beach Boys, Four Seasons... I even have a fake version of "Surfin' Safari." Worst of the fake Beach Boys bunch would have the be the abominable attempt at "Good Vibrations" that showed up on Hurrah! and at least one other label.

Yup, I've got the stuff.

Elvis record of "Jailhouse Rock" drives me crazy because of Scotty Moore's eighth notes against D.J. Fontana's swing on the chorus. Maybe it's just me. But, I've been listening to other recordings of the song, and some of them are quite satisfying. This post looks promising! Can you be persuaded to restore the link?
Thanks!
Zoomer

Some polymeter happening on "Jailhouse"! Yes, let me see if I can find the original zip--it should be on my hard drive.

New link is up. Enjoy!