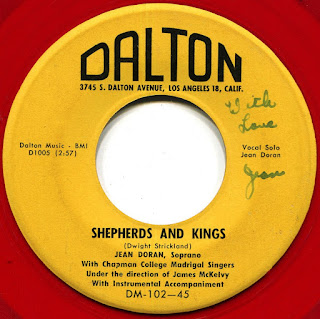 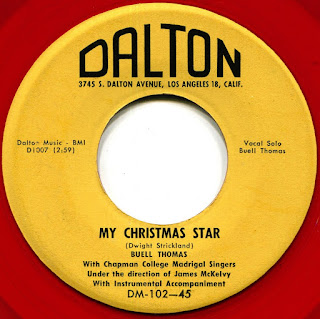 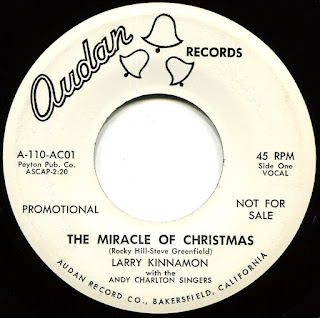 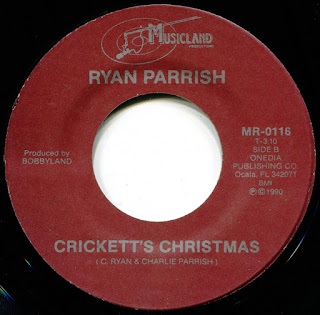 Well, Not all of these are singles.  Actually, only four singles were played in the production of this playlist.  When I'm ripping individual tracks from LPs, I call them "singles," as in single selections, I guess.  I don't know how my mind works.  Anyway....

The Trapp Family Singers, of course, were the subject of the apparently highly fictionalized The Sound of Music.  These TFS selections are from what I deem to be a reissue of their 1953 LP, Christmas with the Trapp Family Singers (Decca DL 9553).  Carol of the Drum, as ever, is the 1941 Katherine K. Davis song stolen in the late 1950s and retitled The Little Drummer Boy--as far as I know, this was the first-ever recording.  It really zips along, and it's the only arrangement I've heard which features three parts instead of two for the female voices.  I've ripped four other selections from this wonderful album, all superb.

Next, and from an actual single, we have Jim (Green Door) Lowe performing two of his own compositions, Santa Claus Rides a Strawberry Roan and Prince of Peace.  Then Carol of the Drum returns, this time by St. Patrick's Cathedral Choir, and from a an actual single.  (I don't tolerate fakes.)  The single and LP came out in 1959, according to every source I've found, but the label says 1958, and I put 1957 on the 45 sleeve, meaning I may have discovered recording-year info at one time that places it at 1957.  If I did, I didn't make notes.  So 1959 it is, with the label telling 1958.  I hope that's clear as crystal.  Two more singles--Larry Kinnamon singing The Miracle of Christmas and Ho-Ho, the latter by Larry himself.  I found no year for this 45 on line, though I found listings for other singles on the same label (Audan), including titles by the Gaylads and Lavinia Lee.  Our single looks to be from about 1961.  You would think, as I did, that Ho-Ho, being the flip side of The Miracle of Christmas, would be about Santa Claus, or at least about the holiday.  Nope.

No year for the Dalton label single featuring Buell Thomas (My Christmas Star) and Jean Doran (Shepherds and Kings), though I'm guessing 1960-ish.  I really like Shepherds and Kings, despite some awkward lyrics, and you'll notice the label was signed by Jean Doran herself.  I like Jean's voice, too, which is very good, though with a slightly weird edge.  But weird is good.  Everyone doesn't have to sound the same.  If we all sounded the same, then we'd... we'd all sound the same.  So there.

One more actual single to come, but first, selections from the superb 1957 Word LP, The Moody Chorale, which feaures... the Moody Chorale.  Coincidence?  The chorale gives us our third Carol of the Drum version, and, like the Trapp Family's, this is pre-1958, and therefore pre-theft.  The best of the three Moody tracks, though, is Handel's And the Glory of the Lord, from (you guessed it) Messiah.  Then three album tracks, the Urania label's 1957-ish Silent Night, featuring Barron Smith at the John Wanamaker Organ in Philadelphia.  Specifically, "the mammoth Wanamaker organ installed in the beautiful and specious Grand Court of the John Wanamaker store in Philadelphia"--Back jacket notes.  Fidelity is superb, and we have our yearly repeat of Ferde Grofe's charming 1934 Christmas Eve.  Here's the Christmas Eve run-down, scanned from the jacket:

Christmas Eve shows up on Youtube, and the poster gives this LP a year of 1956.  Highly possible.

The St. Patrick's Cathedral Choir returns with Carol of the Bells, and the sackful of singles and single selections runs out with Ryan Parrish's Crickett's Christmas.  Crickett is a hound who runs the reindeer--makes them go.  I don't know enough about dogs to know exactly what that means, but I always thought Santa's team was as motivated as any team could be, especially with Rudolph in the lead.  Why is Crickett needed?  And this could get into an ugly chain-of-causation deal, with another character required to get Crickett going, and a character required to get it going, and so on.  "Roll, roll, roll 'em on, Cricket, over the pines and the fields and the swamps and the thickets; Lots of toys for the good little girls and boys; Roll 'em on."  I'm sure Rudolph sometimes wishes he'd never been added to the Santa Claus narrative--new characters are showing up in town every week, itching to outdraw Rudy.  What on earth am I talking about?  To the music....

Wow! So many goodies in Santa's sack today! Thank you, Santa Lee!

Yeah, it will all devolve until a cricket named Dog appears in the narrative.

Thanks for the collection!

But -- were any singles injured in the production of this playlist?

Hope you're pleased by the tracks. The lyrics to "Crikett's Christmas" are almost nonlinear. And it's basically a rewrite of its flip side, only with a Christmas theme tacked on. Weird record!

You got my reference! The allusion, I guess would be the right word. I was hoping someone would catch that. Thanks!

I'm glad that you put the original Carol Of the Drum in here...

What I have to say about the Ornoroti/Simeone ripoff I would be receiving fruitcakes for life if I ever posted them...

I hear you! Yes, it's important to keep the original versions out there. As you know, I'm sure, a number of folks recorded "Carol of the Drum" before Simeone decided it was his. I can't fathom how he got away with that. I don't disagree with the copyrighting of a specific arrangement of a song, but arrangements are not songs. And I can't hear that Simeone did anything different with it. It's all there: "Pum, pum...." "Come, they told me..."
Same words, same melody. So much of pop music history is told in stories that hinge on micro-technicalities. An extra voice, a different style banjo, a piano/no piano, one market vs. another, etc. Absurd. If I recall correctly from my Googling, Davis sued Simeone and his arranger (and, apparently, Simeone's version was based on the Jack Halloran recording) and she ended up with partial credit--for her own song! Why that kind of thing is allowed is beyond me.

Wikipedia's failure to set the record straight is disgraceful but internet-typical. Wikipedia bows to popular wisdom, which means it places no value on the truth.