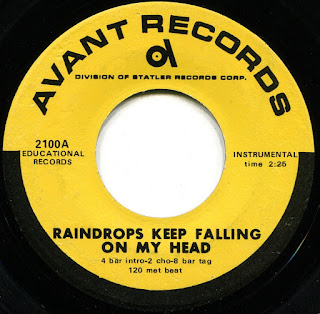 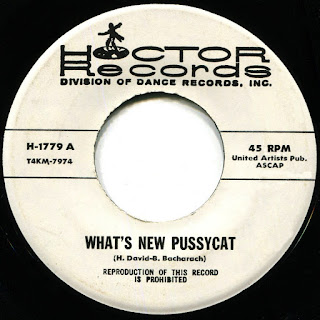 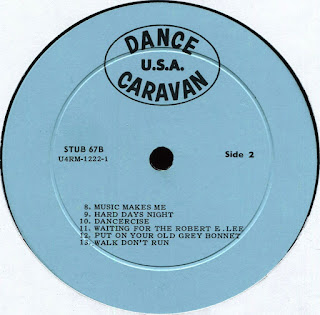 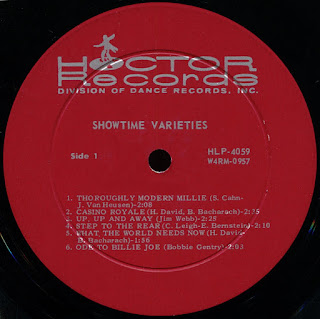 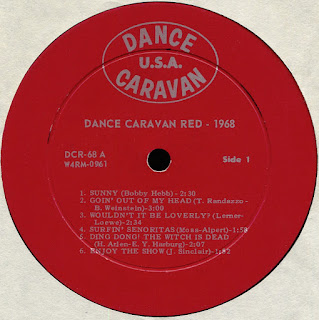 The good news is that my MAGIX software is working fine now--like magic, almost!  It took at least two re-downloads of the program, but it's hanging in there with no problems.  I have it on permanent download at Amazon, but A. must have gotten suspicious, because the last time around I had to do a fresh sign-in.  It was one of those, "Are you sure you're really you?" type of verifications.  Yes, I'm sure I'm actually me.  Almost sure, anyway.  The cause for all the MAGIX issues?  My best and only guess would be lost or corrupted files.  I just had to keep installing it until the whole thing took.  Without any errors.  That's where my technical understanding ends.

So, tonight I was ripping a bunch of Hit Records singles, and then I remembered an earlier batch of fake-1960s rips I'd made but never posted, for some reason.  Tracks from dance class LPs and singles, mostly on Statler Records or its sub-labels (Avant and Dance U.S.A. Caravan).  Also, some Hoctor Records material.  I looked in the music folder from my previous PC, and there they were!  Two big zip files of stuff.

Now you get to hear them.  Nothing much to point out, music-wise, save that everything is instrumental and that the arranging styles vary from big band to something closer to the original recordings.  And every place in between.  The musicianship and arranging are studio-level, and the tracks are a lot of fun.  Not knowing quite what stylistic approach to expect from title to title makes things more interesting.  And I couldn't have picked a cooler first selection--a treatment of A Hard Day's Night that utilizes the famous Batman riff.  Statler Records treated titles and credits very casually (the latter, by not listing them), and so A Hard Day's Night is shown on its label as Hard Days Night.  As you can see by the scans, Hoctor was more professional, both in look and in getting the titles right.  And including credits.  Er, no, I take that back.  I just glanced at a credit from the Hoctor Dance Carousel LP: Kind of Hush.  I guess There's Kind of a Hush was too many words.  Both outfits were pretty casual and careless.

Not so the dance teacher/teachers who owned these--there's nary a crosscut or needle crop mark, and I doubt the teachers were using state of the art hi-fi sets, so congratulations to them.  I love discovering that someone took good care of his or her vinyl.

Most of these showed up at the same time in the local St. Vincent de Paul thrift store, all separated from their jackets, most of which I was able to eventually locate in the piles and stacks, but all of which were too musty-smelling to save, even after weeks of airing out.  The record labels, however, lost their odor pretty quickly, and of course the vinyl was easily saved by simple cleaning.  Neither retained their stored-too-long-in-the-damp-garage smell.  On that pleasant note....

Boy, do I have a playlist to type out.  Two, actually.  The credits are a mess.  This is because, in many instances, even with the jacket info, the collection tiles and numbers made little sense.  A number of these LPs were part of a larger package, with extra printed material--hence, the confusion.  Others appear to have been stand-alone issues.  I did my best.