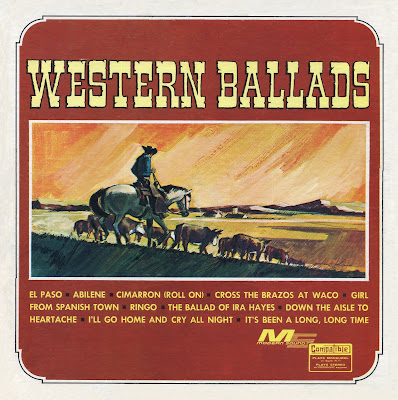 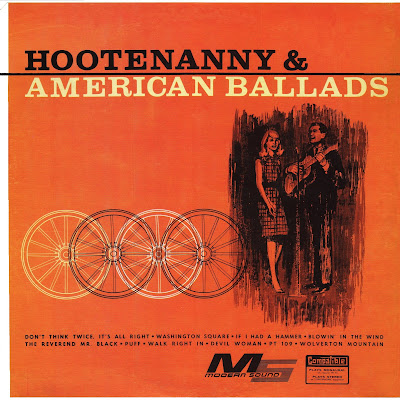 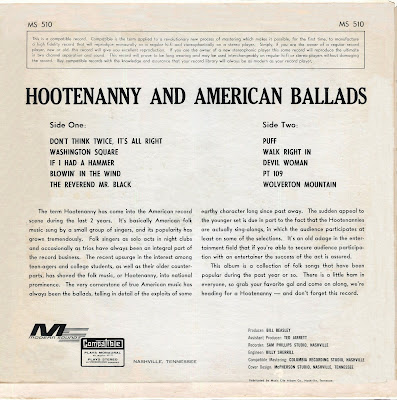 As you can see, Hootenanny and American Ballads (second LP down) had one of those mostly white back covers that don't clean up well with photo software.  The front jacket, however, is gorgeous and would have looked gorgeous even without the cloning and cropping.  (Isn't that the name of a rap act?)  Gorgeous jacket, trashed disc--so I gave it the VinylStudio treatment, then removed a lot of noise manually on MAGIX, and then summed the stereo to mono.  Result: decent sound, if a little bass-heavy in spots.  But, on their jacket blurbs, Modern Sound (Hit Records) insisted that their records were set up for stereo and/or mono reproduction, so I can only assume the heavy bass was intended.  I've been told that LPs from this era, which sold primarily to folks with cheap stereos (we're not counting the audiophiles and their Prokofiev LPs), were EQ'd to sound best on those stereos.  So that could explain the loud bass, since portable units didn't have much lower end to start with.

The real question is, what the heck was/is a hootenanny?  No, not a goat crossed with an owl.  And not a barn dance--or not necessarily.  Could be, in some cases, I reckon.  Anyway, Wikipedia's entry reads as follows.  I like the mix aspect of this LP, because I doubt that folk gatherings of this type were ever totally political--political stuff was part of the Hootenanny scene, but the main emphasis was on the music of the people.  And "the people" were defined as the downtrodden, the poor, the outsiders, the forgotten, the non-WASPs.  I have a pop culture degree, and so I think of "the people" as everyone, not some select class, and I include the dreaded mother/father/kids/dog/saving-for-a-college-education/family-car set.  Ordinary, everyday middle-class folk.  But the classic "the people" construct is an elitist notion straight out of the academic world, where elitist concepts thrive.  "The people" are the real people.  Which means, I guess, that he rest of us are fake.  You thought you were legit, but I've got news for you.  That reflection you see in the mirror?  A fake construct created by your fake brain.

Anyway, I suspect Wiki's take on "hootenanny" leaves some things to be desired, as do nearly all of their entries that deal with cultural stuff.  No time, at the moment, to delve into the topic.  Modern Sound itself tells us in the liner notes, "The term Hootenanny has come into the American record scene during the last 2 years.  It's basically American folk music sung by a small group of singers, and it's (sic) popularity has grown tremendously."  And even Modern Sound takes the elitist angle: "The very cornerstone of true American music has always been the ballads, telling in detail of the exploits of some earthy character long since past (sic) away."  Earthy character?  Anyway, how about the "true American music" bit?  True American music about true, crude, coarse people.  Real folk--not briefcase-carrying, PC-using, shopping-at-Kroger facsimiles like you and me.  Of course, the performances being copied here were waxed in modern, state of the art studios by the popular country and folk singers of the time--Jimmy Dean, Bob Dylan, Claude King, and so on.  I imagine Modern Sound lacked the budget to track down and record earthy people singing true American music, so we can cut them some slack.  At least they give us some actual liner notes here instead of the usual junk-label pledge of quality.

Sarcastic carping aside, Modern Sound scored a win with this one--cool set, except for the majorly out of place PT 109 and the anything-but-singalong Puff, which makes me sadder than heck every time I listen to it.  A toy dragon that dies of loneliness after his owner matures and moves on to other toys--ouch.  (Wiki, however, reports an extra line that was written but not added, in which Puff is rescued from loneliness.)  The legend will likely continue forever that the song is about drugs, though one of the two men behind the number--either Leonard Lipton or Peter Yarrow (can't remember which)--said that, had he meant to write a song about marijuana, he'd have written a song about marijuana.  Anyway, here we have a document of that brief period in pop music history when country, pop-folk, and whatever were bunched under the "Hootenanny" tag, if only because people were lost for another term.

Western Ballads just struck me as hilarious from the moment I spotted in the Goodwill bin.  It's one step up from Record (One Each) in terms of its faceless quality.  Customer: "Do you have any western ballads?"  Clerk: "Western ballads?  Let me see.  Um....  Oh, yes.  Here."  Customer: "Thanks."  Disc was in fine shape, despite the cruddy vinyl, so I was able to keep it in stereo.  Despite the title, these are pop-country sides plus one novelty--a side I remember from its endless AM radios plays--Ringo.  Nothing to do with the drummer, of course.  Here, Lorne Greene is imitated by someone with a radically bass bass voice, poor enunciation, and a robotic tone, and the track is so out of place, stylistically, with the rest of the LP, you have to wonder if this issue was intended as a Ringo exploitation item.  Except, if so, they would surely have put Ringo in huge font on the cover, and they didn't.  So... dunno.  Abilene, The Ballad of Ira Hayes, Cimarron (Roll On), and... Ringo??  At any rate, "Shot from behind, I thought he was dead" remains one of the all-time pop-lyric dangling participles--it's Ringo who was shot from behind, not the singer.  However, a fake Ringo in stereo, so I can't complain, though it's unfortunate that this superior set had to be the bashed-up one.  But I was able to save it.  Apologies on El Paso--kind of bad timing on that one.  It hadn't even occurred to me as I was ripping these.  Maybe I should have axed it, but it's still right there in the jacket scan.

I forgot to do label scans--sorry.  But you're not missing anything....


Don't Think Twice, It's All Right
Washington Square
If I Had a Hammer
Blowin' in the Wind
The Reverend Mr. Black
Puff
Walk Right In
Devil Woman
PT 109
Wolverton Mountain

Wolverton Mountain was a country tune (although it was a pop hit as well) and wouldn't have been in the repertoire of the clean-cut folk singers and groups I recall. That said, there were some folk artists who had a country background, such Ian and Sylvia.

Hey, Lee! Just to ease your troublin' mind, "El Paso" has never had anything to do with real life around here. Granted, local boys have been shot for fooling around with other guys' girls, but that's universal. There IS (or was) a Rosa's Cantina, but it came after the fact, to cash in on the record. And Felina? Something related to cats, one supposes. In my bar-band days, we could serve up the song on a tourist's request, provided they tipped well or bought us a round. Marty Robbins' B-Western set to music is just that. The bridge is catchy, though. Carry on!
Zoom.

Those western ballads are a hoot!
(Sorry, couldn't resist.)

Thank you for your work on these albums and for sharing them. I have many fond memories of my Dad singing these songs on road trips. It’s magical the forgotten memories that came alive with the help of the Reverend Mr. Black.

Hootenanny was the title of a television show on ABC that featured folk singers. Therefore, a gathering of folk music groups has become known over the years by that name. Modern Sound albums consisted of Hit Records of Nashville sound-a-likes, but occasionally if they didn't have enough actual folk songs for a album, they would fill with similar sounding country sound-a-likes. Both are excellent albums.