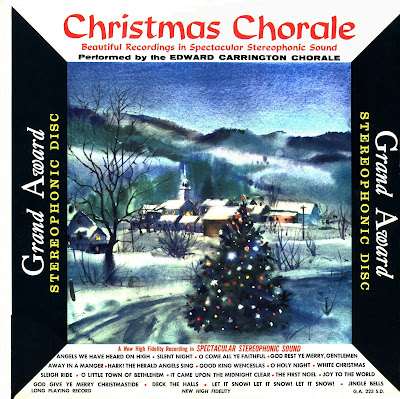 I didn't expect to be doing a late Christmas post, but here I am, making a late Christmas post.  It's kind of fun!  Ernie put up the mono version of this LP ("A Reshared Rarity"), describing it as uncommon--and I have no reason to doubt Ernie's word, given all the Xmas vinyl he has seen and posted.  I post a decent amount of holiday stuff myself, and it's new to me, too.  At any rate, since Ernie had posted his copy, I didn't post mine during the holiday(s).  Ahhh, but then I realized I have the stereo version of the LP.  That was the game changer, as they say.  Whoever they are.

I told Ernie about my stereo copy, and he asked me to put it up.  So here it is.  The LP's condition could be better, but it's in mostly decent shape.  Acceptably decent, reasonably not bad shape.  I suspect someone played this with an expired needle at one point--it has that kind of wear.  Nothing that hurts the ear to hear, anyway, and the stereo sound is very, very nice.  Specifically, nice and full.  A number of the tracks sounded familiar, and I discovered there's a good deal of crossover with my Crystal Studio Choir post of this year.  My Crystal Choir LP (isn't that one of the most false-sounding group names in vinyl history?) is on the Audition label, which is part of the Grand Award family. so... that explains the cheat.  The tip-off track was Sleigh Ride.  Then I compared some others.  My LP is an abbreviated version of this, with thinner stereo.  As junk labels go, the G.A. stable of labels was more in the semi-junk category--beautifully produced, with good, often excellent, sound.  But the group had all the usual junk-label attributes, too--second-rate vinyl, re-namings of groups and issues (to get multiple sales for the same material, of course), and a line of "fake" hits ("18 Top Hits," anyone?). And this label group is probably responsible for the annoyingly persistent popular misconception that the junk labels had trouble capturing the sound of rock and roll, the idea being that, because the labels were using professional/traditional/establishment/old-timer musicians, these studio pros were confounded by the "new" rhythms.  An ancient meme by now.  That notion is absurd on a number of counts--for one thing, big band-era musicians had been playing rock-style rhythms for years as part of big band (where do people think the rhythms came from?), AND r&r, as I'm always pointing out, hardly started with Elvis--there are records from the 1940s that rock Elvis off the stand--and the needle out of his grooves.  (Nothing against Elvis, who I love!)  Most of these '40s discs were black, but they were derived from jazz, so....  But the Grand Award label stable, maybe because Enoch Light wasn't fond of rock and roll (or, like many folks, thought it was a soon-to-be-finished fad), at first (1955-56) produced "fakes" that sounded much more like the traditional pop of the day (or even earlier) than real rock and roll.  And so this feeds into a popular myth, and... there we are.  I don't think Enoch Light knew he was contributing in advance to a rock-culture misconception.  However, we're here to talk about Sleigh Ride and God Rest Ye Merry, not At the Hop, though I don't think anyone was resting at the hop, though they were making merry.  By the way, Snopes reports that "rest" had a meaning of "remain" or "stay."  As in, keep on being merry, gentlemen.  It was addressed to gentlemen.  Non-gentlemen had no requirements along that line.  Ladies, as usual, aren't mentioned.  Maybe merry-making was a guy-only thing, once upon a time.

Nice stereo sound.  You'll hear the needle-damaged portions, but nothing hideously bad in the audio department (third floor, next to the legit labels).  If this is rare in mono, it's likely moreso in stereo.  I think this turned up for me in Columbus, Ohio, but I don't keep a log of where and when I find things (I often wish I did), so it could have been the Goodwill off Dry Creek Road.  The story has been consumed by time.  For all I know, it showed up in the shed, one day, as if out of nowhere.  "Hey, cool--a Christmas LP.  Wonder where it came from.  Doesn't matter, I guess." 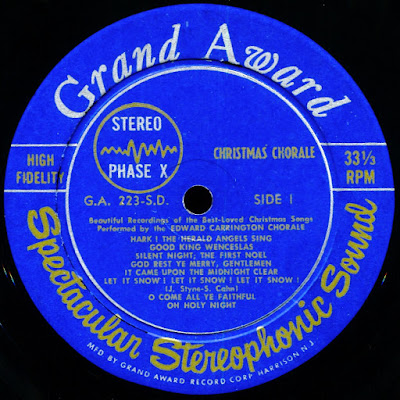 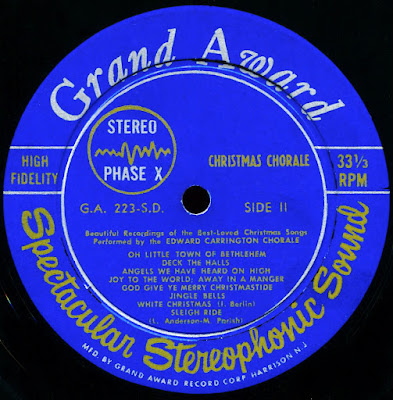 Wow! So I guess the stereo version does exist! I thought maybe it was just the figment of someone's imagination on DISCOGs. To be honest, never one of my favorite shares, but someone had mentioned it in an email so I threw it back up. Be sure you go over to my blog and leave a comment on it, pointing folks over to your share. :)

Hm. The jacket is gone, too. Now my desk is disappearing! What's happening?

i GET THE SENSE...cough, cough, pardon me, gotta clear my throat here. I get the sense that as Enoch Light's career moved forward, he had more and more control over his own recordings. You don't see this kind of re-use and repackaging of tracks from him command or Third 3 recordings. Waldorf stuff was all over the place, and as you've shown here, so was Grand Award.