Happy Easter!--Recordings from 1908 to the age of vinyl 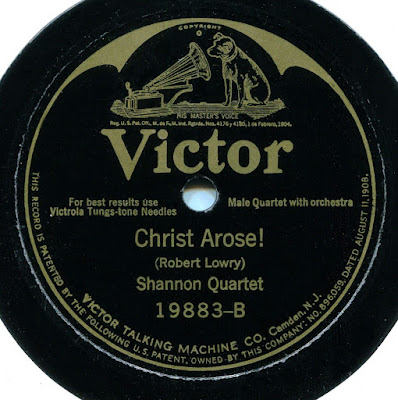 Well, that title sure sounds fancy, no?  "From 1908 to the age of vinyl."  That would go great with an echo chamber.

So, since I'm a liberal, I'm not supposed to notice that Google routinely ignores hugely popular Christian holidays such as (oh, for example) Easter--the news media labels all such observations as right-wing in nature, though that doesn't seem reasonable.  But, I mean, Easter happens to be big in 95 countries across the planet, with many or most of them making it a Monday public holiday.  So why would Google treat a worldwide event as... nothing?  I think the current answer from Google is that it chooses not to honor any religious holiday, though of course it won't say why.  (Did someone say "PC"?)  I do recall, a while back, reading a lame statement from Google in which the age-old SMC (somebody might complain) excuse was hauled out.  The SMC excuse usually includes some version of "they'll complain if we do, and complain if we don't."  Really?  Google is, like, the hugest internet company out there, and it can't field complaints?  An entity that doesn't seem all that concerned in the first place about what people think?  "Oh, no--Google just crashed!  Oh, my God--it's finished!  It's closing its doors.  It's done.  Somebody complained!!!"  We'd better be careful.

Today's Google doodle, which isn't showing up on my home page (which goes to Google) honors Senegal Independence Day 2021.  Now, Easter is celebrated in Senegal, which means that, in a very strained sense, Google is acknowledging Easter.  That should be enough for us, I guess.

Meanwhile, I have Easter hymns for you.  I should have gotten these posted much earlier, but I've just been... out of it.  More accurately, my sinuses have been out of it.  Pollen is high today.  I have no idea why, and it seems a little too early in the season, but I just visited a pollen-count website--and my sinuses never lie, anyway.  If they have, they've never been caught.

All 78s ripped from copies in my collection.  The Mennonite tracks are from an excellent mono LP gifted to the blog by Diane.  (Thanks, Diane!)  And you've got to love the old-fashioned close harmony of the Whitney Brothers Quartet.  Well, you don't have to, but you should.  Just a suggestion.  And I'm not totally sure why Old Rugged Cross is an Easter hymn, but any number of sources identify it as such.  I think of it more as a Good Friday number, but I suppose it works for Easter. 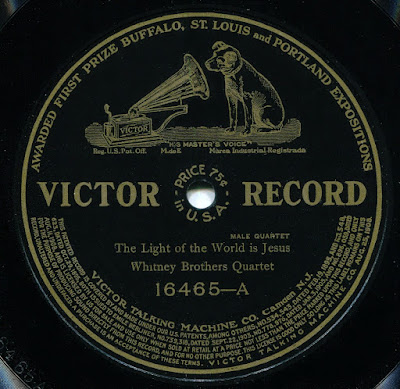 Posted by Lee Hartsfeld at 4:24 PM

Another great collection Lee, much appreciated.

My pleasure! Thanks for the nice words.

Thanks, Lee! Happy Easter to you!! Hope the bunny brought you some good eggs. Never question where a rabbit gets eggs, though... You might not like the answer.

Thanks for the thanks, Lee. Always happy to provide fodder for the world's best music restoration blog!

Those Shannons could sing anything!

I went back to many of your prior gospel posts in search of Homer Rodeheaver. Bryan Wright ended his latest broadcast with "Jesus, Rose of Sharon," and I found that you had uploaded it. Could you upload the flip side, "Where They Never Say Goodbye." In the meantime, thank you for all that you do on behalf of old time religion. You may make a believer of me yet.

They sure could! They do a heck of a job on "Christ Arose," one of the truly stunning gospel songs, ever. It was one of the "old songs" that got me studying this stuff. And now, 300 songbooks later...

Sure, I can put up "Where They Never Say Goodbye." I just played it on my synth--great number. 1922, Ackley Brothers. Along with Charles Gabriel, the Ackleys had a number of huge hits through Homer, some of them still popular. I can add it to next Sunday's post.

Oh, and of course you know that the Shannon Quartet became The Revellers. Evidently, they increased their size to a quintet.

I did not know the Shannons became the Revellers--another group I admire immensely. Perhaps you could post some of their recordings.

You know, I've been visiting you regularly for years and I have never explicitly thanked you for all the seismic expansions in my tastes for which you are responsible (although my friends do not share my sharp veering to the distant phonographic past). How can I explain what they're missing when every attempt to share glories found here and at Buster's site are ignored? The world of vintage recordings is a lonely one for people like me.

And I'm happy to bring them to you. Thanks for the kind words, and so nice of you to stick around for all these years. To me, the saddest part of the situation you describe--general indifference to distant phonographic past--is that never before have the sounds of the past been so easily available, including recordings I never dreamed I'd hear. Seventy percent of these sounds are free for the streaming or download, even, and sound restoration technology has advanced to the point that the old stuff sounds better than ever. But who cares? On the other hand, there IS a minority of young listeners very interested in these ancient grooves, and that's the good part. That we have young folks listening to recordings that weren't available to folks of our generation--that's the great part. Maybe it makes up for the bad part. You can lead people to amazing things, but you can't make them care. But the good news is that some do--and the internet holds wonders for them.

I think I only have about one Revellers side! Sorry about that. I do have a decent number of Shannon Quartet 78s, though--I can do a post of those. I also went through a history-of-Barbershop phase in which I bought vintage recordings of quartet standards (a number of which are racist, but that's history...), all of which are now sitting at the Internet Archive. Funny--my initial reaction to the IA is, "It's putting us bloggers out of business." But, when I give it rational thought, I realize that's not true. Plus, I can't complain about progress--the IA is just a fantastic resource, at least now that professionals are doing the restorations.

"To THE distant phonographic past," I meant. Hm. The older I get, the more typos I make. I wonder if there's a causal link?