So, here's most of my 2015 Godzilla post (a re-post, actually)--most of the text, I mean.  All of the music is here, including extras.  Then, I'll go to my Facebook Suite, written at a time when I was disenchanted with FB.  I'm getting to that point again, so it might be time for another FB suite.  Anyway... 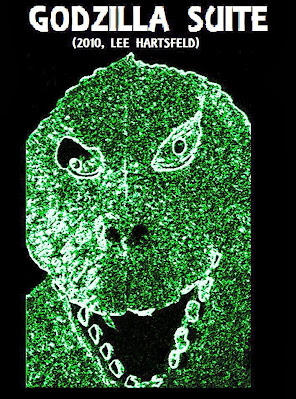 This suite is my eleven-part tribute to the big green guy, plus I've added three bonus Godzilla tracks (is that redundant?), including my 28-year-old "Godzilla Rag."

You'll be hearing both live and step-recorded sounds--some from my Noteworthy Composer program, others from my long-gone Casio CTK-551.  Some tracks, like Godzilla Stomps Into Town, have been heavily altered with echo, time-stretching, multiple sampling, etc., so expect some odd sounds.  But how to musically depict the life, deeds, and many moods of Godzilla without the occasional weird stretch of sound?  No way I can think of.  My multi-tracking went very smoothly, though my sound-on-sound method was pretty primitive--I actually brought up MAGIX twice, and double-tracked in "live" fashion between the two programs.  My PC of the time permitted such things.  This gave me limited mixing control (as in, none), but I didn't lose too much audio along the way. 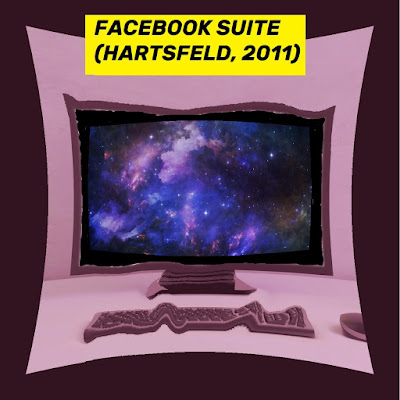 As noted, I wrote this when I was nearly fully fed up with FB.  It was my first time there, and the platform seemed, at the time, to make less sense that it does now, though maybe this was before I finally stopped looking for order in the cyber-universe.  I was probably still expecting an a-b-c-d, 1-2-3-4 kind of linearity.  It was liberating when I gave up searching for order in the overall scheme of cyberspace.
Anyway, "Page Within Page, Link Within Link" beautifully describes FB's non-organizational plan at the time, I think.  As for "Facebook Scams," I don't remember what that referred to--maybe there was FB spam at one time?  I honestly don't remember.  "New Friends" and "Events" are two I-couldn't-think-of-anything-else titles, and I think the former contains the most interesting moments in the suite.  I'm kind of amazed at how much mileage I got out of that simple musical motif (technically, "motive") of C-A-C-A-G-F-G-F, which pops up constantly in different versions.  Why motifs are called "motives" in music, I'll never know.  This assumes there's an actual reason.
My FB music has a sarcastic edge to it, though I'm probably the one person who can hear the sarcasm.  Maybe it's the way I managed to compose music that's alternately intense, languid, and cheerful, even as it describes a "platform" almost totally devoid of character.  Almost--despite all the activity and the endless doorways to different pages--faceless.
On that flattering note...
FACEBOOK SUITE (Lee Hartsfeld, 2011)
1. Page Within Page--Link Within Link
2, Facebook Scams
2, New Friends
4, Events
Lee Hartsfeld, mostly on Casio WK-3800, 2011.
Posted by Lee Hartsfeld at 10:39 PM

Hello Lee:
When I went to your download page it kept asking for my password. Is this something new? I really liked workupload as there were no problems ever getting the downloads. Just curious.

I don't know why it's doing that. I'll switch to Workupload. Sorry about that.

Hi. Things should be working now.

Hello Lee, I wish to Thank You for The Re-Upping of your Great Music Albums there Wicked Good. You have a natural talent with your composures that you have done with the Big Green Guy Godzilla. Have you seen the New Godzilla vs King Kong Movie ? Maybe there could be a 7th Big Green Guy Edition Album By Lee Hartsfeld on The Casio CTK-551, Casio WK-3800, and/or a Noteworthy Composer. Who Knows Maybe a Hollywood Producer or Director might want to have you write a Music Score for an upcoming Hollywood Blockbuster Movie. Again a Big Shout out of Thanks to you Lee. I trust that you & your family are Staying as Safe as one can be expected of during this time of The Dam Virus. The Happy Days are coming Back... So what does Lee have in mind for this Sundays Church Service Music ?... Maybe the Old Rugged Cross song or Blessed Be the Tie That Binds ?... Sincerely, Stan
https://www.youtube.com/watch?v=0G5P396XMuw

Great music Lee. You have a wealth of talent! Love the nod to Godzilla. Have you considered a Rodan Suite or Mothra Suite as a follow up? Love those classic movies. Keep up the good work, I enjoy reading your blog.

Hello Lee
It is working just fine and your compositions are SIMPLY AWESOME, U really enjoyed listening to them.

Thanks for the kind comments! I appreciate it.