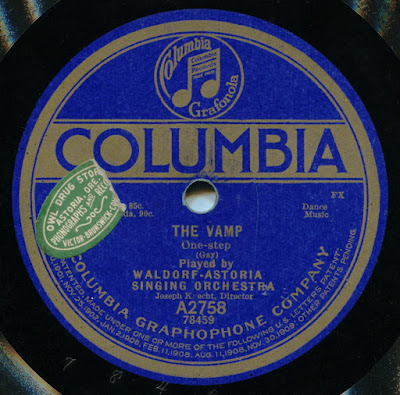 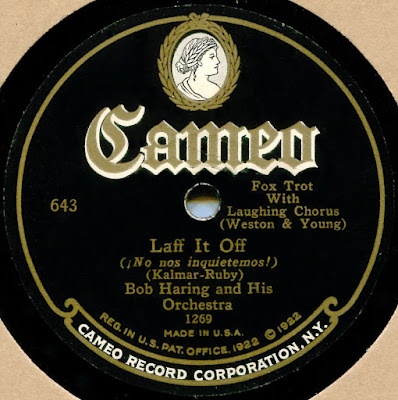 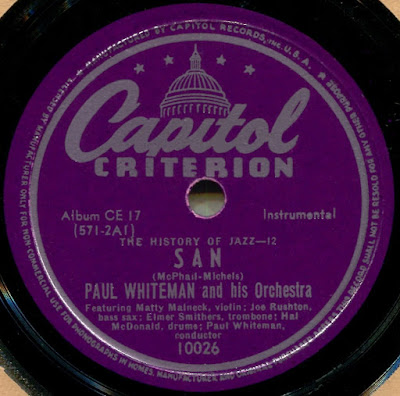 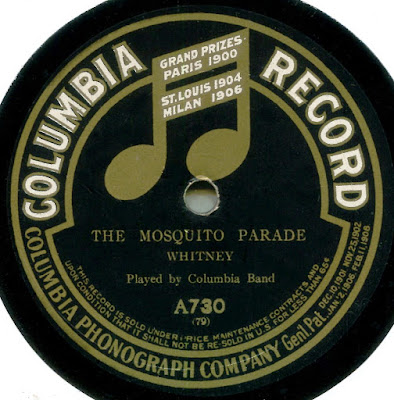 Every 78 rip deserves a second chance, I always say.  Save for two "new" offerings--Yearning (written by Neil Moret) and Laff It Off)--all of today's 78s have previously seen the light of blog, some as recently as three months ago (and some way back in 2017).  But, in each case, I felt I could do a better job with them, and hopefully I have.  In particular, my original rips of Plus Ultra and the ragtime-before-ragtime classic Patrol Comique (composed by Thomas Hindley in1886) seemed to lack proper "bass," and so I experimented with the bass turnover.  (Both are U.S. recordings, so the curves should have conformed to the standard curves, but you know how that goes.)  The 1929 Comique sounds great now, while Plus at least sounds better.  Meanwhile, the 1924 acoustical gems Prince of Wails and Get Lucky (composed by Paul Whiteman's and The Benson Orchestra's Roy Bargy) sound less groove-worn in these new rips.  Paul Whiteman's 1945 re-recording of the Bill Challis-arranged San sounds better than ever, and it's the original 78 from Capitol's History of Jazz, Vol. 2 album set. Meanwhile, Ben Selvin's version of Doin' the Raccoon (as the Knickerbocker Orchestra) and Nat Shilkret's amazingly good Me and My Shadow (sad lyrics, joyous mood) and Out of the Dawn never sounded better--not here, anyway.  Both first showed up at the blog in 2017 and 2019, respectively.  Plus, hopefully much improved rips of the 1918 Wilbur Sweatman classics Ringtail Blues and Bluin' the Blues, from a copy that falls just a little short of VG, condition-wise.  (I'm always hoping to find a better one.)  The Sweatman rips turned out well, though--lots of loud percussion, and much detail in the busy trombone work.  And I decided, just for the heck of it, to re-up my previous (May, 2021) rip of the Black Diamonds Band's Carmen March, from British Zonophone, a 1931 recording that seems to support my long-held opinion that the Brits were ahead of us in the sound-reproduction realm, at least in the early electrical days.   The 1909 (?) Lerhone et al Saone polka evidently refers to two rivers in France, though it's played by the "Banda de Artilleria," which of course is Spanish for "Arteries Band."  Er, I mean, "Artillery Band."  The flip, a reissue of a 1900 recording of the once-famous Mosquito (aka, Mosquitoes') Parade, sounds awesome for 1900, and I'm nearly certain this rip is a step up from my 2017 effort.  The clunky sound of the march is, I believe, intended for comic effect.  And the Waldorf-Astoria "Singing Orchestra"'s 1919 version of  Byron Gay's The Vamp is one of my favorite acoustical 78s ever, even if only one out of every three lyrics are audible (I'm not sure it matters with this particular number).  Knecht's outfit sounded like a looser, less formal version of Joseph C. Smith, and his Waldorf-Astoria sides, both the Columbia and Victor recordings, are usually a joy.  Smith's version of the number is memorable, but it lacks the spirit of crazy fun that makes this side such a priceless novelty.  And, yes, you're hearing passages lifted from Puccini's Madame Butterfly.  Skillfully lifted, imo.
The two "new" sides are the laughing-song classic Laff It Off (Bob Haring, 1924), which features Al Weston and Irene Young performing the laughing-chorus chores.  Laughing records, of course, were an old story by 1924.  Not only had there been the big 1922 hit, The Okeh Laughing Record, but also who-knows-how-many previous laughing-while-singing numbers churned out by a host of British musical hall performers and American comic singers like Cal Stewart (one of whose specialties was the "laughing story").  Many decades before Hollywood and TV "blooper" reels, we had artists breaking up on purpose in front of the recording horn.  The other "new" side is Neil Moret's Yearning, a charming number superlatively arranged for (Charles A.) Prince's Dance Orchestra in 1919, with wonderful and  varied obbligatos around the main melody.  It's just one of a number of pre-Paul Whiteman sides that sound influenced by Whiteman--as in pre-influenced, if such a thing is possible.  Prince (the musical director of Columbia records from 1900-1920) and his musicians made a flawless transition from marching sides to dance numbers, operating in a Joseph C. Smith/Joseph Knecht idiom, and perhaps doing an even better job in it.  To the shellac...
DOWNLOAD: Laff It Off--1900-1945
Laff It Off (Kalmar-Ruby)--Bob Haring and His Orch., Laughing Chorus: Al Weston-Irene Young, 1924.
Plus Ultra--Spanish Fox Trot (Joseph M. Lacalle)--Lacalle Spanish Orchestra, 1926.
San (McPhail-Michels; A: Bill Challis)--Paul Whiteman and His Orchestra (Capitol 10026; 1945).
Yearning (Neil Moret)--Prince's Dance Orchestra, 1919.
Ringtail Blues (Robinson and Williams--Wilbur Sweatman's Original Jazz Band, 1918.
Bluin' the Blues (Ragas)--Same
Doin' the Raccoon (Coots and Klages)--The Knickerbockers (Ben Selvin), with vocal, 1928.
Me and My Shadow (Rose-Jolson-Dryer)--Nat Shilkret and the Victor Orch., V: Johnny Marvin, 1927.
Out of the Dawn (Walter Donaldson)--Same, V: Franklyn Baur, 1928.
Prince of Wails (Elmer Schoebel)--Ralph Williams and His Rainbo Orch., 1924.
Get Lucky--Chicago Stomp or Shimmy (Bargy)--Same.
Patrol Comique (Thomas Hindley)--Victor Orchestra, c. Rosario Bourdon, 1929.
Snakes Hips (Spencer Williams)--Original Memphis Five, 1923.
Carmen March (Bizet)--Black Diamonds Band (Zonophone, U.K., 1931)
The Vamp (Byron Gay)--Waldorf-Astoria Singing Orchestra, Dir. Joseph Knecht, V: Irving and Jack Kaufman, 1919.
Lerhone et al Saone (Polka)--Banda de Artilleria, c. 1909.
The Mosquito Parade (Howard Whitney)--Columbia Band, 1900 (c. 1909 reissue).
Lee
Posted by Lee Hartsfeld at 11:06 PM

I admire your persistence in getting the right sound from these old relics!

I love retailer labels on old records - the Owl Drug Store sticker is a good one.

Hi Lee, Thanks for the set: It's great to hear when you redo records- Always brings more out with different processes, and to our benefit. I realized I own the same record of the Vamp, but never listened to it- I was missing out! Snakes Hips sounded great- the trumpet and trombone really came through. Thanks again for bringing the best out of these!
- Steve in PA

I like retail labels, too--they help bring the history to life. In Scotland, a lot of 78s survived with custom sleeves (for the shops that sold them). I have a small collection of those.

Thanks for the kind words! Glad you liked "Snakes Hips," as I took extra steps to bring out the midrange and "highs" (such as they are on acoustical 78s--roughly 1-3 Hz). And "The Vamp" is kind of an unexpected treasure--incredibly lively for its time. Glad to bring it to your ears' attention!

Thanks for the shellac, Lee. Always a pleasure!

Time seems to sanctify all these old records. Your tinkering for perfection just bolsters my belief these relics are treasures. I can't help but think of you every time I listen to Paul Whiteman or the Revelers. Keep improving your game. It's our gain.

By that way, Bill Challis' opening to "San" would have stopped Hindemith in his tracks.

Thanks for the kind words, and yes, that opening is amazing. I wonder what it sounded like to Whiteman's audience? Not only is it harmonically progressive, but it works superbly as a trick opening--no one expects the musicians to come rushing in with that amazing, energetic quasi-Dixieland sound.

Thank you for the revisit and even-finer refinement of these classics, Lee - they deserve to be heard in all their glory, and you've been doing a wonderful job in seeing to that. Bravissimo, sir!

Another resounding cheer for the local retailer stickers! Adds so much personality to the records. I seem to remember some local slipjackets for 45s/inner sleeves for 33s in my buying era. It's so cool to come across one every now and then. I love the store names, too -- Just for the Record is one of my faves.

Lee, I thought of you all the while I experienced my first prolonged immersion in B.A. Rolfe--whose every record sounded like a testament to the Gershwin-Grofe-Whitemen triad of his time. I'd love to hear your thoughts on this orchestra and for you to share any knowledge you might have of its arrangers and soloists. After an hour or so of listening to records by Rolfe I knew just how wondrously contagious the Gershwin-Grofe-Whiteman spell was. You are the only person I know who really senses the magnitude of influence Grofe had and how much gifted arrangers like Bill Challis owed to him. So I turn to you now and request a posting devoted to Rolfe. By the way, I think Grofe's jazz-band arrangement of Gershwin's Concerto in F is better constructed than Gershwin's own. Amazing to listen to it. I didn't know Grofe was responsible for the famous clarinet glissando at the opening of "Rhapsody in Blue." What a friend Gershwin had in Grofe. I wonder if Ferde had a hand in orchestrating the Second Rhapsody.

Re Grofe and Gershwin, I always felt Grofe contributed more to Rhapsody in Blue than anyone suspects, though I could get myself in trouble for suggesting this. It has a lot of Grofe touches, and I recall hearing some pre-echoes of "Rhapsody" in one of Grofe's novelty piano pieces ("Cyclone," maybe?). I once knew some background on the Second Rhapsody, but the details have fled my memory. I don't believe Grofe was involved in that. Talk about forgotten works! And, believe it or not, I don't have any sides by B.A. Rolfe. All I know is that, according to "Bix: Man and Legend," at Columbia Rolfe pushed the Whiteman band away from the Challis and Satterfield type of jazzy arrangements and further into the "concert" realm--those proto-Percy Faith scores that are inevitably associated with Grofe, but which were also done by others (the commonly mocked "Sweet Sue" was Bill Challis, for instance). That's the whole of my knowledge when it comes to Rolfe. Allegedly, Whiteman was glad to get away from Columbia, but the funny thing is that Paul's post-Columbia Victor sides were even MORE formally and fancily arranged. Grofe departed around that time, and, according to Grofe, Whiteman did everything he could to hurt Grofe's chances as a solo act, feeling betrayed by Ferde. I don't go along with the standard stereotypes of Grofe as the anti-Bix, anti-jazz arranger in the Whiteman band, given that Grofe's jazzy pre-Challis scores provided the foundation for the progressive direction the band took circa 1927. Grofe is much underrated, and I regard Grofe and Challis as two of the architects of the big band sound--seriously.

Just listen to that famous ragged-brass dissonance and piano splashes of Rhapsody, then turn to their distinctive re-echoings in the Cloudburst section of Grand Canyon and you get a good sense of what Gershwin owed to Grofe. The debt is enormous, but paid in full.