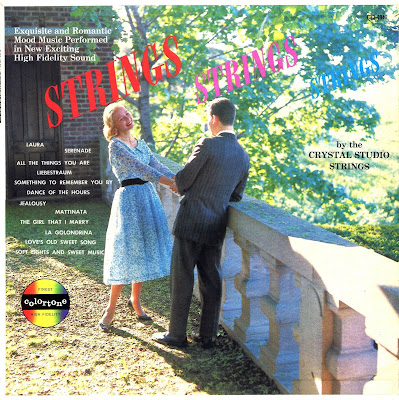 I'd prefer the Waldorf Strings in Stereo version of this LP, but this is the one I found--the mono (Strings Strings Strings), on Colortone, directed by Stuart Phillips (not credited on this edition).  Stuart, as Stu Phillips, is of course best known for his Hollyridge Strings LPs on Capitol, which include The Beatles Songbook, The Beach Boys Songbook, and the Christmas Favorites album.  He's also a film and TV composer--Hell's Angels on Wheels, Beyond the Valley of the Dolls, Switch, Battlestar Gallactica, The Fall Guy, etc.  Here--and I'm assuming he was the arranger--Stu is giving us superb, dreamy easy listening of a type which falls someplace between Percy Faith and Hugo Winterhalter--"Percy Faith on caffeine" is a phrase that came to mind as I was listening one of the bands, though that's kind of silly.  And it occurs to me that the budget labels, come the late 1950s and early 1960s, were providing mood music of an earlier type, all while Andre Kostelanetz, Faith, and other easy listening maestros were going for a more pop-beat-oriented variety, in keeping with the rock and roll and showtune music of that time.  The budgets were the place for older, most languid pop instrumentals.  Which is fine with me.

The 1959 audio is very good, despite the inexpensive, hard-vinyl type of pressing (I don't think Waldorf saved its best vinyl for the Colortone line), and I imagine (though I can't be sure) that the stereo mix is memorable.  Some P.D. concert works tossed in, including the ultimate such chestnut, Liszt's Liebestraum, which Stu refreshingly treats like a Johann Strauss, Jr. waltz (for a literal change of pace), to fun effect.  Interesting to hear the number treated like a waltz for dancing, and on a mood LP, no less.  Nothing soporific about any of these selections--the LP just expertly glides along from first groove to last, and it was nice to have a mostly event-free ripping experience here--someone took very good care of this disc (and the jacket).

"Exquisite and Romantic Mood Music Performed in New Exciting High Fidelity Sound."  The lower-priced labels were so humble about such things...

Here's a pic of the stereo edition, from eBay, where it's on set sale for a not-low price: 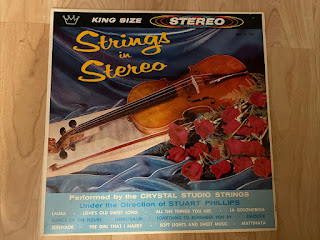 Interesting. I didn't know Stu Phillips went back any further than his work for Capitol. Nice find, Lee!

Thanks! I vaguely remember owning this years ago--the title and cover art are very familiar. I didn't delve deeply enough into Discogs to uncover this--its "Stuart Phillips" listings are fragmented.

Hi Lee, Thanks for a great album. I have had it lately on my mp3 player as a rotation collection. Really enjoy this one. Bryan.

The Hollyridge Strings '60s work on Christmas tunes is superb! I always feel so lucky when I find it, even if it's just a tune or two on a compilation. Gotta be hard to bring new life to such overplayed songs. But these do it.