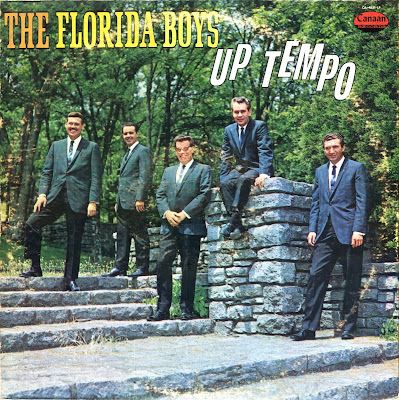 Save for one track (Who Am I), the Florida Boys' 1967 gem Up Tempo lives up to its title--these tracks are all (save for that thoughtful and soulful track) fast-moving, inspiring, and great fun.  This superbly professional group consists (well, consisted) of Tommy Atwood (first tenor), Lee Beasley (lead), Glen Allred (baritone), and Billy Todd (bass).  The pianist is Derrell Stewart, and everyone save Tommy (who had just joined) is described in the notes as a veteran in the Florida Boys, which may seem kind of tautological (sort of like calling Mick Jagger a "veteran" of the Rolling Stones), but Southern quartets, very much like the R&B vocal groups of early rock and roll, switched personnel pretty routinely, so it makes sense to talk about the "veterans" of a given quartet.  I suppose they could even be called the "survivors."  "Stalwarts," maybe.  No, that's not quite right.  But, anyway...

The accompanists, besides pianist Derrell Stewart, are Pete Drake (talking guitar), Buddy Harmon (drums), Bob Moore (bass), and Harold Bradley (guitar).  Now you know.  "We feel sure you will agree with us that this is the GREATEST YET by the Florida Boys," proclaim the notes.  Hm.  I thought it was called Up Tempo.

Luckily, today's disc isn't nearly as worn as the front cover--I don't know what happened there.   I can only guess that this LP sat in a big stack for, oh, twenty years or more.  I did some touch-up, so the mid-jacket wear is mostly filled in, but you can still see the big ring caused by the exterior of the disc.  But, when I spotted this in Goodwill, my attention was on the song listing--and when I see The Fire Song, Count Your Blessings, Palms of Victory, and Higher Ground all on the same LP, I know I'm looking at a must-have collection.  Well, unless the vinyl would happen to be trashed (or the wrong record  enclosed), but neither was the case here.  I was in business.  I knew instantly that buying this LP was my Goodwill-visit destiny.  My purpose for being there.  Fate--it's not just a magazine.

Palms of Victory, aka several other titles (including Deliverance Will Come), dates from 1836, and what it would be like to have had recording technology back then--imagine hearing field recordings of early-19th-century camp meetings.  The Florida Boys do this classic proud, and they do the same with Charles Gabriel's Higher Ground, Edwin Excell's Count Your Blessings, and the forever-associated-with-the-Carter-Family The Fire Song.  Logically speaking, Fire Song should be associated with Woody Guthrie, who used its melody for This Land Is Your Land, that patriotic anthem which was actually intended as sardonic commentary (so it goes, sometimes).  I'm convinced, by the way, that Guthrie's original recording of This Land was made just after he'd heard the original Carter version, because it's at the same tempo, in the same key, and features the same accompaniment.  These three things don't happen by accident, especially with simple numbers.

One thing surprised me about this album: the liner notes, which read like something off of a custom-pressed effort:  For example: "The true ringing voice of (Tommy Atwood) has added a definite spark of 'excitement' to the overall sound of one of the Nation's most outstanding singing groups, The Florida Boys."  Unless the writer meant "excitement" to be taken ironically, the quotes are out of place, and of course "Nation" is not a proper noun--unless, for example, we're talking the magazine  So it shouldn't be capitalized.  But I'm being a killjoy.  This is a first-class gospel LP, so who cares what I think about the notes?  And who reads them, anyway?  (Er, but I hope you read my essays.)  Time to say, "Enjoy the gospel."

I'm probably telling you something you already know, but the backing musicians were all among the best Nashville had to offer. Bob Moore even had a hit of his own with "Mexico" - a great record that I'm sure inspired Herb Alpert.

I do read your essays and enjoy them!

Actually, that's new information to me. Doesn't surprise me, since Word was such a class outfit. Thanks for the nice words about my ramblings!

I recognized most of those backing names, too. Sometimes I wonder if those busy studio musicians made more money than the "stars" -- no managers, agents, fancy stage clothes/makeup, or hangers-on to pay.

Lee,
Thanks for this album. As seems to be the case more than not, I've heard most of these songs, but didn't know they were all on the same record LOL! Buster beat me to it, on the studio musicians. The only one from the group, was Stewart, whom they dubbed Red Socks. If memory serves me correctly (and it may or may not LOL), I believe, no matter how he was dressed on stage, he always wore red socks, probably especially after the nick name. Also, on the essays, sometimes, they are so good, that I find myself downloading stuff I really don't need, especially of a secular nature. LOL! All due respect, you understand, I'm sure. You know my music taste by now LOL! Appreciate all the time/effort, love and prayin' for ya!

Thanks for the nice words on my essays, and always great to hear from you!