Sing Along With Waldorf: That Old Gang of Mine--Brigadier Quartet, The Cruisers, and Suzy Lockwood (1957) 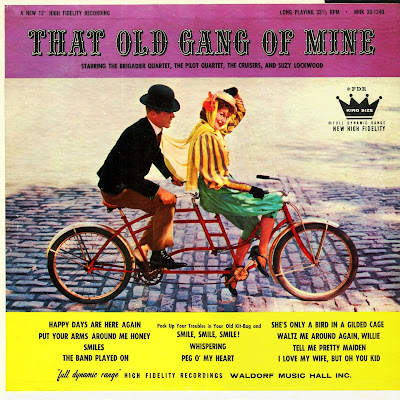 Interestingly, this late-1957 Waldorf LP beat the first Sing Along With Mitch LP to the racks by at least a month, though I suspect Mitch Miller's LP got a lot more exposure.  (Something just tells me...)  Had Waldrof used larger male choruses and tons of echo, it may have achieved a sound just like Mitch's--as it stands, though, these can't compete with Mitch in the fullness-of-fidelity department.  The spirit is there, however, and I really love the banjo choruses where they appear.  Of course, as Mitch himself admitted, the sing-along idea was anything but new in the late 1950s--Milton Berle had done it on radio, and Art Mooney's postwar faux-1920s records (including the big-selling 1947 I'm Looking Over a Four Leaf Clover) were pure sing-along, and folks like Frankie Carle and Beatrice Kay (and a lot more people I can't think of at the moment) were doing ragtime-era revival material about the same time, with Joe "Fingers" Carr (Lou Busch), Del Wood, and Pee Wee Hunt soon to follow.  The whole "old songs" concept goes to the late 19th century, at least as far as song collections are concerned, which only goes to show that that "old" is a concept subject to constant revision.

This jacket, with its Daisy Bell (Bicycle Built for Two)-inspired cover, suggests the "Gay 90s," but in fact only two of the numbers fit that bill--The Band Played On (1895) and Tell Me Pretty Maiden (1899).  The rest span the years 1900 (She's Only a Bird in a Gilded Cage) to 1929 (Happy Days Are Here Again).  This sort of time-period mixing is standard procedure: I have at least two song folios, both allegedly devoted to songs of the 1890s, which feature numbers dating as far back as 1840 (Kathleen Mavourneen), 1871 (Reuben and Rachel), and 1884 (While Strolling Through the Park One Day), and as far forward as 1921's California, Here I Come.  But what's an 80-plus-year window or two?  I mean, who's keeping track?

Anyway, this LP sticks to a 34-year span, so maybe that helps in the authenticity department, though none of these performances sound like the vintage disc or cylinder renditions of these tunes.  Well, not that we'd expect them to, but...  I do think it helps that Waldorf lacked the budget for a Mitch Miller-level production--minus the ultra-reverb and somewhat robotic Männerchor sound of Mitch's sing-alongs, these renditions have a more natural and "live" effect.  Sometimes cheaper is better.

So, get ready for "songs of smiles and of happy days...of tender whispers and tight embraces...of pretty maidens and breathtaking waltzes."  Prepare yourself for "melodies of a bright and buoyant age, of a time when ladies and gentlemen bared and shared their feelings together in song and in dance...when a feeling of real togetherness permeated their music and their very lives."  And here we have the real definition of "nostalgia" as it pertains to era: namely, no period in particular.  A time when... something.  That great era of... whatever.  Right now, I'm picturing someone in the 15th century complaining, "Whatever happened to the good old street songs?"

Posted by Lee Hartsfeld at 8:51 PM

Strangely enough, I couldn't stand the bowler-hat-and-arm-garters crowd even when I was a kid. But I didn't mind hokey singing groups. Even Mitch and his Sing-Along Zombies were OK with me.

I used to have all of Mitch's sing-along LPs--over the years, I must have owned at least four times as many LPs and 78s as I now harbor. I was absolutely sure (false memory time) that Mitch had said that the all-male sound on his "Sing Along With" LPs was inspired by the male choruses in German opera, and I was sure the quote was in his 1985 Audio magazine interview. I still have Part 2 of that interview, and he does discuss the sing-along LPs (and show), but nothing about Germans or opera. Mitch had some reason for going with male voices as opposed to a mixed chorus, but I can't tell you what it was. The sing-along tradition is one of the least-defined genres of all--an amalgam of concert hall songs, "home" songs, glees, tavern tunes, hymns, and whatnot. Anything from Stephen Foster to "99 Bottles of Beer."

Hi Lee,
Thanks for another Enoch Light LP to add to my collection. Very interesting LP. Reminds me of seeing those old 20th Century-Fox musicals on TV during my summer holidays as a kid. Faye, Grable, Haver, e.g. I seem to remember they had a lot of musicals with this type of music from some other studios too. Thinking about it now, I am guessing the songs were either cheap to get the rights to and/or they were out of copyright. I really enjoyed them though.
Bryan

Omigosh, that's a perceptive comment! Try this chorus from Der Freischutz for both the sound and the spirit of Mitch's Merry Men:

What a delightful essay -- you not only do your research, you make it fun (for us, anyway). I've always wondered about those all-male Mitch Miller sing-along LPs. I much prefer the both-genders sound of his "Christmas" disc.

Thanks much. Wish I could remember Mitch's reasons for usually employing all-male choruses (besides his being inspired by German operas).

I liked her a lot, too. She adds considerably to the LP.

Glad you enjoyed. And the older titles might have been P.D. by then, or at least low-cost, royalty-wise. I don't know how closely publishers clung to the copyrights on the early 1900s titles, seeing as they had no way to predict how famous the songs would remain.

Lee.... You did it again, Tiss A Great Old Album Here. When I was a boy growing up here in Vermont. I was able meet Mr. Mitch Miller & His Gang of Singers at a Ski Resort in Stowe, VT one Winter Season. The Fireplace was going strong and so was the Singers and folks there it was a Grand Old Time I have not ever forgotten. Years later On Old Cape Code there was a Place Called "Your Fathers Mustache", this place was known for there Dixie Land Bands and Famous Singers there with Barrels of Circus Elephant Peanuts and all of those empty shells were all over the place everywhere, and Yes the Band and singers and the Workers there too all had the Wardrobe of the 1930 and some great times were had at this place, but years later sadly the place caught Fire and it was a total loss, sadly it was not ever rebuilt. But the memories and songs still linger in my mind. It seems to me that American needs these great places and songs too, as it would make a comeback, as it would bring back the Spirt of America once again... Lee you be the Organ Grinder and the Piano Man, you must admit it, being all dressed up in 1930 clothes and toe tapping to some Dixie Land Tunes and having fun in such a place would be interesting for everyone there. Lee please keep up your great finds among with those other Albums too. Maybe you Lee might want to do an Album with yourself at the Keyboards joining into some great Dixie Land Music... Have a Fun Summer, Take Care and Thank You, Stan