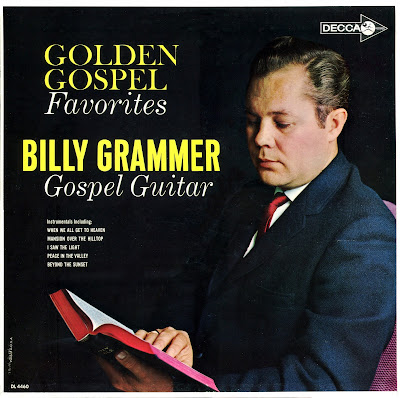 Okay, so it's Sunday night, not morning, but let's not quibble over technicalities.  I very nearly had this ready for a morning post, but I didn't quite make the deadline, and then I was going to do it as a Sunday afternoon post, but then TCM decided to run the fabulous 1946 The Best Years of Our Lives, and I had to watch it.  (If you've never caught that superb film, please do.)  Next thing I know, the evening news was on, and then I was channel-surfing and I fell asleep.  These things happen, especially when you've "hit the big 6-0."  I have to face it--I'm a senior.  There.  I said it.

Anyway, this 1964 Decca LP is another thrift gift from Diane, and I figured there was no way to miss with a Grade-A country session guitarist performing standard gospel numbers like Mansion Over the Hilltop, When We All Get to Heaven, and A Child of the King, and I was right--these tracks are terrific, and in that unassuming, un-showoff-y way that only ridiculously good musicians can manage in a major label session.  This has "Can't miss" written all over it, and, luckily, it was written in grease pencil, and so it was easily removed with Goo Gone.  Ink would have been a whole different matter.

And, for once, we have clever liner notes--something you don't always encounter on gospel efforts.  Billy's "ex-boss and biggest fan" Connie B. Gray gives us a Grammer bio in the form of reminiscences, with a clever pun tossed in ("good grammar" vs. "good Grammer").  Nothing genius-level, but refreshingly literate.  Decca only provided author/composer credit for five of the numbers (presumably, the non-P.D. ones), and so I looked up that info for you on the mp3 ID tags.  All except for one track, that is--Where We'll Never Grow Old.  That's because this number exists in two versions, both close enough to be the same song.  I refer to James C. Moore's Never Grow Old and the late-19th-century That Beautiful Land, so you get to take your pick.  I suppose logic dictates going with the earlier manifestation of the number, but it's your call.

Great background gospel here, and if background gospel isn't an official music genre, it should be.  These are relaxing, meditative sounds which work beautifully as such because they're all old friends to the gospel fan.  This LP was preceded by Billy Grammer's Gospel Guitar, with Gospel Guitar cleverly used as the subtitle here.  I don't know why that would be a clever tactic, but it just has a clever feel to it.   And I have no idea what I just typed.

To the good Grammer.  Oh, and Decca wants us to know that "This is a high-fidelity record!"  With an exclamation point.

When We All Get to Heaven
The Ninety and Nine
Mansion Over the HilltopA Child of the King
I Am Resolved
Where We'll Never Grow Old
I Saw the Light (Hank Williams)
There'll Be Peace in the Valley for Me
A Volunteer for Jesus (Aka, As a Volunteer; Brown-Gabriel)
Beyond the Sunset
Onward Christian Soldiers
(God Be With You) Till We Meet Again

Sounds High Fidelity! to me. Thanks for sharing.

So happy that this thrift find worked out for you. And now for us! Thanks, Lee, as always.

I have a few LPs by this gent, but didn't know he played gospel music. Thanks!