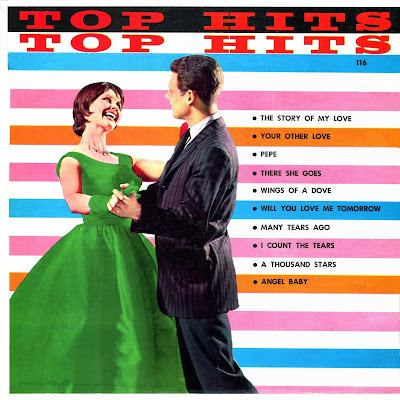 I couldn't remember what I was going to call this post--"Firework of Fakes," maybe?  Or "Fireworks of Fakes"?  Then it came back to me--"Fakes for the Fourth."  So simple, so efficient.  And so easy to space out.

So, we have an actual couple (i.e., real people) on the cover, as opposed to the usual amateurish line drawing of a couple, which is nice.  And we know for sure this is an SPC (Synthetic Plastics Co.) product.  We have three major clues: 1) The terrible pressing, 2) The "Promenade Orchestra and Chorus" credit, and 3) The words "Manufactured by Synthetic Plastics Co." on the back cover.  That third one is the clincher.  Technically, this doesn't even have a label name, unless "Top Hits" is meant to function as both the LP and label titles.  I wouldn't put that past SPC.

Despite all this, the fakes are unusually good this time around--I enjoyed every track, including the weirdly sung Will You Love Me Tomorrow, that Carole King and Gerry Goffin classic for The Shirelles.  Here, the lead singer sounds too old (too old to be having a "Did I go too far?" self-session, at least), and she enunciates the words oddly.  But the track only cost a dime, originally, and it only cost me a nickel (half-off day at Goodwill on the 3rd), so I can't complain.  I'm simply observing.

Thanks to the miracles of digital sound editing (plus, two copies of the LP, so I could swap tracks when necessary), I was able to get the audio up to near-legit levels.  Getting these crackly (even when mint) SPC wonders to sound like anything but crap is the challenge, and I met it well, I think.  Really, most of the credit goes to the two programs I use, but I prefer to give myself the glory, for reasons of ego.  For scanning, I chose the cleaner of the two jackets, though it was cut way off center on both sides.  Three photo programs to the rescue, and I got things level by creating new white margins.

Normally, I'd have checked the Promenade EP versions of these tracks to find the (fake) artist credits, but by this time, SPC had stopped concocting amusing pseudonyms--its EPs were employing the same lame catch-all as this LP ("The Promenade Orchestra and Chorus").  So it goes.

Fakes for the Fourth.  Ten nifty knockoffs.  And Workupload has been in maintenance mode all day, so the link will take you to Box.com.  Enjoy!

That cover looks almost professional, except for the genericness...

Thanks again for the music, Lee!

This was an interesting time in music - the non-rock rock period. Almost all of these songs are country or pop. I'm not complaining, just observing, mind you - I like these numbers. I believe I have the Rosie and the Originals, Shirelles, Jerry Wallace and Ferlin Husky LPs, and probably others.

How do you define rock? To me, this music mostly sounds like 1961 rock and roll, save for the country numbers. I hear a huge African-American influence, plus song types that hugely influenced the Beatles, Beach Boys, Turtles, and so on. Rock is sort of a myth, really, given that it's typically defined as some combination of blues and country. A notion that has me wondering exactly where the country content is to be found in "Earth Angel," "Gee," "Annie Had a Baby," or the vocal antics of the Marcels. Not trying to argue (-:, but I think "rock" has always been a fluid category, if I'm using that adjective correctly.

Thanks for the Great Memories of Yesteryears Gone by. I hope the folks like you and I appreciate the fine work you do. I know the Aliens and Robots do.. Take Care and keep up up the Navy Spirit.

Lee, Watch out for those M-90's they have a real charge to them.. Happy 4th of July 2021 Thanks for everything.

Hi Lee, sorry for the late reply. This cover lp contains two of my favorites.
A Thousand Stars and Angel Baby. These covers were well done. Thanks for the share. Bryan

Thanks, Stan! Hope you had a great Fourth.

Glad you enjoyed--I loved this version of "A Thousand Stars," too. I'm pretty surprised at the quality of this LP (and the other one I scored at Goodwill--also an SPC issue). SPC must have had a lot of superior studio pros working under the table about this time (1961, most likely).

My pleasure. And that was the usual rule with the EPs vs. the LPs, at least with SPC--the singles are always shortened (so as to stick six selections on one EP). One surprising thing about SPC, given its super-low budget, was how expertly it edited its tracks. That is, I think they literally spliced things down (as opposed to doing two different takes). The splicing work on the junk labels was amazingly professional, in general.

Fun stuff, Lee! We're currently visiting family on the east coast, so of course I hit a local Goodwill. Its few LPs were $1.59 each. Now I can't wait to get back to our midwest GWs with 100s of 29-cent wonders!